Co. Down ice cream rises to top in indulgence market

A trip to an orchard near Ljubljana, Slovenia, proved to be a ‘light bulb’ moment for Co. Down farmer, Will Taylor, who is now known for the production of ice cream.

The Taylor family have been dairy farming on the Ards Peninsula since 1856. The sixth generation, Gareth and Liz, are in charge of the day-to-day decision making for the 300-strong pedigree dairy herd.

Parents, Will and Cynthia, lead the offshoot company in the production of dessert ice creams and sorbets, which have been commended by top chefs. “We have a 2.5 million litre annual output from our herd, of which about 18% currently goes to ice cream,” said Will Taylor.

The 150ha owner-occupied farm is mainly grass-based, with a small area of forage maize in an 850mm rainfall area. “Our unique selling point is the farm; the grassland/clover swards; the pedigree dairy herd; and the high quality raw material – in terms of compositional and bacteriological standard. It is all on one site, audited and approved,” said Taylor.

The farm has attracted accolades over the years, including the UK’s Grassland Farm of the Year and Northern Ireland’s Dairy Farm of the Year. It was also a ‘Focus Farm,’ demonstrating good practice and innovation to fellow farmers and groups.

Will Taylor was on the Slovenian trip after receiving the Frank Arden Award from the Nuffield Farming Scholarship Trust in 2004. “It is offered every two-to-three years as a subject area emerges of fundamental importance to the agri-food industry.

“The management board selects the subject area and short-lists a number of previous Nuffield scholars who fit their criteria to bring forward a report. In 2004 and 2005, the ‘big’ subject was the accession of the eastern European countries into the EU.

The report ‘Opportunities for the UK agri-food industry in the new Europe’ looks a bit sick, with the latest decision on Brexit.

“Both products were exported to neighbouring EU countries, as well as supplying the home market. The farm was clearly a success story of an integrated food business, despite the relatively small scale, in UK terms.

“I mentally benchmarked my 140ha business, producing 2 million litres plus of milk that, by compositional and bacteriological standards, was in the top 3% of milk produced anywhere in Northern Ireland. At that point, Glastry Farm Ice-cream was born,” Taylor said. 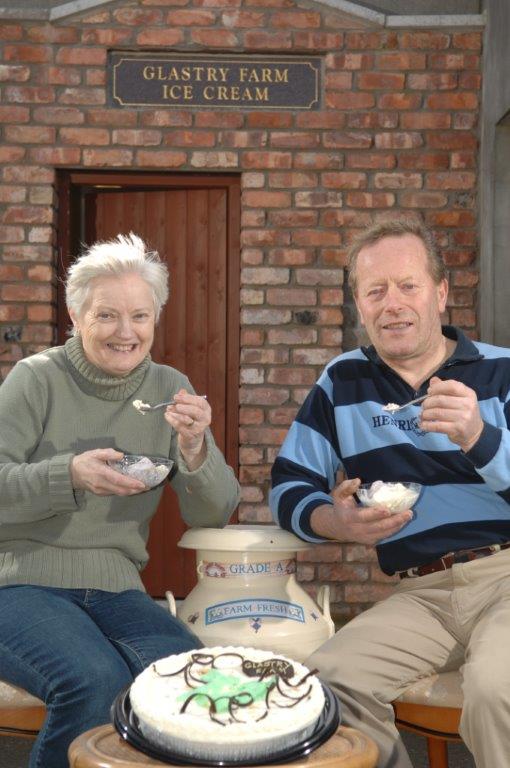 “We launched a market research study in 2005, with help from the University of Ulster School of Entrepreneurship. The results of those findings were channelled into a product development programme at the Food Technology Centre during 2006.”

The Glastry range was launched in January 2007. Its packaging was designed to illustrate the vision and ethos of the family’s base on a working farm, in an Area of Outstanding Natural Beauty (AONB). “The brand incorporated the name of the townland, Glastry, which means ‘the townland of the green pastures,’ and the word ‘farm’, to emphasise the origin,” said Taylor.

“Independent accreditation is absolutely crucial to our business, and reasonably unusual in the frozen food sector, in that we have total control of the process from the grass and clovers that the dairy cows eat to the final product.

“The approvals are further enhanced by Great Taste Awards from the Guild of Fine Food and the Irish Food Awards, with blind tasting of products by panels of restaurateurs, food writers, chefs, food buyers and distributors,” Taylor said.

“The journey over the past 10 years is one of detailed preparation, in terms of market research, an initial product development programme and an ongoing innovation and development strategy, with a team that is committed to the development of our business and has the flair, expertise and technical knowledge that will deliver commercially-robust products,” he said.

“We are very aware that seven out of 10 new products are de-listed within a year of their launch, so we are very proud of the fact that six out of seven of the original group of products launched in January 2007 have survived 10 years to date.

“The graphics for the packaging have changed to a more confident and bold imagery, while the detail of the product declarations and writings is amended by legislation at virtually every print run. It is a very expensive process in getting it right and an even more financially damaging experience if the declarations do not comply with Trading Standards guidelines, and product recall is required,” he said.

The aim, Taylor said, is to ensure succession of the next generation within the business, creating additional sustainable incomes for two generations of the family.

“We have completed a decade since the concept of adding value to our primary raw material was instigated.

“The vision for the next decade is formulated. In an era post-milk quotas, where commercial reality will take the place of artificial constraints on production, market research will be intensified. There will be a focus on innovation, in terms of new products and processes enlarged,” Taylor said.

“We brought in marketing, innovation, and research and development disciplines, initially; much of their findings and advice are as relevant in 2017 as they were 10 years ago, indeed more relevant, in terms of trends within the food industry.”

We have obtained planning permission for a new build on the farm which will be a multiple of eight larger.

“Our production profile is 12 months of the year. 80% of output goes to food service, to some of the most prestigious chefs and outlets in Ireland, with a customer base that stretches from Tramore to Dunfanaghy; and from Westport to Ballywalter.

“Our peak production would be equal in November and December to the summer months. We are currently in production for a United Arab Emirates customer, which will be seasonal, from October to April. “At 55º in the shade last week, there are few visitors in Dubai’s 25 6-star hotels,” he said.

“The Irish market was blessed with an early and sunny spring – we tend to forget quickly, these things – which brought the indulgence market to life much earlier than normal.

“That higher level of trading has been maintained, as consumers trade up to premium brands. We, obviously, are part of that more premium market. It is also a reflection of the new confidence in consumer spending as the overall economy recovers from the ‘the crash’.

“This recovery is most pronounced in the greater Dublin area and the influx of visitor spend,” Taylor concluded.