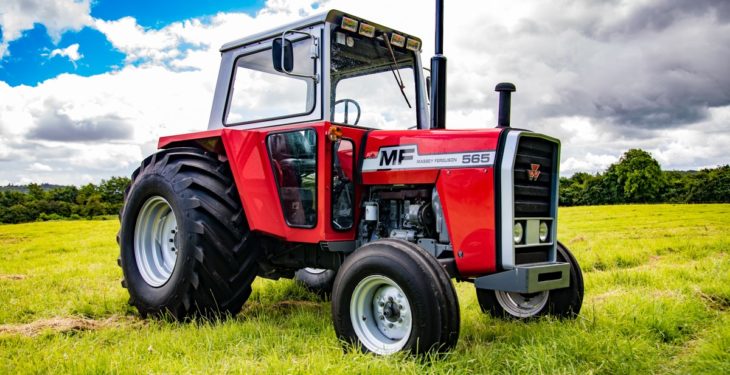 Henry Eyre from Co. Carlow bought this Massey Ferguson 565 five years ago. Having spent a couple of years – on and off – bringing it back to its former glory he is now selling it.

It’s certainly a tractor that will stir nostalgic sentiments for many; MF 500 Series tractors were once a very common sight up and down the country. They are now getting increasingly scarce – some have succumbed to corrosion; others have long since been snapped up and shipped out by exporters.

Why did you pick a Massey Ferguson 565 as a project?

The tractor came up for sale; I wasn’t actually looking specifically for a 500 Series model. I needed a small tractor for practical reasons; at the time my house was heated by a [wood] log gasification boiler. I wanted the tractor to draw small amounts of timber and to work the log splitter.

I was also willing to consider a tractor that needed work doing to it; possibly even one crying out to be restored.

I’m not a farmer; I work full-time as a panel beater on cars. I don’t have other work to keep a tractor busy, so I didn’t want to spend too much.

It was a local machine; it had been used most recently for golf course upkeep. It came up for sale and I was keen on it.

The tractor was very good mechanically – I had no worries there – but it was a bit rough to look at. That’s not surprising; it was built all the way back in 1976. It actually has 9,000 hours on the clock now. 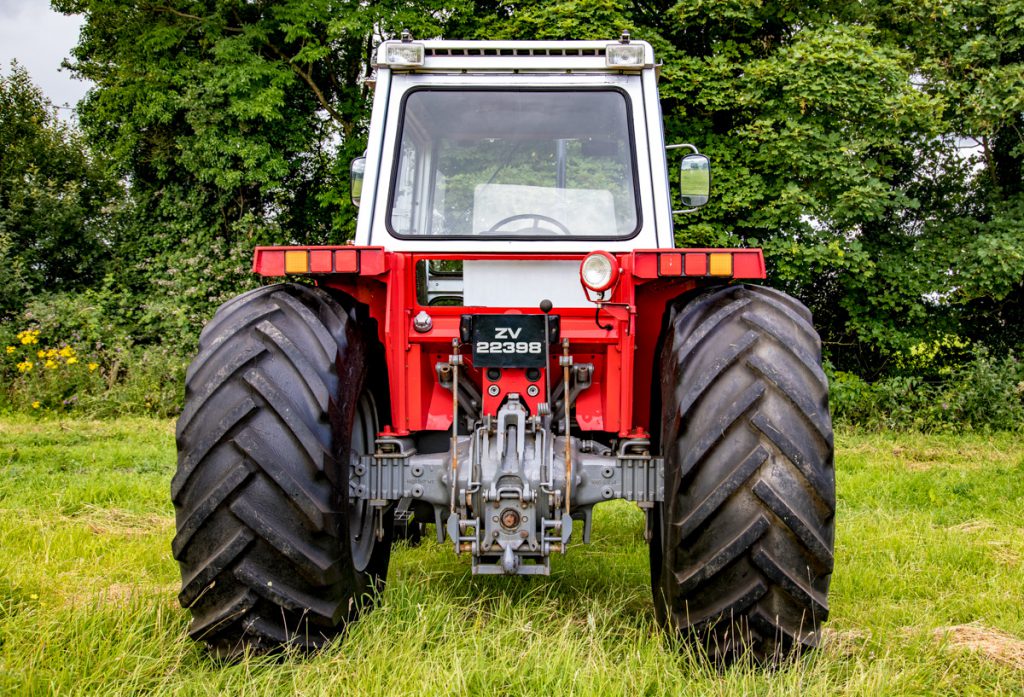 From everything I knew, the tractor was reliable. In fact, the only reason it was being sold was because it didn’t have an independent PTO. The ‘live’ version didn’t suit the machines it was working on the golf course. They probably needed something a bit more modern.

In the end I bought it; I had also considered a couple of Leylands for about the same money – but I’m glad I went for the MF.

Mechanically, things worked fine. I did do [fix] the brakes, fitted new hydraulic pipes and replaced the steering track rods – and other jobs like that. However, major items like the engine and gearbox didn’t need ‘surgery’. 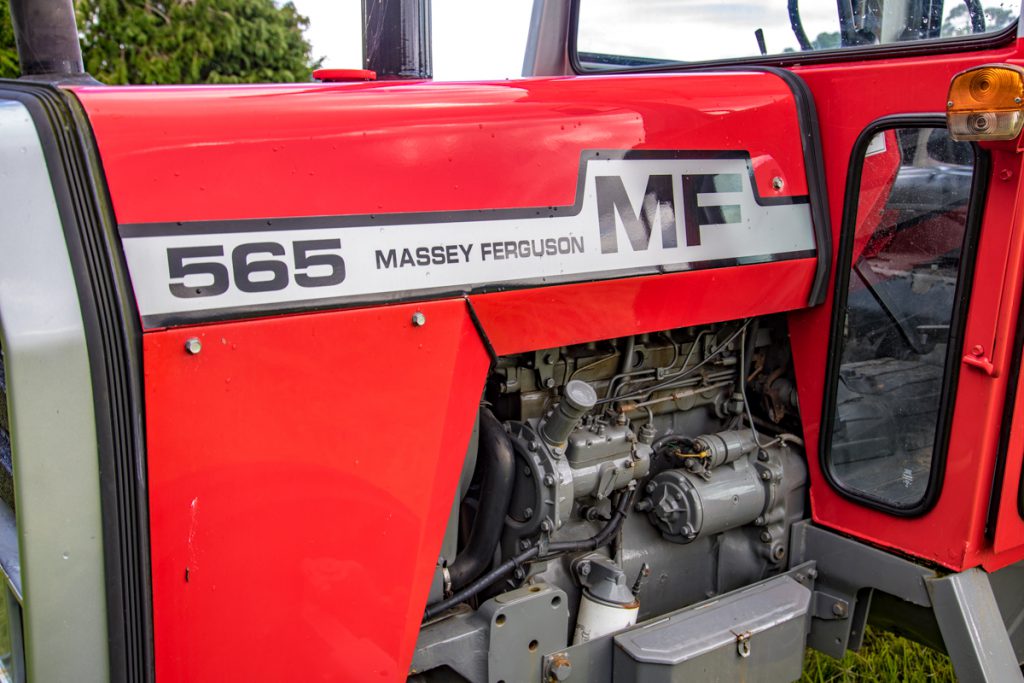 However, the tractor’s overall appearance was poor – especially in and around the cab. For example, one of the doors was missing and the whole front of the cab, where the front windscreen was held in, was in very bad shape. The mudguards and panels needed work too; it really was crying out for a cosmetic restoration.

When the cab was lifted off, I sand-blasted the tractor; then the primer and paint went on. The bonnet and some of the other panels were in reasonably good, ‘square’ condition; some just needed to be cleaned and painted. These were done to a car-like finish.

There are a few ‘modern‘ improvements, including LED lights on the rear of the cab. 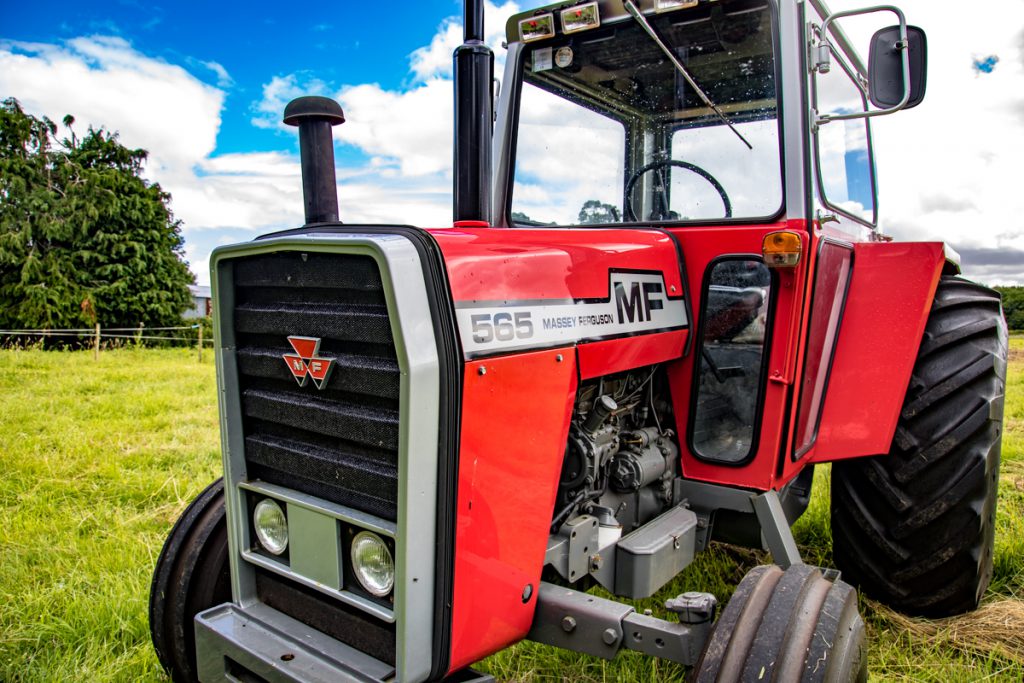 A lot of time was spent getting the cab back to its original – or, in places, better – condition. I had to fabricate some parts; it took two old doors [which each became ‘donors’] to re-fabricate one ‘new’ replacement on the left-hand side. 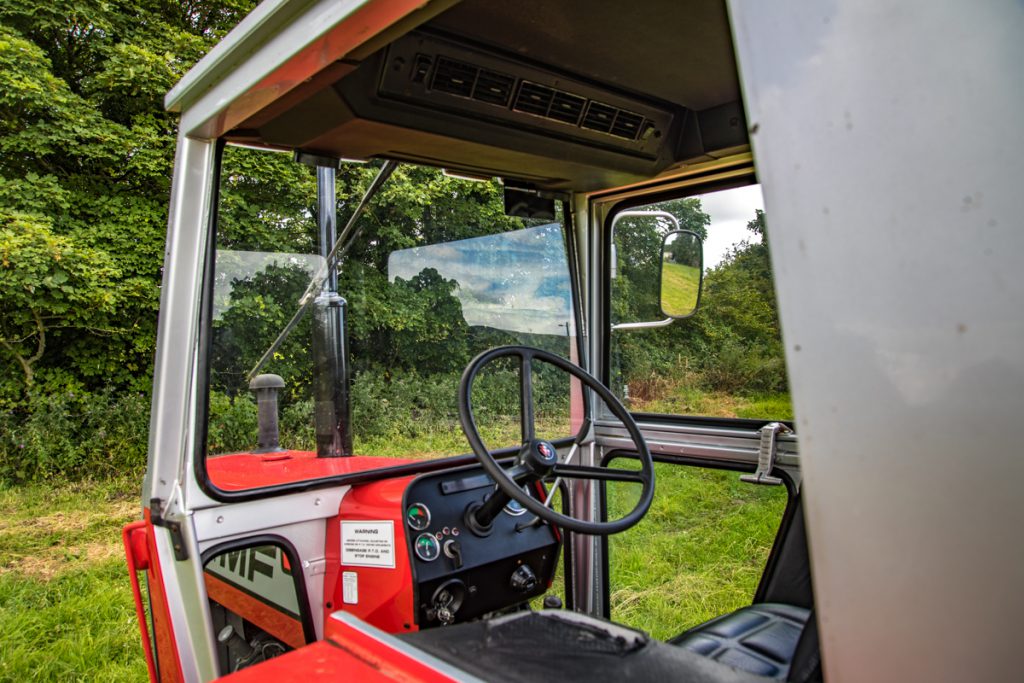 The replacement rear mudguards also had to be fabricated; I made those wider than the originals – for practical reasons.

Nothing really jumps out, apart from a small vent at the back of the cab [manufactured from fibre glass]. Those parts aren’t made anymore; I had to get one off my uncle’s 500 Series tractor and get a friend to make a duplicate.

The project did swallow up a lot of time. I started just after I got the tractor; working at it on and off in the evenings and weekends.

After 18 months my first-born child arrived – so the restoration took a back seat for about six months; after another six months it was more or less finished. 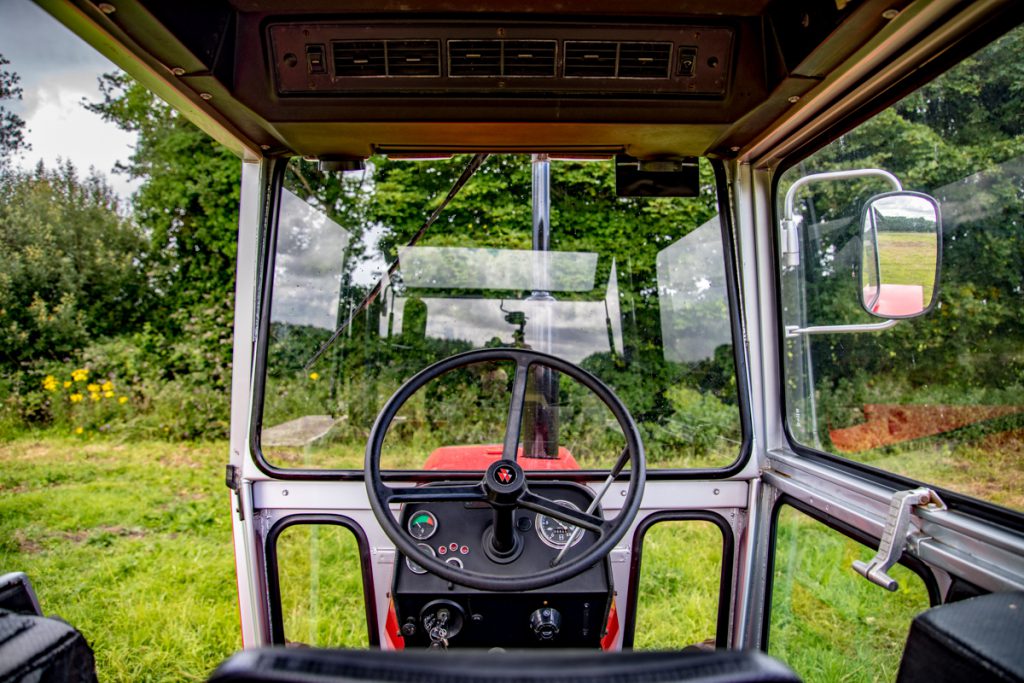 I’m selling it now; I’ve had it for five years. I don’t actually need a tractor now, as I’ve changed away from a wood boiler in the house – so I don’t need to work a log splitter or draw a trailer.

Recently, the tractor’s only outings have been local road runs and vintage events. It does attract plenty of attention; it does look sharp up close.

I also don’t have anywhere to store it at the moment; I only have room for cars around the house. When it’s gone, I might consider another project at some point – maybe something like a Dexta.

It’s up on DoneDeal at the moment. I’m looking for €7,950. I’m getting calls; time will tell what happens. 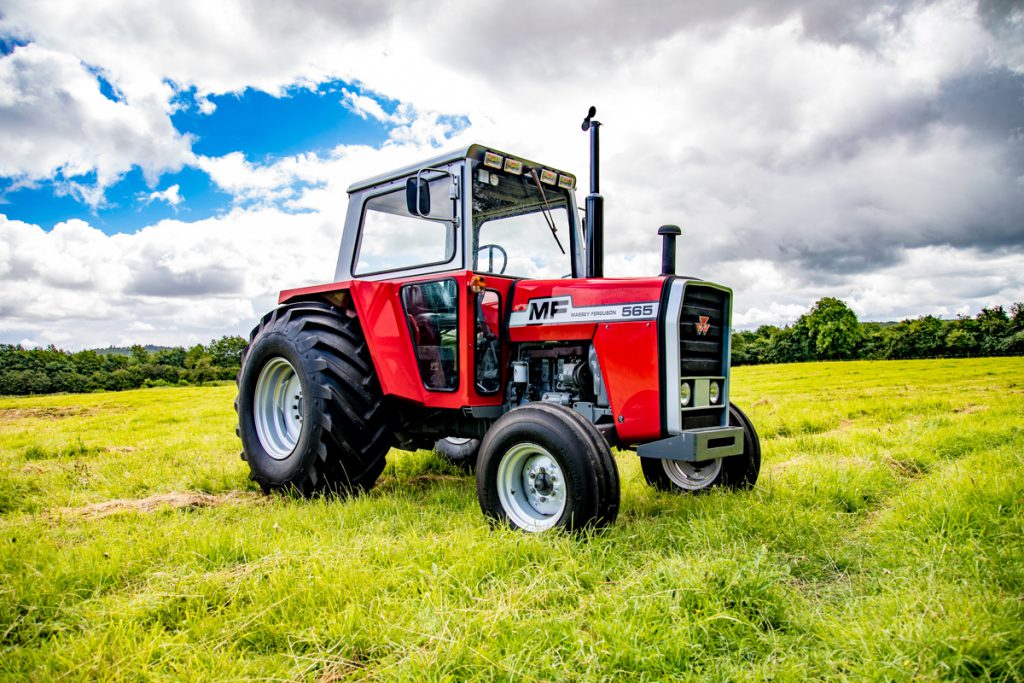 So where did Massey Ferguson’s 565 fit into its line-up and, more specifically, the 500 Series? 500 Series models first arrived on the scene in 1976. They represented a big leap forward in terms of design; the all-new cab promised a new level of creature comforts.

For example, many of the controls were integral to the cab (courtesy of remote linkages) rather than the skid unit of the actual tractor. The almost-flat floor was a first on a Massey Ferguson. 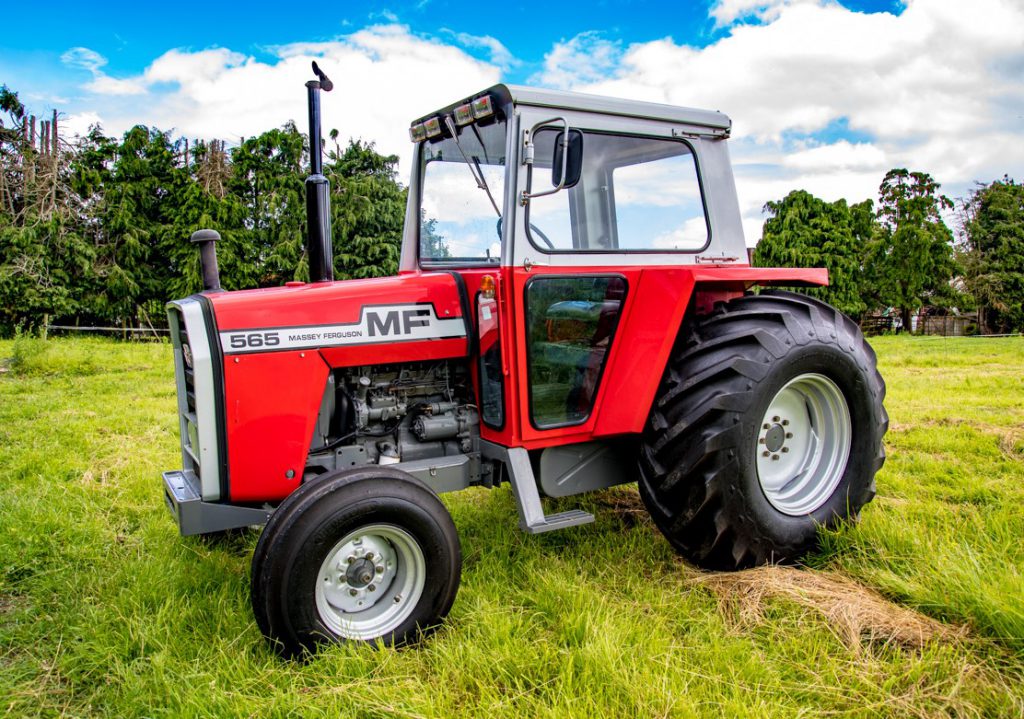 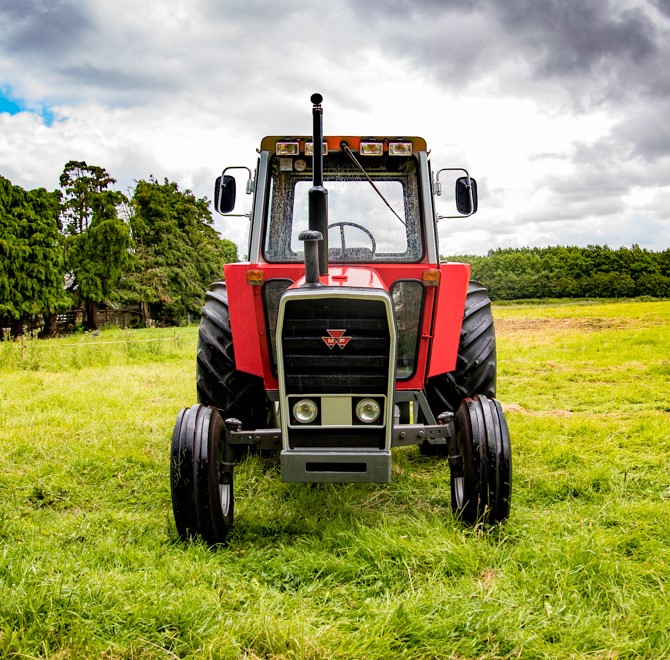 Some 500 Series models, whether built in the UK or France, did suffer from reliability issues – compared with their predecessors. Many of the cabs succumbed to rust. Also watch out for wander-prone steering.

There was also a 200 Series – introduced around 1980 to also replace the 100 Series but with a lower specification (and price tag) than 500 Series models. 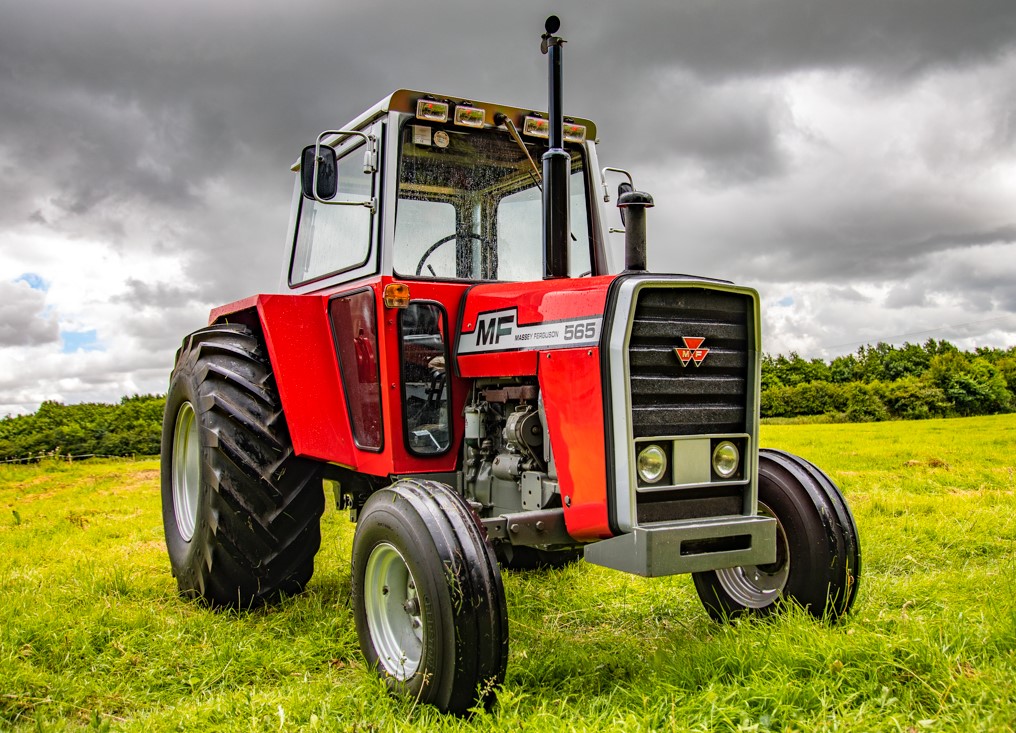 Most 500 Series tractors had distinctive one-door cabs but, from 1980 on, two-door versions were available – typically finished in red rather than grey. In fact, tractors with two-door cabs and 12-speed gearboxes (with unwieldy gear levers) are increasingly sought after.

The taller-looking 600 Series replaced the 500 Series in 1982. 200 Series models continued to be produced. Meanwhile, the ever-popular 300 Series arrived on the scene in 1986. The rest, as they say, is history. 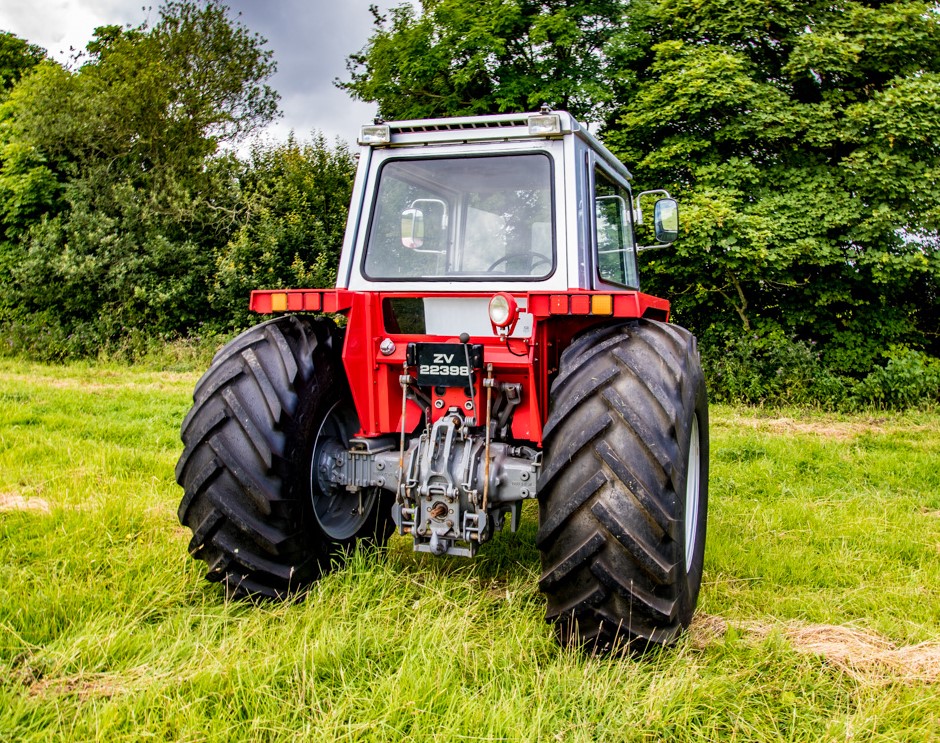