Tractor and machinery safety features heavily in the entries for this year’s BT Young Scientist Exhibition, which takes place on January 6-9.

One of the projects aims to improve tractor safety through the design and manufacture of an emergency power cut off switch for a PTO.

The concept was developed by Brian Harnett and Roman Creeden from Scoil Mhuire agus Ide, Newcastle West, Co. Limerick, with the help of their science teacher Rebecca Phillips.

“It is basically a wireless rely that works for independent Power Take Offs (PTOs) found on most new tractors,” said Harnett.

A transmitter is used and it sends a signal to the PTO from a wristband worn by the farmer, that will allow the PTO to be stopped easily in the case of an accident.

He said, the PTO stops when a button is pressed on the wristband. This breaks the circuit immediately and causes the PTO to be stopped instantly.

“The project involved a bit of research, but we felt that the device had to be wireless to work effectively. The design of the project will also make it easy, if we decide, to produce the device on a larger scale.” 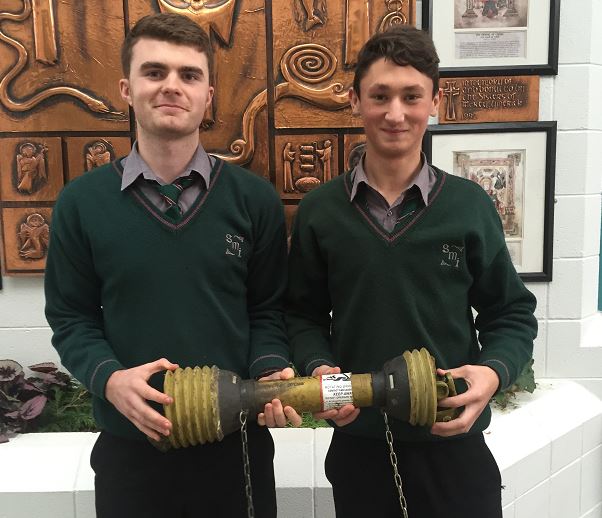 Another one of the entries to this year’s BT Young Scientist Exhibition is a safety device that can be fitted to tractors or other machinery to reduce the risk of passengers falling from the cab.

The project was designed and created by Mark Gorman, a third year student in Tullamore College in Co. Offaly, with the help of his science teacher Jillian Browne.

The device will reduce the number of injuries associated with farm machinery falls through alerting the operator that there might be a safety risk, Gorman said.

The device can be easily fitted to tractors and other machinery, he said, and it consists of a circuit that alerts the driver if the door is open and the fold down passenger seat is down.

The device consists of a buzzer that triggers when the door is not correctly fastened and the passenger seat is down.

“I am from a farming background but I also have a keen interest in engineering. I spent a lot of time developing the concept, but it only takes a few minutes to fit the device to the tractors, said Gorman.

He added that he first generated the idea for the concept given the high rate of farm of accidents on Ireland’s farms this year and he hoped that his project would make farms safer.