An agreement to progress lifting the British beef ban on exports to China is a vital first step in unlocking this major market, according to AHDB.

Access to the Chinese market could be worth up to £250 million (€281 million) in the first five years to UK farmers.

New measures to improve market access to China were announced by British Prime Minister Theresa May this week – in a move which could ultimately see beef from the UK exported to the country for the first time in over 20 years.

It is anticipated the BSE ban could be lifted within six months if a visit from Chinese inspectors this spring is successful. This would clear the way for detailed discussions and the completion of a five-step process to open the Chinese market to British beef.

The news has been welcomed by AHDB, which has been working on market access in the region for a number of years. It is also good news for exporters keen to look to new, non-EU markets.

AHDB head of exports Peter Hardwick said: “The announcement is a vital first step in unlocking this major market for beef without which we could not progress to the substantive approval process.

“This agreement comes after an intensive programme of inspections and visits by the Chinese authorities over the last two years – led by AHDB in collaboration with the government and industry organisations.”

The announcement came on the first day of the British Prime Minister’s three-day trade mission to Beijing, where she was joined by senior business leaders and industry representatives including AHDB chief executive officer Jane King.

During her visit, she held meetings with members of the Chinese government and other industry leaders where products ranging from pork to malting barley were discussed.

King raised the urgency of lifting the beef ban with both Prime Minister, Teresa May and Secretary of State for International Trade, Liam Fox. Both indicated it was a government priority.

AHDB has previously helped secure access to China for pork and for barley. 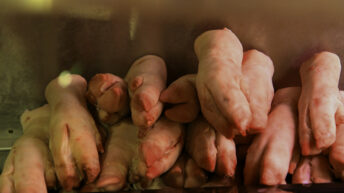 ‘Fifth-quarter’ products among pork exports off to China