Changeable weekend in store with heavy rain in places

A mild, changeable weekend is in store over the coming days, with heavy rain expected in some areas, according to Met Eireann.

There will be sunny spells this morning (Friday, September 7) over Ulster and north Leinster, but it will be generally cloudy, with patches of mist and drizzle otherwise.

Tonight will see cloudy, misty weather in all areas overnight, with persistent rain becoming widespread over the southern half of the country and heavy over parts of Munster, with a risk of spot flooding there.

Some hill and coastal fog is expected also, with lowest temperatures expected to stay at 10° to 12°.

Variable drying conditions are expected over the coming days with some opportunities given for today and Sunday.

There will also be some spraying opportunities today, but rain and drizzle in the west later will spread countrywide overnight.

Regarding field conditions, soil moisture deficits are still high in central, eastern and southern areas, with deficits of between 30mm and 55mm in places.

These values will be reduced a little this week. However, deficits are much lower over Connacht and west Ulster, with a surplus in some parts of Connacht expected over the coming seven days.

Tomorrow will see a cloudy, misty start to the day, with outbreaks of rain – some of which will be heavy in southern parts of Munster and Leinster.

A clearance will develop over Ulster and much of Connacht in the morning.

It will extend only slowly southwards, so that the rain is likely to persist over south Munster and parts of Leinster until evening. Highest temperatures will peak at 15° to 17°, Met Eireann says, with fresh south-west winds in southern coastal counties, but winds light elsewhere.

Tomorrow night will be cloudy and misty overnight, with some rain and drizzle in many places, and some fog patches on the cards also.

However, it should dry out in many places later. Southerly winds will veer westerly and freshen, with lowest temperatures of 9° to 11° expected.

A Status Yellow environmental warning for conditions conducive to potato blight was issued on Wednesday and remains in place.

Sunday will see some showery rain in Atlantic coastal counties, but mainly dry and bright elsewhere, with occasional sunny spells.

Top temperatures of 15° to 18° are given, in moderate to fresh south-west to westerly winds. It should stay dry overnight with slack breezes in most areas, though it will be misty with patches of fog in places. Lowest temperatures are forecast to drop to 6° to 9°.

Monday will see some dry, bright weather to start the day, with sunny spells, but cloudy, damp conditions are due in off the Atlantic during the second half of the day.

It will become breezy also, and rain will be heavy in places. Temperatures are expected to reach up to 16° to 19°, with winds increasing fresh and gusty south to southwesterly. 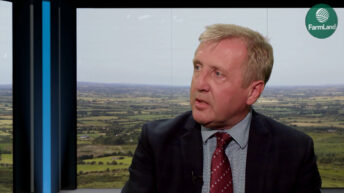 ‘No farmer can afford to be carrying inefficient cattle’ – Minister Creed