Supplies of finished cattle to beef factories are set to be very tight this week, according to the IFA’s latest beef price update.

The latest cattle supplies at export meat plants for the week ending May 16 stood at around 29,500 head which was 8% behind supplies for the same week last year.

According to Bord Bia an increase of almost 50,000 head in live cattle exports in 2013 combined with a drop of more than 100,000 head in calf registrations point to a significant tightening in fnished cattle supplies this year.

Bord Bia has said the trade was relatively steady across the UK last week with a more mixed trade reported across the continent.

It says the trade was reported as relatively steady despite some ease in demand coupled with a rise in supplies. Topsides and strips were reported to be performing best. 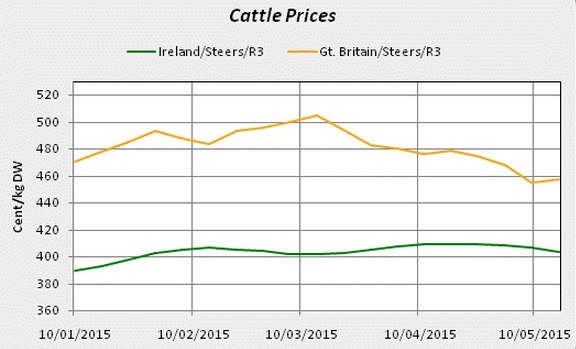 In France, Bord Bia says little change has been reported with promotions centred on chucks and diced beef. Meanwhile in Italy, little change was reported with the trade remaining slow on the back of sluggish demand due to the arrival of milder weather with strong competition also reported.