Factory buyers made their presence felt in Carnew Mart on Saturday, according to the Mart Manager David Quinn.

Quinn said that forward cattle prices increased by 10c/kg on Saturday compared to the week before, as more factory agents sought stock.

A similar story was also seen in Tullow Mart on Friday.

According to the Mart Manager Eric Driver, forward store cattle prices increased by 10c/kg on Friday, as more farmers are looking for cattle to graze.

Driver said that many grass buyers have returned to the ring to purchase stock, due to the good grass growth rates over the last couple of weeks.

He also said that finishers are little bit more confident about the direction in which the trade is heading, as factories are offering a relatively good beef price at the minute.

Heavy steers and heifers were also in demand in the west.

Michael Murphy, the Mart Manager of Balla Mart said there was a good trade all round, with prices slightly improved on last week, helped by the warm weather.

Along with strong demand for forward cattle, Quinn said there was good trade for the export type weanlings on offer in Carnew Mart on Saturday.

Quinn continued to say there was strong demand from beef finishers, with the best of the store steers and heifers selling from €3/kg and €2.70/kg respectively.

The cattle trade continues to remain good in Tullow Mart, according to the Mart Manager Eric Driver.

Driver said that the weanling trade continues to remain strong, with 400kg Charolais and Limousin heifers trading from €2.60-2.80/kg, while the muscled blue heifers sold to a top price of 3.05/kg.

However, he said that the trade is currently being driven by farmers trying to secure stock to graze, while exporters are finding it difficult to compete with these buyers around the ring.

The mart manager also said that the cow trade has improved slightly over the last couple of weeks, especially for the heavier lots which sold to a top price of €1,040 over on Friday.

The better weather resulted in some improvement in the cattle trade in Balla Mart on Saturday, according to the Mart Manager Michael Murphy.

Murphy added that there were 188 cows on offer, which was the biggest sale in a while and these lots traded from €1.41-2.92/kg. 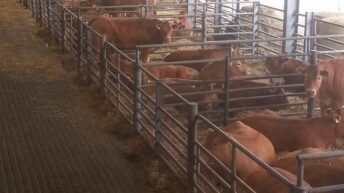 Limousin weanling heifers sell to a top price of €8,800 at dispersal sale