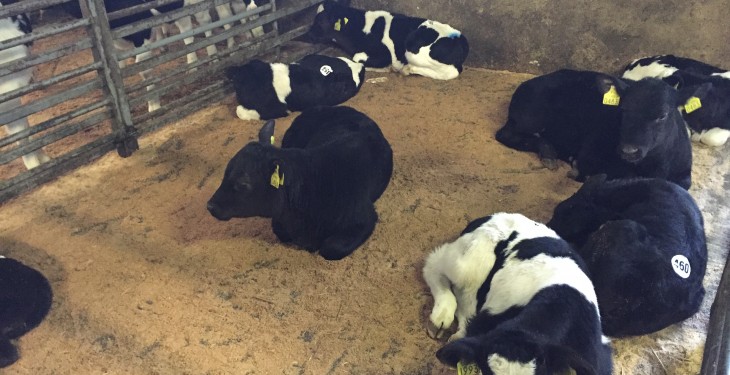 Export markets such as Holland and Spain are vital to maintain a good price for the calves produced from the Irish dairy herd, according to the Mart Manager of Macroom Mart, John O’Mahony.

O’Mahony said farmers would not receive €60-90/head for the plain Holstein Friesian bull calves if the Dutch and Spanish export markets were not available.

The Spanish market takes a considerable number of Irish calves on an annual basis. In 2014, 30,000 cattle were exported from Ireland to Spain, with 95% of these animals being calves, Bord Bia reports.

“Spain is growing its beef production and demand is expected to focus on good quality Friesian bull calves, along with beef-crosses coming from the dairy herd,” she said.

Closer to home, O’Mahony said that the number of calves on offer in Macroom Mart on Saturday had increased on the previous week, but the trade remained similar to last week’s levels.

He said that Friesian bull calves suitable for shipping traded from €60-90 each, while the better quality Friesian bulls made €160-170 each.

The mart manager said the trade for the early maturing calves continues to remain buoyant, with Hereford and Angus bulls selling from €170-355, while similar type heifers made €130-325 each.

The number of calves on offer in New Ross Mart on Saturday increased by about 200 head, according to the Manager Richard Kirwan.

Kirwan said there was a relatively strong trade for the 600 calves on offer, with the better quality Friesian bull calves trading from €150-250 each.

However, despite the good demand for the strong Friesian lots, the plainer type Friesian bull calves were a little easier in the market, he said.

Kirwan said these lots generally sold from €50-80 each, as the export trade has yet to get into full swing in the Co. Wexford venue.

He also said that continental, Hereford and Angus calves remain in good demand from farmers.

Tullow Mart held its first calf sale of the year on Friday last and according to the Mart Manager, Eric Driver, there was good enthusiasm from customers.

Despite it being the first sale, Friesian bull calves suitable for shipping sold well. The hammer fell on these lots from €80-115 each.

The better quality Friesian bull calf sold to a tops of €205, while the Hereford and Angus bulls peaked at €305 each.