Good demand for calves, but extra numbers set to dampen the trade

Calves remain in good demand in many marts on the back of both farmer and exporter demand.

However, the expected increase in calf numbers in the next few weeks, as calving gets into full swing on dairy farms is likely to dampen the trade, according to Tom McCarthy of Skibbereen Mart.

The Mart Manager also said that calf export markets are key in removing the plainer dairy type calves from the Irish beef industry.

McCarthy said that there is good demand in both Holland and Spain for Irish dairy bull calves and farmers should make the most of this market.

“Exporting the plainer dairy bull calves out of the country will reduce the problem of extra beef cattle in Ireland two-to-three years time,” he said. 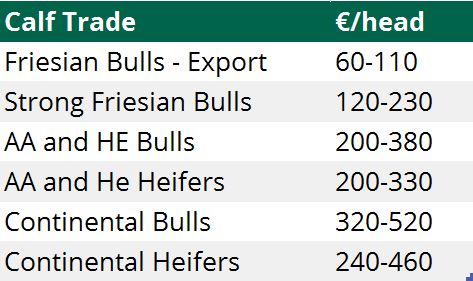 However, he said the only way that this will happen is through the farmer feeding the calf properly prior to sale as “short-term pain could be worth more in the long-term.”

Meanwhile, at a farm walk last week, Teagasc’s Pearse Kelly said that farmers should be careful about how much they pay for calves, as this will have a big impact on the profitability at finishing.

Calf trade round up

The number of calves on offer in Macroom Mart are increasing week-on-week, according to the Mart Manager John O’Mahony.

Dairy bull calves suitable for shipping sold from €70-90 each on Saturday, he said, while the better quality Friesian bulls traded from €140-150/head.

O’Mahony said there were plenty of farmers and calf exporters present around the ring, but he expects calf prices to drop in the coming weeks, as calving gets into full swing.

The Mart Manager also said that farmers are buying most of the Hereford and Angus bull calves on offer with the hammer falling on these lots from €330-380/head.

However, he said that some farmers are finding it hard to tell the difference between Jersey and Angus bull calves, which is having a negative impact on the trade for the plainer Angus calves.

There were 400 calves on offer in New Ross Mart on Saturday, according to the Mart Manager Richard Kirwan.

He said there was strong farmer demand for continental calves, as bulls made from €320-520, while similar type heifer calves traded at €280-480 each.

He also said that there was a good trade for Hereford and Angus calves, with the hammer falling on the heifers from €200-460 and the bulls from €300-500/head.

However, he said the prices being paid for dairy bull calves could come under pressure in the next few weeks, due to the additional calf numbers expected on the ground.

Friesian bulls under two-weeks old, which were suitable for shipping made €60-90/head, he said.

Kirwan also said that the stronger Friesian types sold from €130-230 each, with farmers being the main buyers of these calves.

There were 150 calves on offer in Skibbereen on Friday, according to its Manager, Tom McCarthy.

McCarthy said there was good demand from both calf exporters and farmers, as the number of calves on offer have yet to hit peak numbers.

He said that the shipper type dairy bull calf sold from €70-110, while the better quality Friesian bull calves made €120-160/head.

He also said there were very few beef cross calves on offer, but the small number of Hereford and Angus calves traded from €200-320 each.