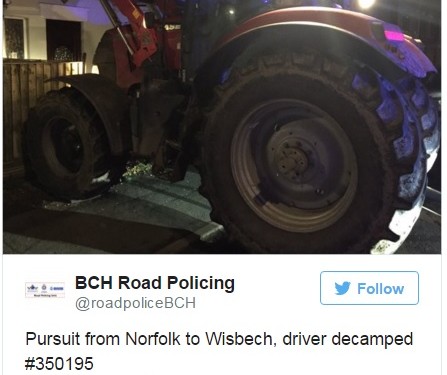 Six police cars and a helicopter from the National Police Air Service in the UK were involved in a 10m/h (16km/h) tractor chase in the UK last month.

Today the tractor driver, Nathan Lovell, was sentenced to eight months in prison and disqualified from driving for over two years.

Lovell, from Wisbech in Cambridgeshire, admitted aggravated vehicle-taking, dangerous driving, failing to stop and use of a motor vehicle without third-party insurance, according to the Eastern Daily Press.

The 25-year-old took the tractor from a farm on the evening of Saturday, January 16 and led six police cars and a helicopter on a 16km/h chase through the area.

It is reported that Lovell caused £300 worth of damage to gates at the farm where he took the tractor from and also caused £200 damage to crops as he drove through a field on the farm on his way out.

Lovell also caused one of the following police cars to swerve out of danger after he lowered the bucket from the tractor.

He was apprehended by police after he jumped from the moving tractor, which came to a stop at a kerb, and was arrested.

It is reported that Lovell claimed he had stolen the tractor as he wanted to get arrested.