A Case IH Maxxum 145 Multicontroller, equipped with the company’s new 24-speed ActiveDrive 8 transmission, has reportedly achieved the lowest specific fuel consumption ever recorded for a four-cylinder tractor in the PowerMix test – conducted by Deutsche Landwirtschafts-Gesellschaft (DLG), the German Agricultural Society.

Named ‘Machine Of The Year 2018’ at Agritechnica, the new model achieved an average specific fuel consumption of 258g/kWh in the ‘Field Work’ section of the test – apparently almost 9.5% lower than the 282g/kWh recorded by its nearest competitor.

The test was carried out at the DLG’s test center near Frankfurt using the so-called ‘PowerMix Roller’ stand. The facility has been described as the “world’s most efficient for measuring the complete tractor system”, supposedly because engineers can replicate “real field-work conditions”.

On the basis of typical tractor workloads, DLG has defined 14 load cycles, under which the overall vehicle’s fuel and AdBlue consumption, performance and energy efficiency are determined. According to the body, the cycles reflect typical field and transport work under partial and full loads. 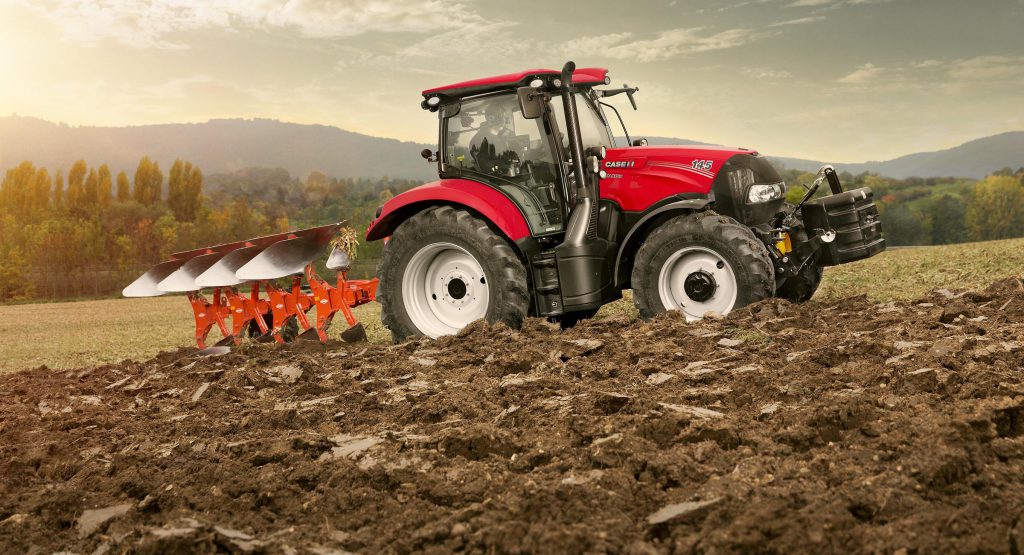 Tests cover pure pulling work, for example with a plough or cultivator, as well as mixed work with the PTO and hydraulic system with, say, a muck spreader or baler. Heavy and light transport tasks are also reproduced to obtain an overall picture of the tractor’s energy efficiency in use.

The results are then summarised in the aforementioned PowerMix figure, providing an assessment of the fuel efficiency of different makes and models of tractor – under practical conditions.

Inside the cab of a Case IH Maxxum 145 Multicontroller

In the DLG PowerMix test, the Maxxum reportedly recorded an average ‘Field Work’ fuel consumption figure of 258g/kWh, with specific consumption ranging from 230g/kWh when operating a rotary harrow (at 100% load) to 302g/kWh with a baler in tow.