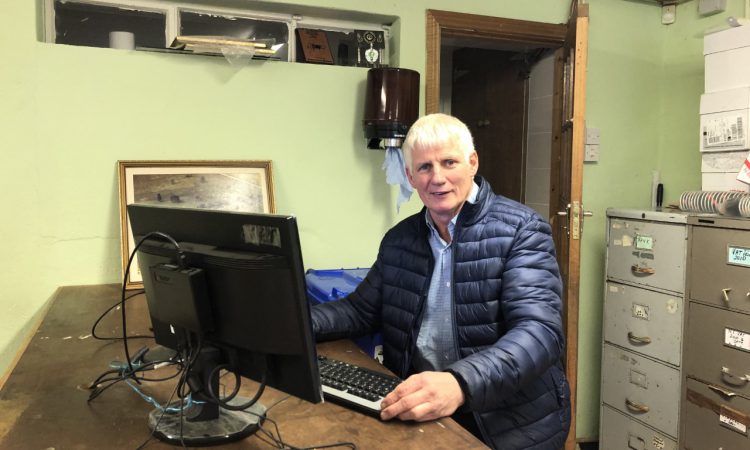 On Saturday last in Elphin Mart, Gerry Connellan sat down with AgriLand in the mart’s canteen and had a chat about his time in charge of the Roscommon-based livestock mart.

Gerry, over the coming weeks (no date has been set), is set to retire after 26 years of being the mart’s manager.

A number of reasons have led to his decision to step away, such as getting his “aching knee” looked after and also wanting to spend more time with his family.

He also said that the timing feels right and that he wants to go out on a high after coming through what he described as the toughest year he has had in the job.

On the day, Gerry looked back over his time at the mart and talked about the highs and lows of the job and all the great colleagues he worked alongside, as well as all the great friendships that he made over that time. 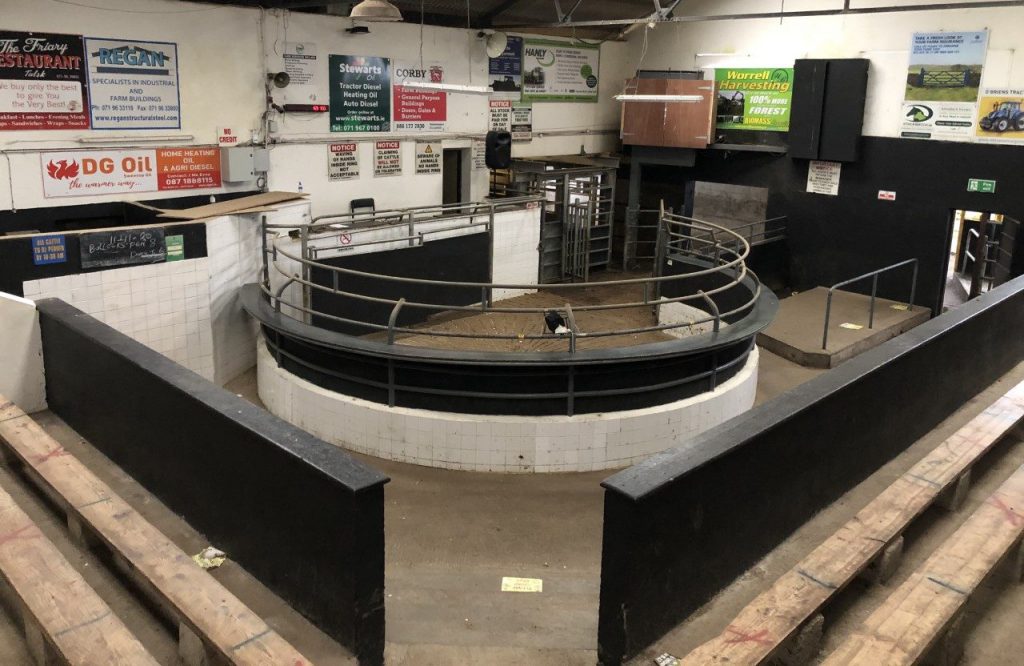 ‘Taking over at a financially troubling time’

Having spent his early working years on UCD Lyons Farm in Co. Kildare and at Carton Estate, the opportunity to take over at Elphin Mart became available, and Gerry seized the opportunity as it meant he could move back home once again.

However, at the time, the mart was struggling financially and Gerry said that it was very testing early on with long days, which included early mornings and late nights spent in the office to get the ball back rolling again.

Gerry explained: “It wasn’t easy here for a long time when I first arrived. I have to say, I have a great wife [Mary] that stood behind me when the going was tough and when the hours were long. I’d like to thank her first of all. I wouldn’t have lasted as long here only for her.

“The mart wasn’t in that great of a position [financially] when I arrived. Slowly but surely, since I came in, we have made money every year.

“Back then, the chairman at the time was Cyril McDermott. I’d like to thank him for all his help at the start. I wish him well, as I know he’s in hospital at the moment and I hope he’ll be at home for Christmas.

Going back to the mart, we changed sales and went back to evening sales and that helped. I made some great friends from up in Derry down as far as Cork who came to the mart to buy and sell cattle.

“I met a lot of people where I worked in Kildare and from other parts of the country and once I came to Elphin some of them came down here to buy and sell cattle – and bit by bit we grew our customer network.” 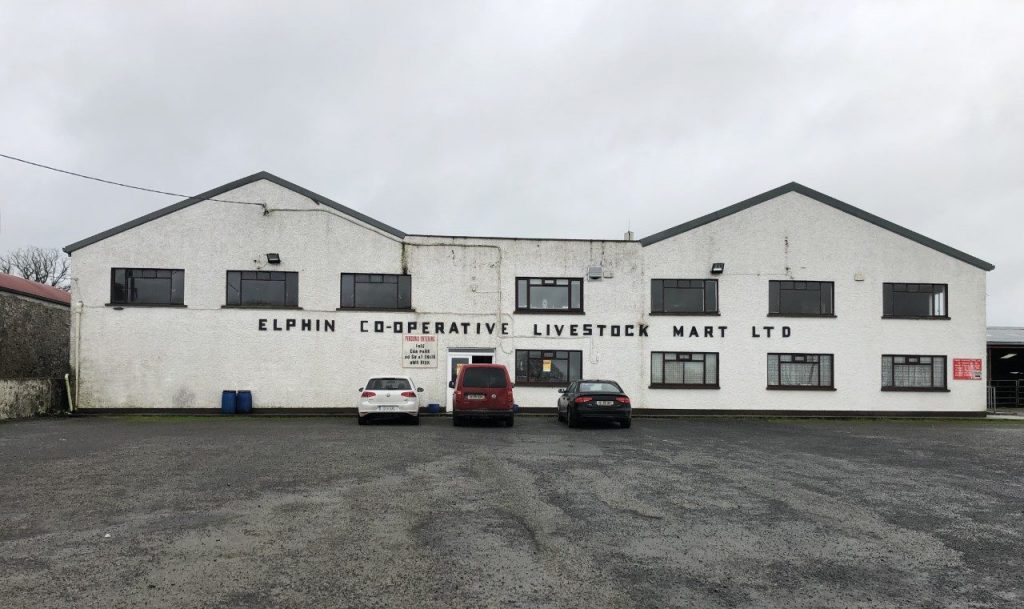 ‘I met my best friend at Elphin Mart’

Gerry said that the mart had a very strong number of people coming from the North when the money was good value to them.

He said: “You could say we nearly had a bus load of Northern people coming to the mart when we had big sales on.

“I found the Northern people to be very honest and straight and very good people to work with. We worked very hard for them too. We looked after their cattle, which had to be tested down here.

“To this day, a large number of our customers are Northern people and they have been a huge part of the mart’s development over the years.

The closest person to me would be my brother Micheal, but my best friend was Edwin Lyons, from Monaghan Road, Co. Armagh – who was also a great customer of the mart.

“One evening in the month of February, I was out looking at sheep at home when I got a phone call to say that Edwin had passed away from a heart attack. It was the biggest shock I ever got in my life.

“I left the field and came into Oliver Burn’s – a small pub – down the town. Edwin never left Elphin without going for a drink and I went and drank two small whiskies in his honour. To this day, his brothers and sons still come to Elphin Mart.” 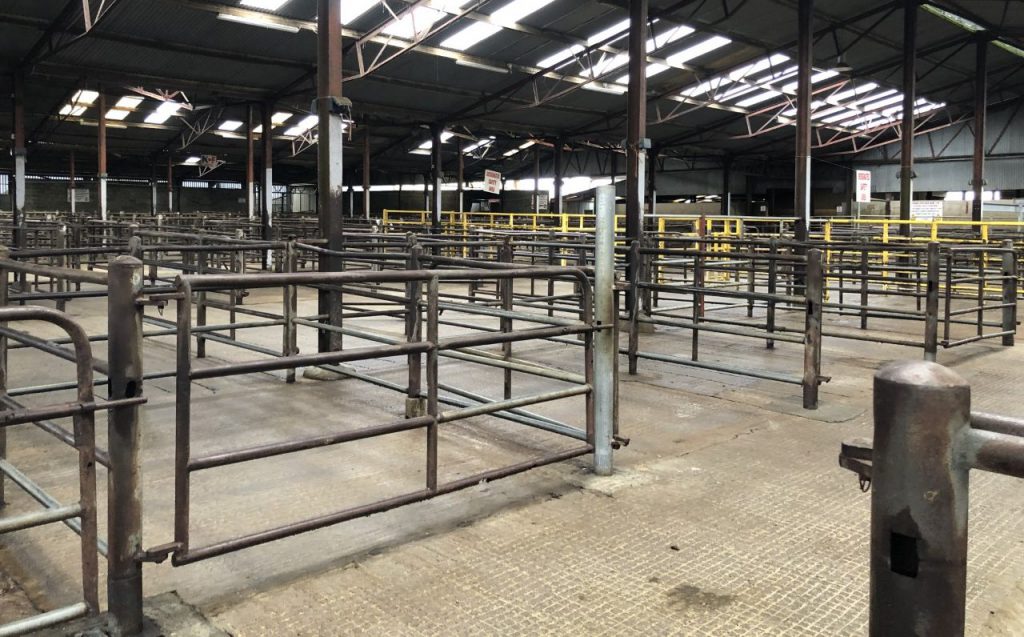 Gerry said that this year has been a very tough year for everyone and that it was the toughest year in the job since he started.

He explained: “I’m 26 years here; I’ve given all of my time to it. I gave it 100% to try and improve it and build it up. I’m going out at a time when the mart is going very well but I have to say, this year has been the toughest yet.

We’ve had some great sales towards the back end of this year and last week we had a record of €9,000 for a springing heifer, so it a nice time to go.

“It’s been the most difficult year I’ve had here since I came here and if you were to ask any other mart manager they would probably tell you the same.

“It was really tough from once the lockdown came last spring. We went out to the country and got an awful lot of cattle sold for farmers when they had no mart to go to. I spent seven days a week for most of the whole day, along with the chairman and secretary of the mart to try and keep buyers and sellers happy.

I would say we gained a lot out of it as the year went on, a lot of people came back to the mart. People that we never had dealt with before Covid-19, came back here and sold cattle through the ring.

“We used to make arrangements for the buyers and sellers. The cattle would be brought in here to weigh and the buyer and seller would thrash out some price and try to come to an agreement.

“I’d say we fixed up 90% of the people as best we could. I was very reluctant to see people giving too much money for cattle last spring because I felt this back end was going to be very dangerous, but how very wrong I was. It was a great back end for farmers selling cattle. It was a lot better than what people expected. 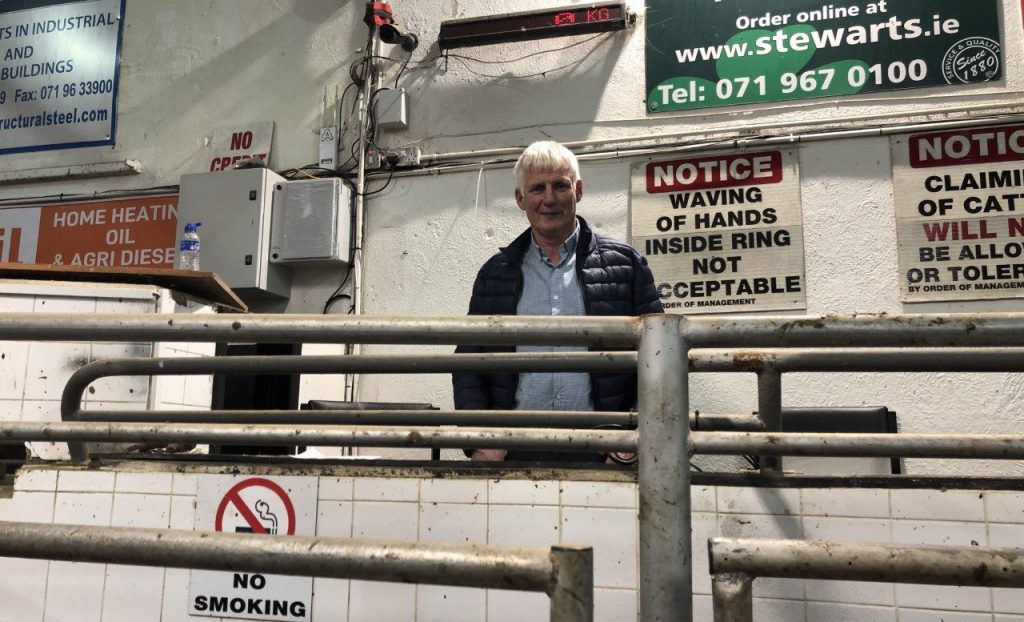 “Online came in and we got set up. We were wary of it for a long time and we were a bit afraid of it. However, as I see it now, I think it has been a big help, especially when the marts have been closed.

Online is here to stay along with people around the ring. It will be a big help for young people at home who can buy a few cattle at an evening sale for example.

“The only regret I’d have is that we should have brought in extra staff earlier in the year. We have more staff now but it was a day and night job here at the start of lockdown and really we didn’t have enough people and we were a bit overwhelmed with it all.

“There’s been savage pressure on the marts this year and Elphin Mart is hugely important to the area. We have three great marts in Roscommon. We work great together [Brendan Egan in Castlerea, Maura Quigley in Roscommon and myself here in Elphin] and we helped each other out throughout the year more than ever before.”

Looking back on the sheep and beef trade over the years

Gerry said that sheep farmers, over the last few years, have had more to smile about than their beef counterparts.

He went on to explain: “The sheep trade has been steady here over the last number of years. There’s probably been more money made out of sheep than there has out of beef.

“A lot of store lambs have been bought and they have gone on to leave money in farmers’ pockets. At the end of the day, that’s what it’s all about.

“The beef farmers went through a bad spell this time last year. Farmers took awful prices for cattle. We were above outside Athleague last summer to try and see could we get more for our cattle.

At the moment, unless beef is up at €4.00/kg with all the costs compared to years ago, it’s not sustainable.

“Farmers rely, nowadays, on what comes in the post [basic payment] but they would much prefer if they were getting a better price for their cattle because there are so many rules and regulations coming in the post nowadays.

“You could be unlucky and do something wrong – for a certain scheme – and lose out whereas if you were a getting a better price for your cattle and less money coming in the post I would see it as being better for farmers that way.

Last year was probably the toughest year I’ve seen beef farmers go through. I saw people buying cattle in the back end, you know really good store cattle, that fed them and put them into heavy weights and took down to €3.00/kg for them.

“Those same people said to me that they would be coming back this September and looking to buy them same store cattle at €2.00/kg but you couldn’t get them at that price this year.

“You can’t sustain anything if you’re not making a profit. It’s going to take a hit somewhere down the road.”

‘A big thanks to everyone’

Looking back at all the people that have worked in the mart down through the years, Gerry was very thankful for all the help that he got.

He added: “The staff I have worked with down through the years have been absolutely fantastic.

An ‘old pal’ of mine, Mary Theresa Murray, has been here probably 40 years, I’m not sure exactly, but she has been the ‘mother of the mart’ as I see it.

“She told me she’s pulling out with me at Christmas as well. I have worked with great people in the office such as Kathleen, Ann, Peggy, and Carmelita.

“I’ve had mighty lads working with me in the yard. We have always worked together well as a team and built up the mart to where it is today as one of the best if not the best in the country.

“I’d also finally like to thank the chairman of the mart Pat Dockery and to the Department of Agriculture who have been very accommodating and great to work with on any issue and especially with the testing of cattle from the North here at the mart,” Gerry concluded. 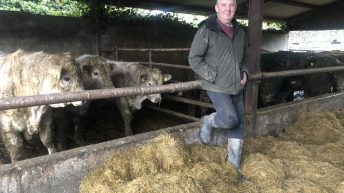