Buildings Focus: Swapping a 10-unit parlour for a robot in Co. Kilkenny 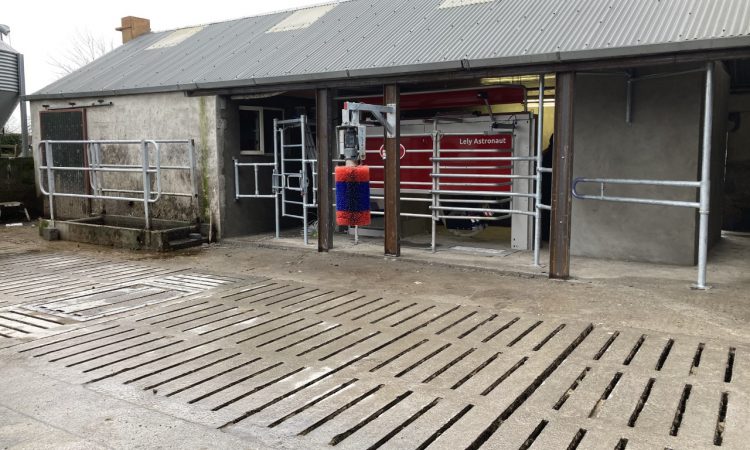 The first Buildings Focus of 2020 saw AgriLand pay a visit to a tidy conversion job in Co. Kilkenny, where a 10-unit parlour was replaced with a robotic-milking machine.

The farmer, John Murphy, from Callan, has been milking cows for over 30 years. He started off milking his cows through a 5-unit parlour and gradually, over time, expanded it to a 10-unit.

As of now, John is milking a herd of 70 cows with calving about to take flight over the next week or so.

Having only decided to pull out his 10-unit herringbone parlour in November and with construction only beginning last month, John was in a race against time to get the robot operational in time for calving.

When John was asked why he decided to swap out his parlour for a robot, his answer was short. He simply said he was tired of the task of having to milk cows.

He explained: “I’ve been milking cows here for the last 30 years and I just felt it was time to take a step back.

“It can become a tiresome task milking cows twice a day for the majority of the year and, to be honest, I liked the idea of a robotic-milking machine and I have neighbours who have decided to go down the robot route as well and that gave me the confidence to change over.

I first came across robotic-milking machines four years ago at the ploughing championships and ever since I have been thinking about installing one.

“The day I was at the ploughing I walked into the Lely stand and at the time they were demonstrating how the robot worked and it got me thinking that maybe this was the way forward for me and my farm.

“When you are in a pit morning and evening for the best part of the year for 30 years it can become a bit tedious [milking cows] and I just felt it was time to change.” 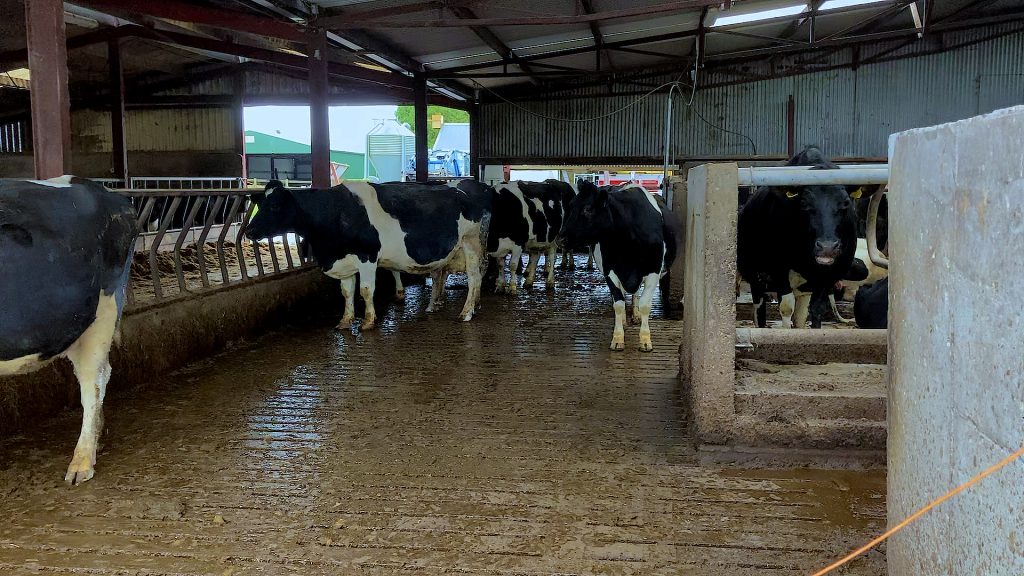 Keeping costs to a minimum

Despite wanting to change from a traditional herringbone parlour to a robotic-milking machine, John wanted to keep the building costs of the project to an absolute minimum.

So after approaching Lely Center Mullingar in November, John decided to purchase a Lely Astronaut A5. In order to keep costs to a minimum, the decision was taken to install the robot in the existing parlour.

Work only got going at the start of December, when William Conlon, a yard design and project manager with Lely Mullingar, came on-site to develop a plan for John that would see the robot fitted by mid-January – just in time before calving.

Once a plan was drawn up, work began in the first week of December. The Lely project co-ordinator, Mark O’Farrell, then took on the project and developed the detailed builder specification drawings for the project.

He was then responsible for liaising with the builders/plumbers/electricians/tank supplier and so on throughout the build. As it was such a tight turnaround, there was an awful lot of contact between Mark and the tradespeople throughout the process.

Furthermore, with the help of some friends, John was able to get through a lot of work around the Christmas period, such as knocking parts of pre-cast walls around the cubicle house to help with cow flow from the robot out towards the grazing block and to fill in the pit along with knocking one side of parlour in order to accommodate the robot.

The new design entails a Lely Astronaut A5, a treatment room and an office/compressor room.

William said that it was probably one of the tightest turnarounds for a project that they have done.

He said: “We would usually look at a robot install as a 10-12 month process, while for some farmers it could be a 24-month process, depending on the level of building/reseeding/roadways required.

However, in John’s case it was a six-week turnaround, so everything had to go right.

“The big challenge with a quick turnaround on any job is mainly to do with the farmer and the availability of a builder – Covid-19 pushed back an awful lot of building work but thankfully we were able to get this job completed in time.”

In order for John, let’s say, to dry off his cows towards the end of lactation, the decision was made to not cover the entire pit of the old parlour.

Instead, the front of the pit, where the first two cows would have stood at milking time was left as was.

So when the time comes that John wants to dry off a cow, he can divert her out from the robot into the treatment area where he will be able to work in comfort.

Speaking about the decision to not fill the entire pit completely, John said: “When we were doing up the plans, we said it would be best to leave some of the old parlour intact.

“The reason for that was to make it easier for me to treat cows, let’s say at drying off. If we had decided to fill the entire pit with concrete, I would have ended up having to tube the cows in the crush and you can imagine how awkward of a job that would be.

“The way the robot is laid out, it works out nicely. When a cow is finished milking, I have the option of either diverting her down towards the treatment area or through the footbath or back out the yard where she can make her way out to grass again.”

Starting small before going all out

Nestled in the corner of John’s cubicle shed is a Lely discovery which he purchased before he made the decision to install the robot.

John said he was having a lot of bother with automatic scrapers that he installed and that they had “his heart broke”.

Therefore, he made the decision to buy a Lely discovery and he hasn’t looked back since.

He said: “I was having an awful time with the automatic scrapers I had in the cubicle shed. There was always some problem with them and it came to a stage where I had enough.

“I decided to buy a Lely Discovery and I’m very happy with it. It works away the best and if the robot works half as well as that does then I’ll be very happy.” 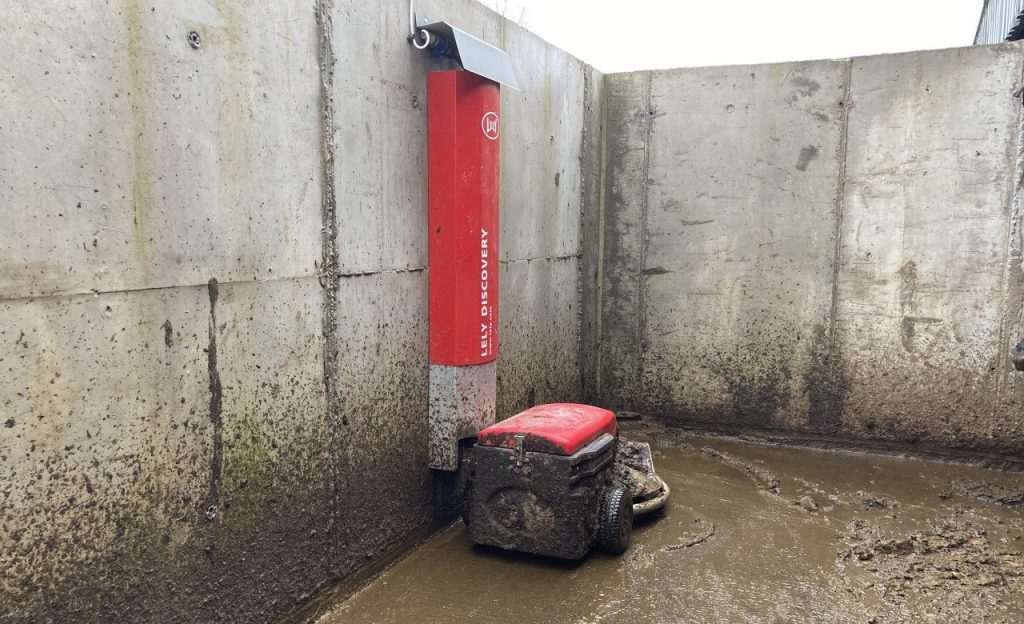 The overall cost of the project amounted to €175,000 (including VAT). The robot cost €150,000. John was also able to avail of the Targeted Agricultural Modernisation Scheme (TAMS II) which worked out at €30,000.

Speaking about his decision to install the robot, John said: “I’m happy I went ahead and decided to install it. For the number of cows I have, I think it will suit me very well.

Last year, the herd averaged around 5,500L and I hope to push this up to 6,000L next year and I’m not planning on increasing numbers so this should mean that the robot won’t be overworked.

“As well as that, it should offer me much more flexibility in comparison to what I was doing in the past. The days of checking the watch to see what time it is to bring in the cows to milk will be over and I’m looking forward to that.” 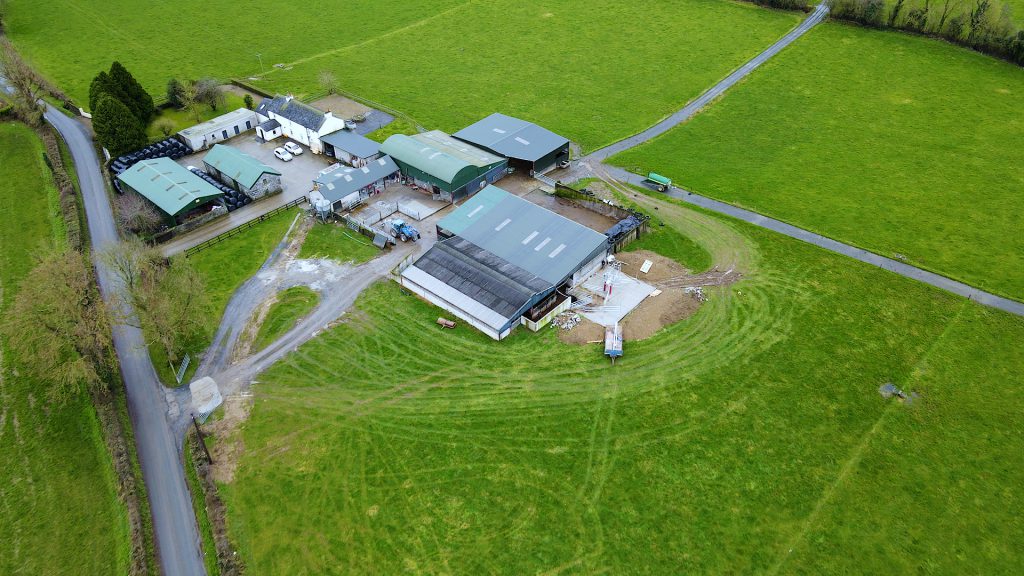 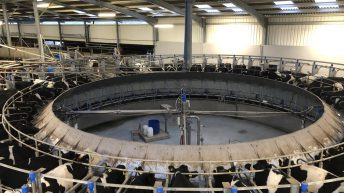