The first buildings focus of 2020 saw AgriLand pay a visit to a new cubicle and calving shed in Crookstown, Co. Kildare.

The new housing unit on the farm of PJ McGrath and his wife Kelly – who are in partnership together – was only completed at the start of December, 2019 – just in time for winter housing.

The duo both work full-time off-farm. However, the plan is to go down the route of milking cows in the future once the shed is paid off.

The housing unit is located on an outblock of land owned by the McGrath family, which has been used for growing crops over the last few years.

On the home farm, PJ’s father and two brothers run a herd of 230 dairy cows and also a tillage and beef operation.

Up until now, PJ was renting three different farms which had accommodation to hold his suckler cows. However, he felt it was time to set up his own housing facilities and build for the future.

With this new shed, the duo have the ability to operate a suckler farm with ease. Moreover, if they wanted, they could build a parlour beside the existing shed while having the facilities to house up to 80 head of dairy cows.

Farming over 80ac of good-quality grassland, the duo run a herd of 60 suckler cows. Currently, there are 40 pedigree Aubrac and Limousin cows and a further 20 head of commercial cows, along with 29 calves.

The farm operates both a spring and autumn calving system, with the pedigree bulls sold at 16 months-of-age to beef and dairy farms across the country.

Speaking to AgriLand, PJ said: “I have been breeding pedigree cattle for the last few years. My father bought a pedigree Aubrac bull a few years ago, and not long after that I bought a few pedigree cows and I haven’t looked back since.

“There is a good demand for the Aubrac bulls – especially on dairy farms.” 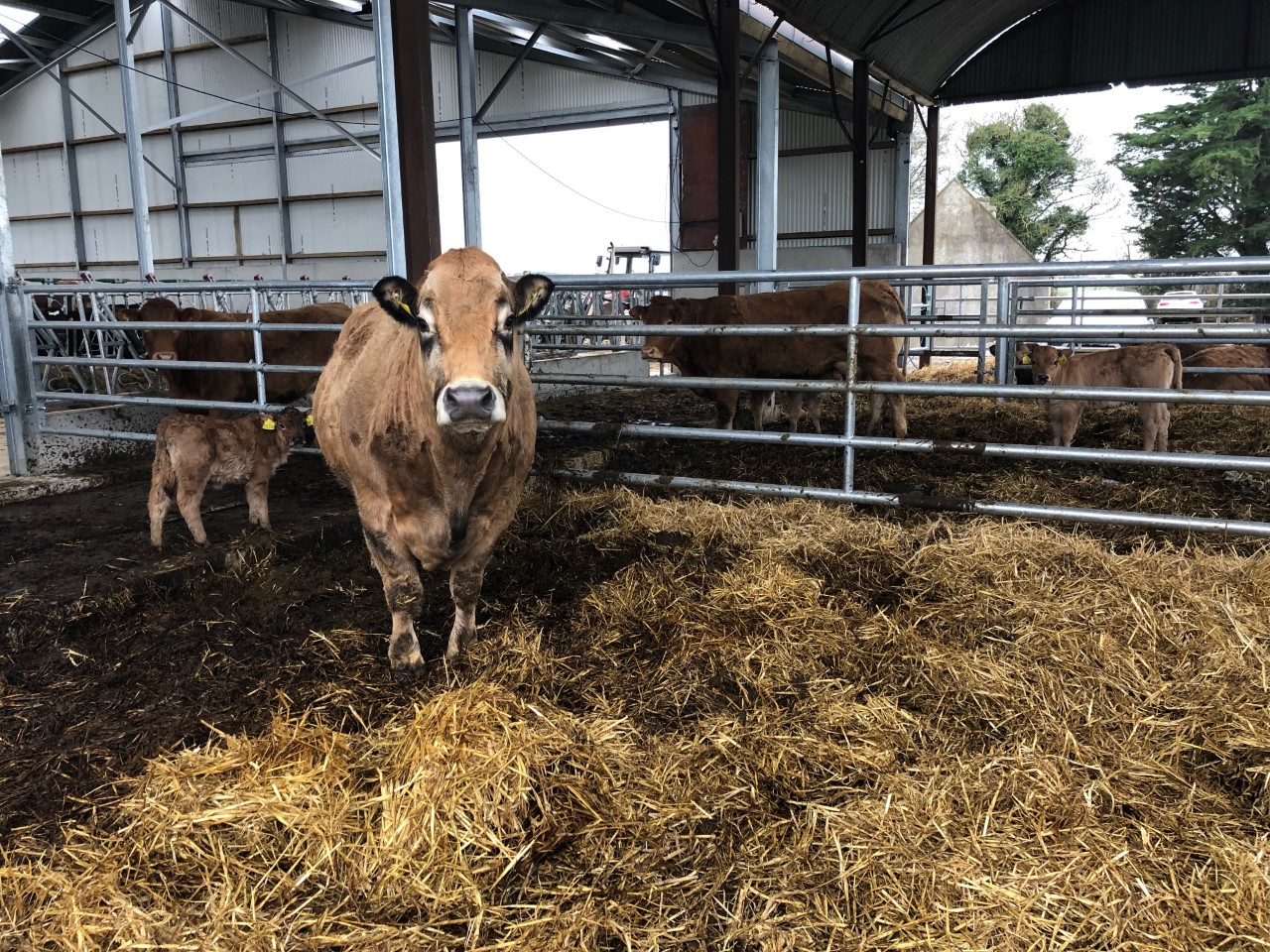 The shed was built on an existing farmyard that contained a number of old outhouses that PJ knocked – except for the old hayshed.

The multi-purpose shed was designed by Aidan Kelly – of Agri Design and Planning Services (ADPS). The shed was erected by Fox Brothers Engineering Ltd.

The building is 33.6m long including the outer feed passageway. The unit stands 9.2m high at the apex and 3.9m to the eve gutters.

The concrete walls of the shed stand 2.4m high. The slatted tank is 35.4m long and 9.6m wide. There are two agitation points at one end of the shed.

The cubicle shed is six bays long, comprising four 4.8m spans. The other two bays – which are above the slatted tank – are 6.1m long. A roof overhang is incorporated into the design just over the outer feed passageway.

There are 64 cubicles incorporated into the build, with a further 20 set to be installed in the future. 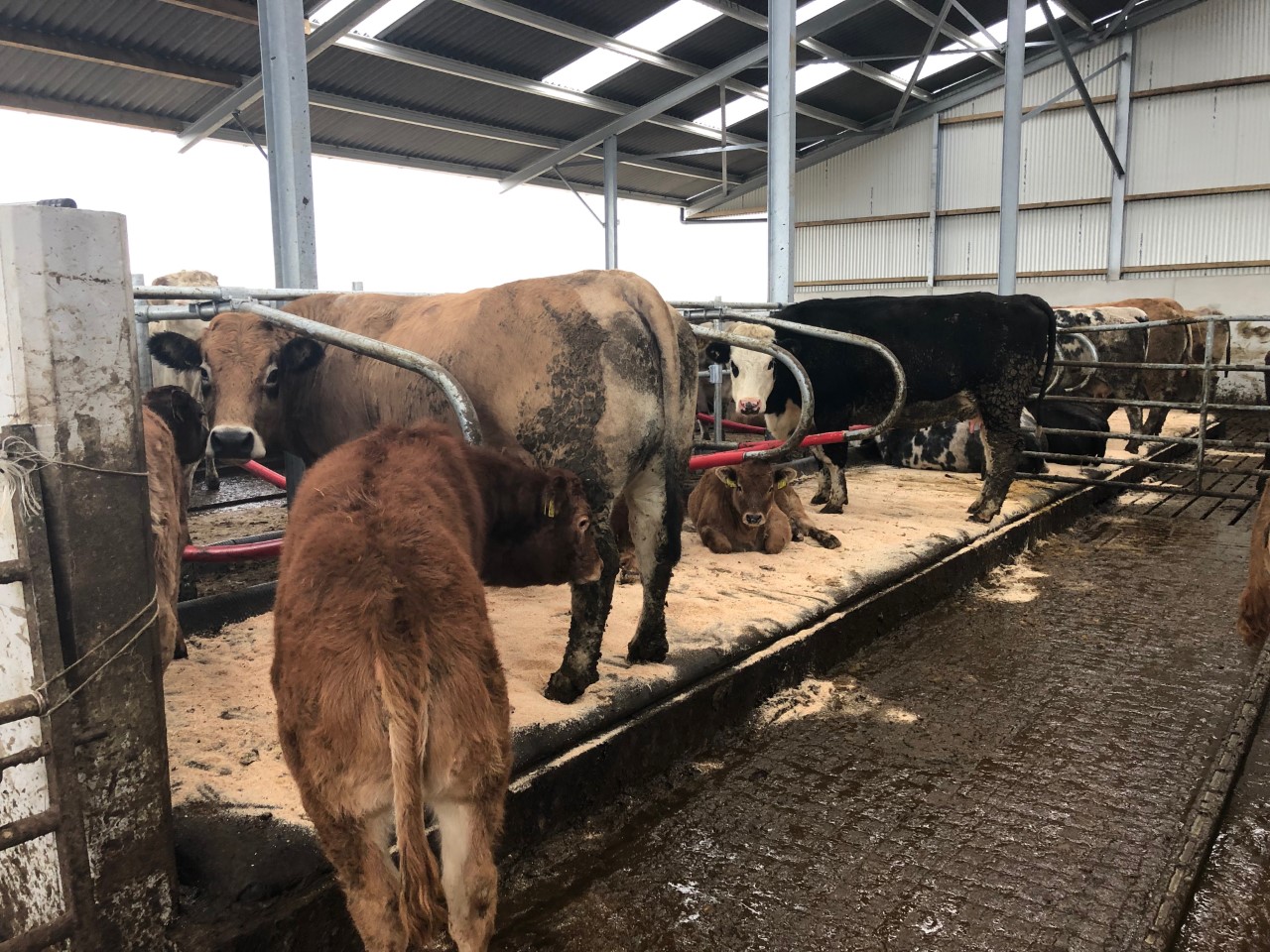 There are many features included in the design that are a common sight in many cubicle sheds across the country.

PJ spoke with Keadeen Dairy Services, who advised him on what scrapers and slurry system would best suit his housing facility.

There are four automatic scrapers; three of which are installed in the passageways where the cubicles are, while the fourth one is located in the calving area. The scrapers were sourced from Dairypower Equipment.

Also included in the unit are head-lock barriers, which PJ says “have been a great addition”.

“I had it in my head to build a crush beside the shed, but after talking to Aidan, he said I was better off installing head-lock barriers.

“I am glad I took his advice. Last week, I was clipping the cows’ tails and by simply throwing a small bit of silage in front of them I had them all locked in within a few minutes without any hassle.

“This, in turn, made it a stress-free job for both myself and the cows. It was the same when the AI technician came out to AI some of the cows. I couldn’t get over how quiet the cows were and how quickly we were able to carry out the job.” 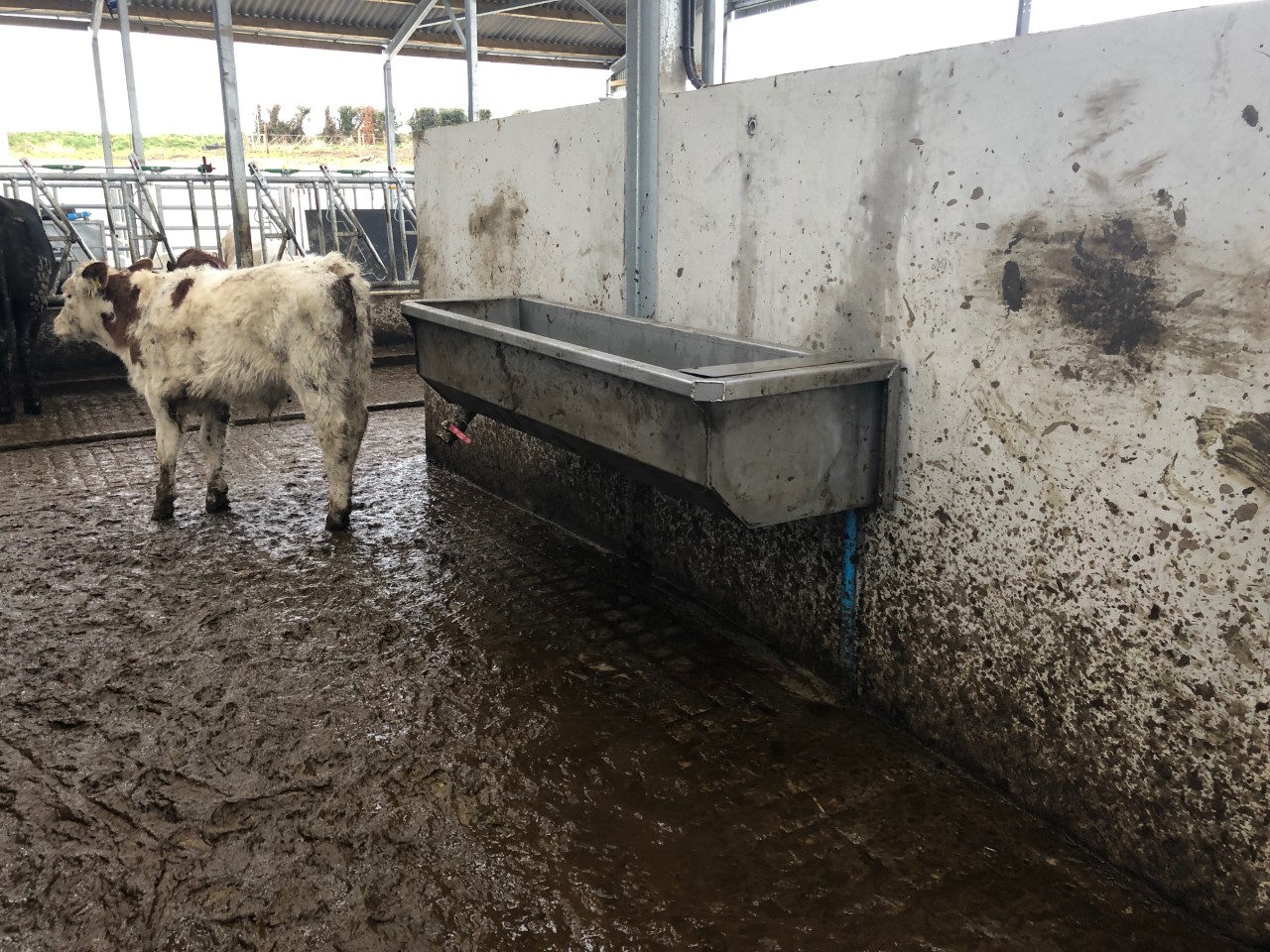 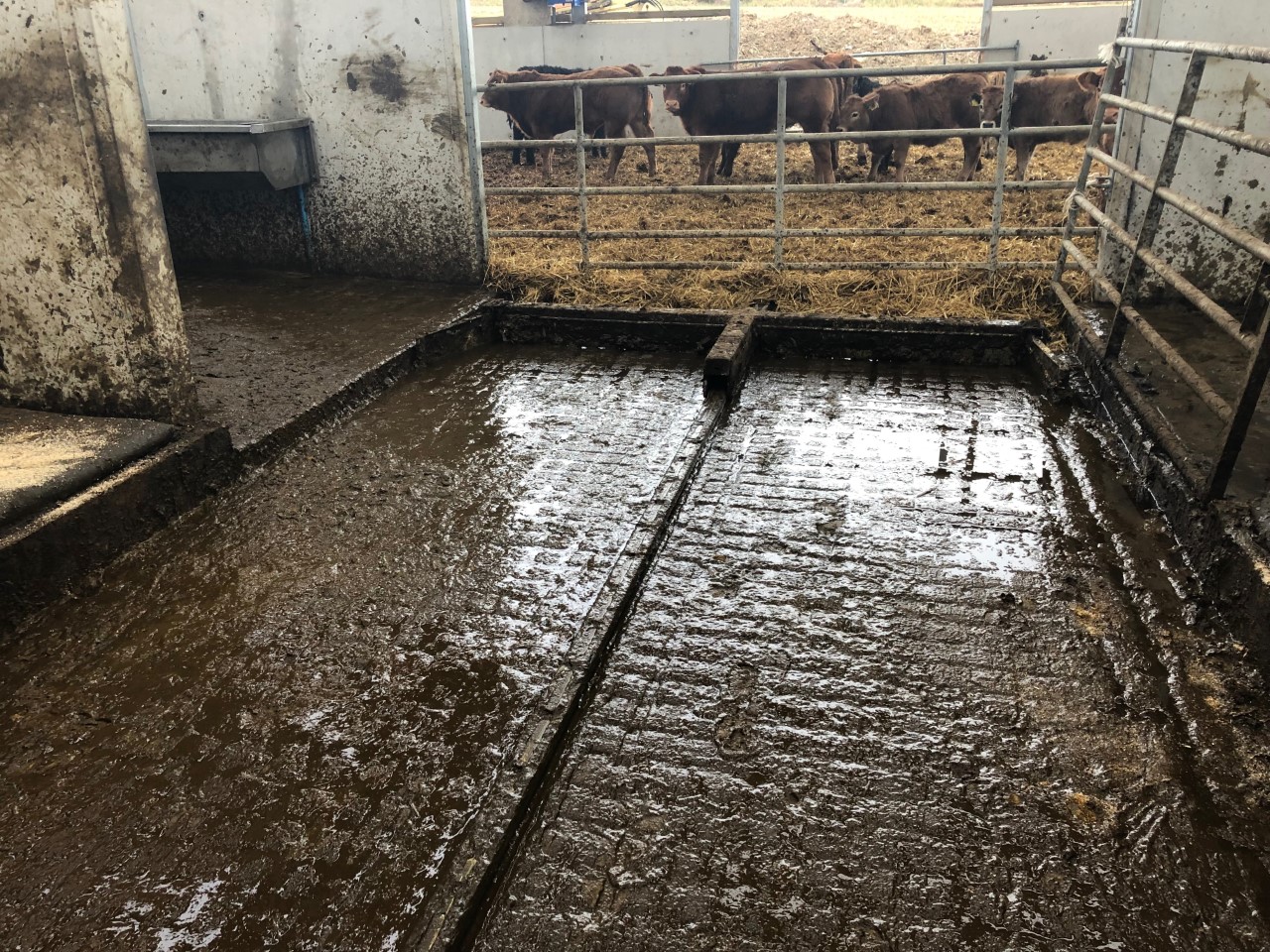 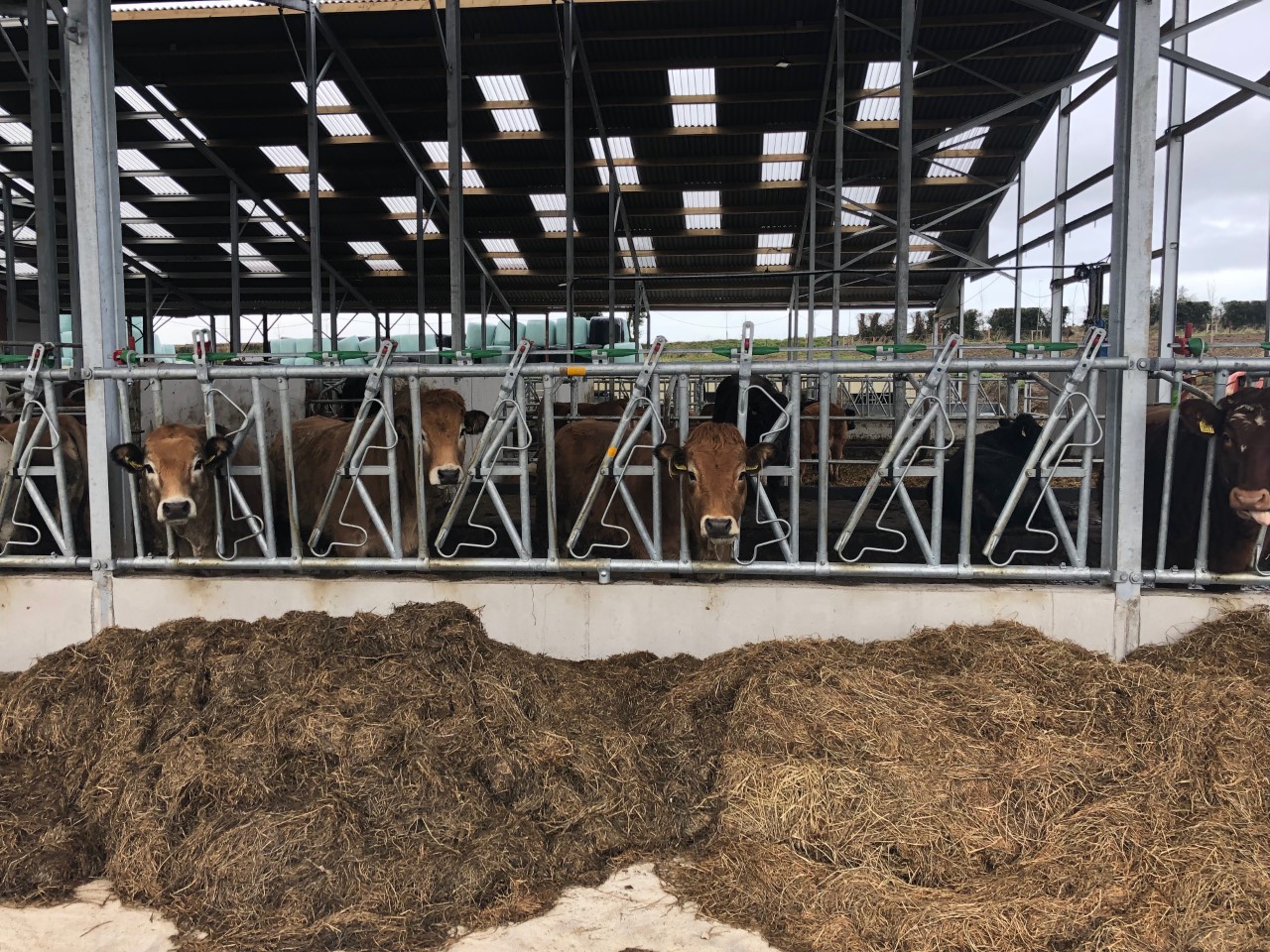 There are four wall-mounted drinkers that have a quick-release valve which allows PJ to clean and empty the troughs quickly. There are also two heavy-duty small drinkers installed in the calving shed. However, this part of the shed is incomplete.

The calving area incorporates part of the new shed and an old existing hayshed that PJ had to leave in order to get planning permission for the housing facility. 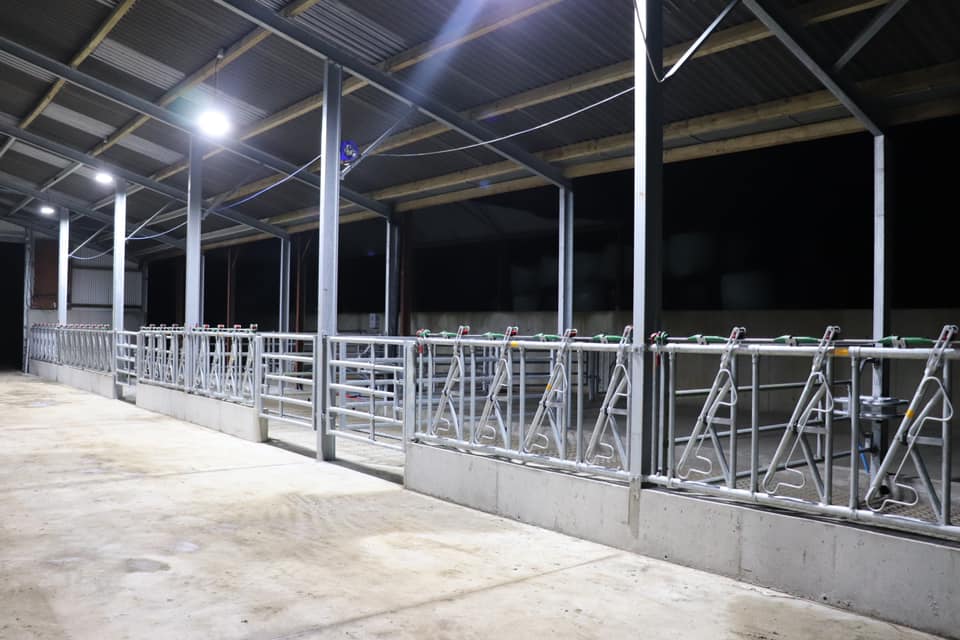 However, because the hayshed only spans three bays of the new cubicle shed, it means that the calving area is still incomplete. Moreover, the plan is to roof this area next summer. As of now, there is no panic to get it done as there is plenty of room to calve down cows for the time being.

There are also a number of LED lights installed in the shed, which PJ says “are so bright that you would think it’s daytime when you’re inside the shed”. 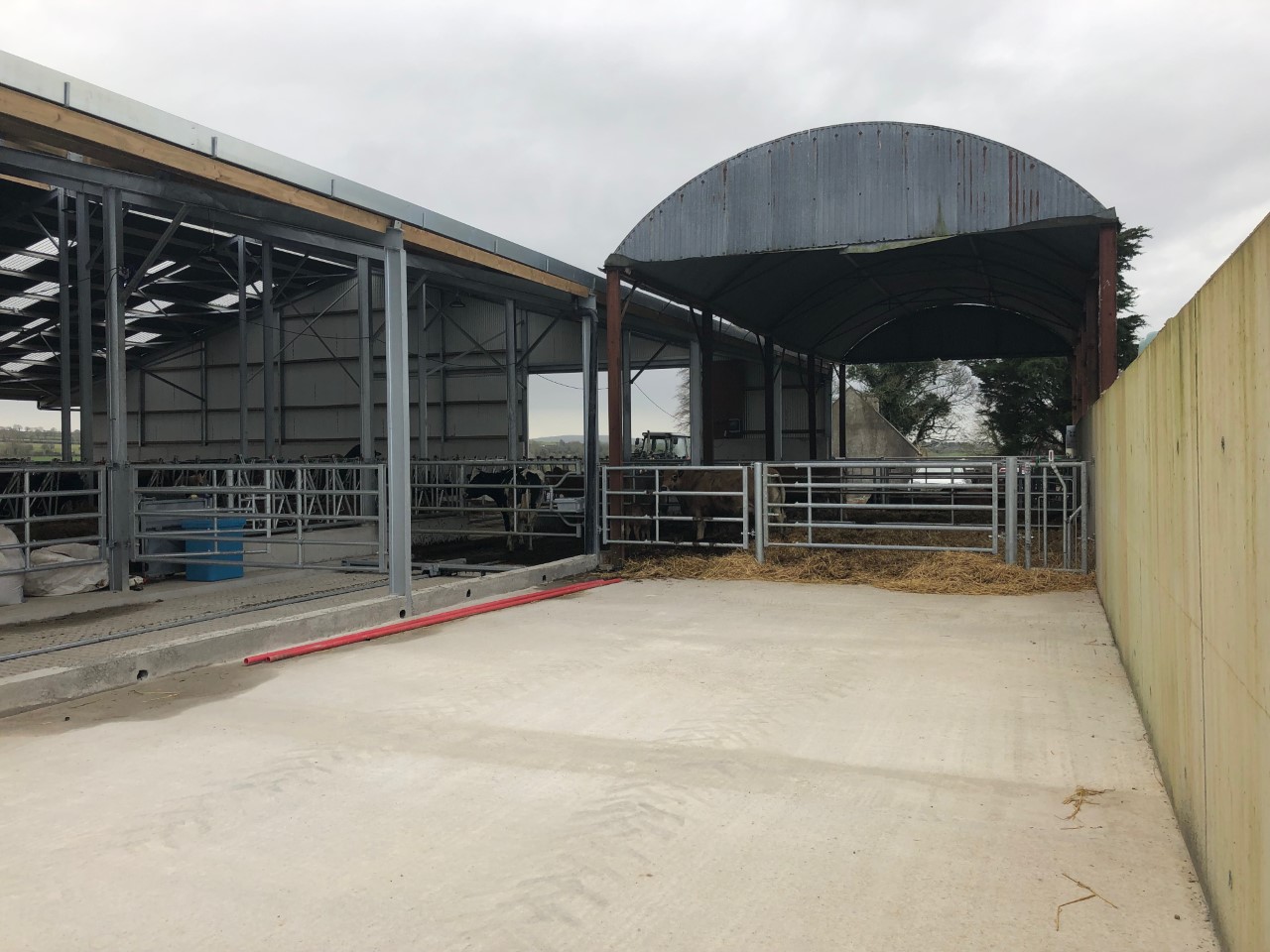 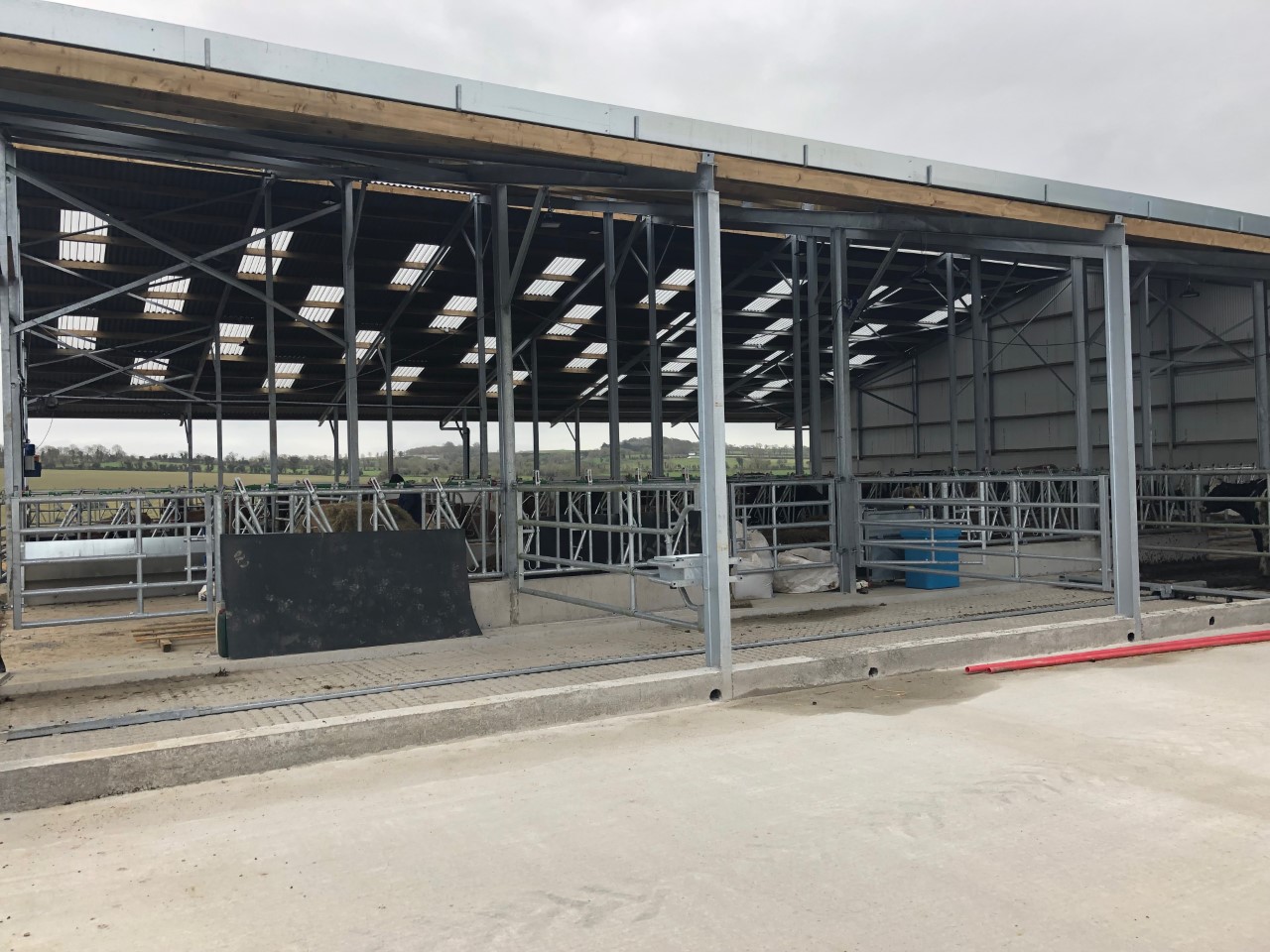 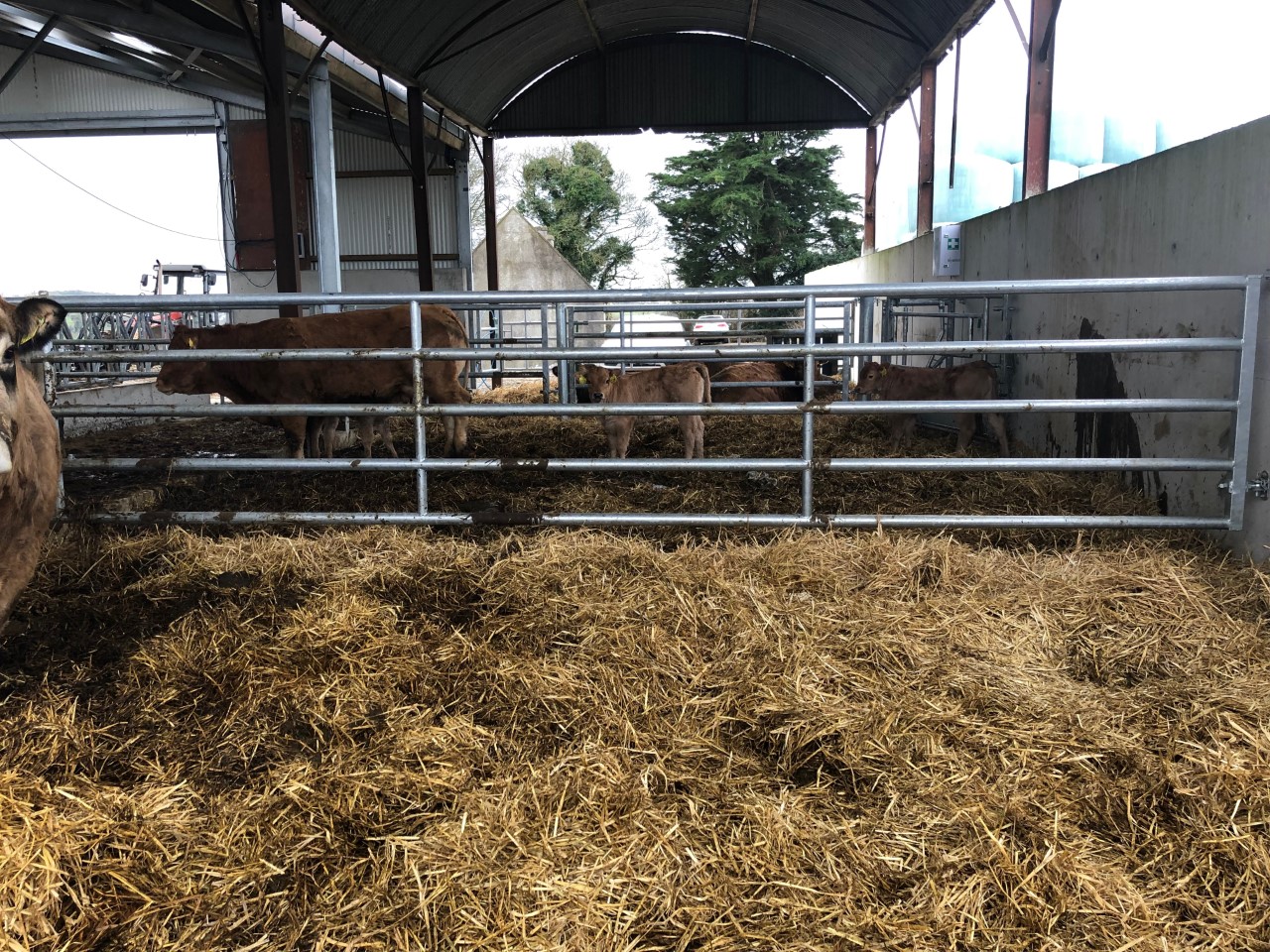 When it came to the design of the shed, PJ placed a huge emphasis on cow comfort. The mats on the cubicles have a double layer, with the top part “almost like a sponge”.

The mats – which were supplied by Wilson Agri – are 80mm thick. The bottom layer is 50mm thick, with a 30mm pad layer on top which is “quite soft”.

“The cows I have – especially the pedigree ones – are quite big animals and when they sprawl themselves out on the cubicle they cover every inch of it.

The main reason I decided on going for the cowcoon hybrid cow stall – supplied by Wilson Agri – was for optimum cow comfort. The one thing I like about them compared to other models is the bottom bar of the stall is made of plastic.

“Furthermore, when a cow lies down on the cubicle, her body will press against the flexible plastic bar and push it out which means it won’t cause the cow any discomfort. Whereas a cubicle that is made of pure steel, there is no give to it and it can be uncomfortable when a cow is lying down,” PJ explained.

To further aid cow comfort, PJ spreads sawdust on the cubicles. So far, there have been no issues with lameness since the cows were housed in the new shed. 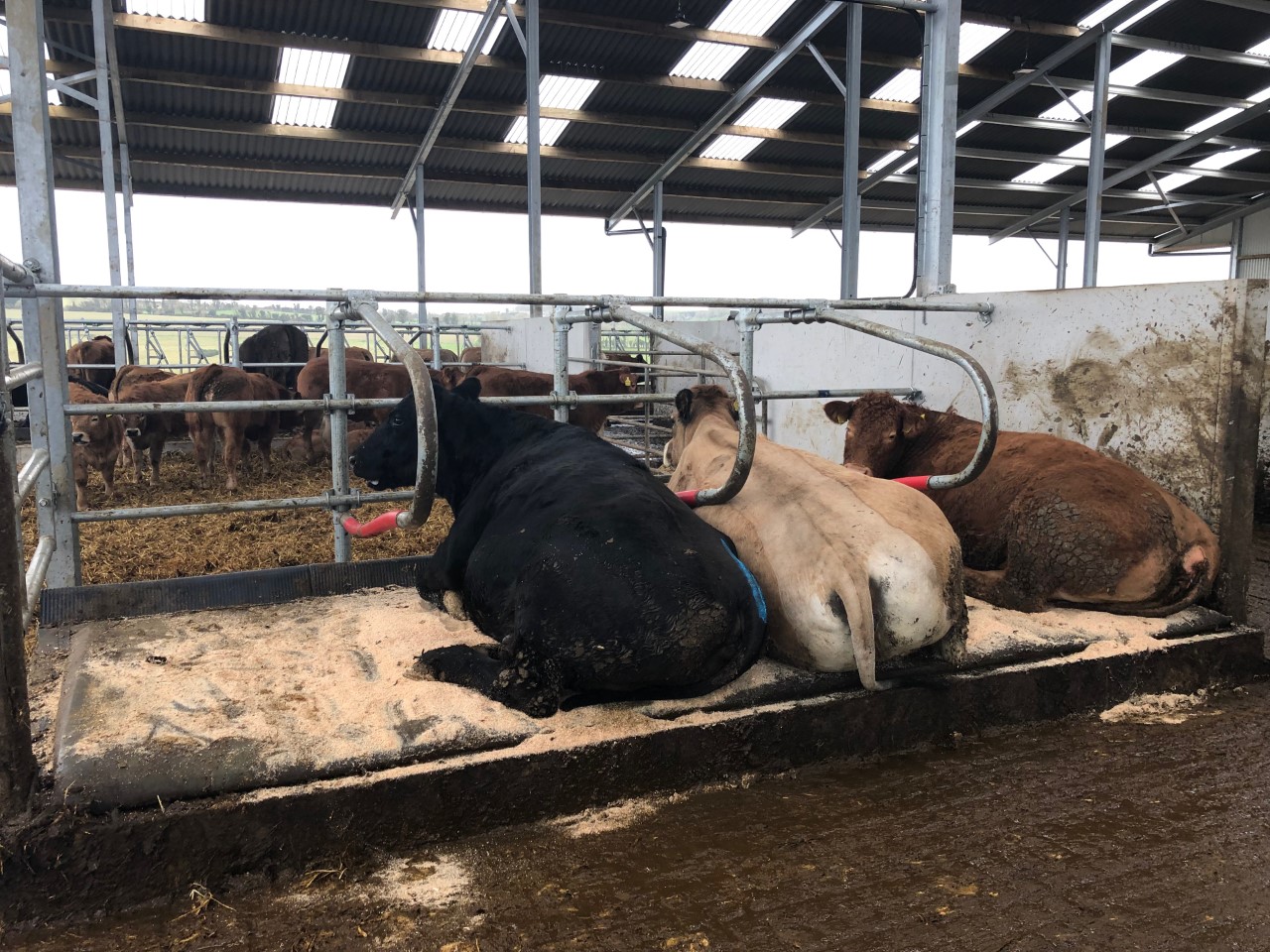 Included in the design is a creep area for the calves. However, the option is there for PJ in the future to replace this lieback area with 20 extra cubicles if he converts to dairy farming.

Furthermore, due to the farm operating a dual calving system, PJ required an area for calves to be housed during the winter period.

The calf pen is covered in straw and there is also a creep gate incorporated into the design to allow the calves access to the cows.

However, PJ has noticed that the calves prefer to lie on the cubicles. This has led to problems because there aren’t enough cubicles for the cows and the calves to lie on. This has meant that a few cows have had to lie down on the concrete floor.

At the moment, 29 calves have access to the creep area, with at least a dozen of them happier to lie on the cubicles than the calf pen, according to PJ. 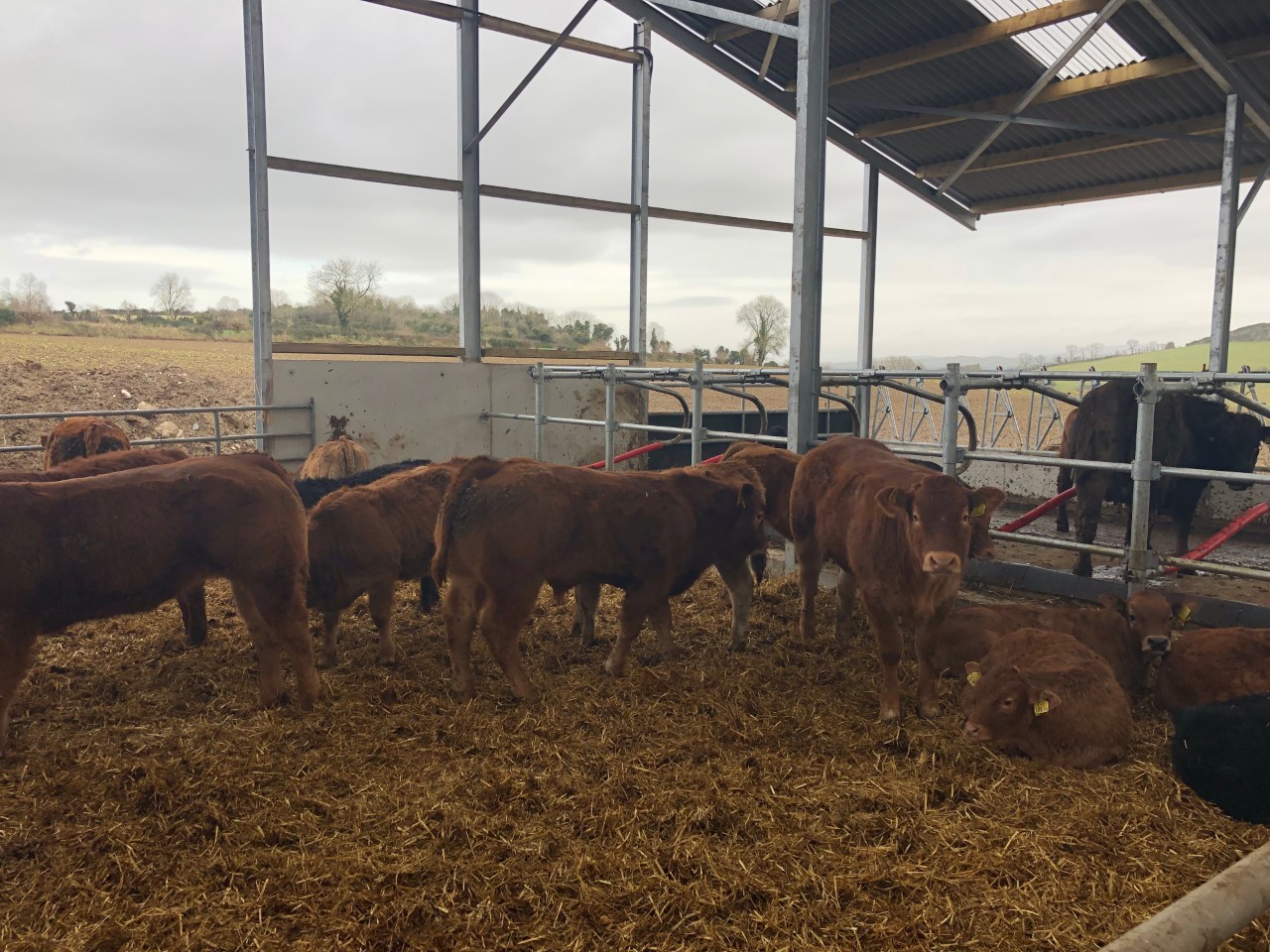 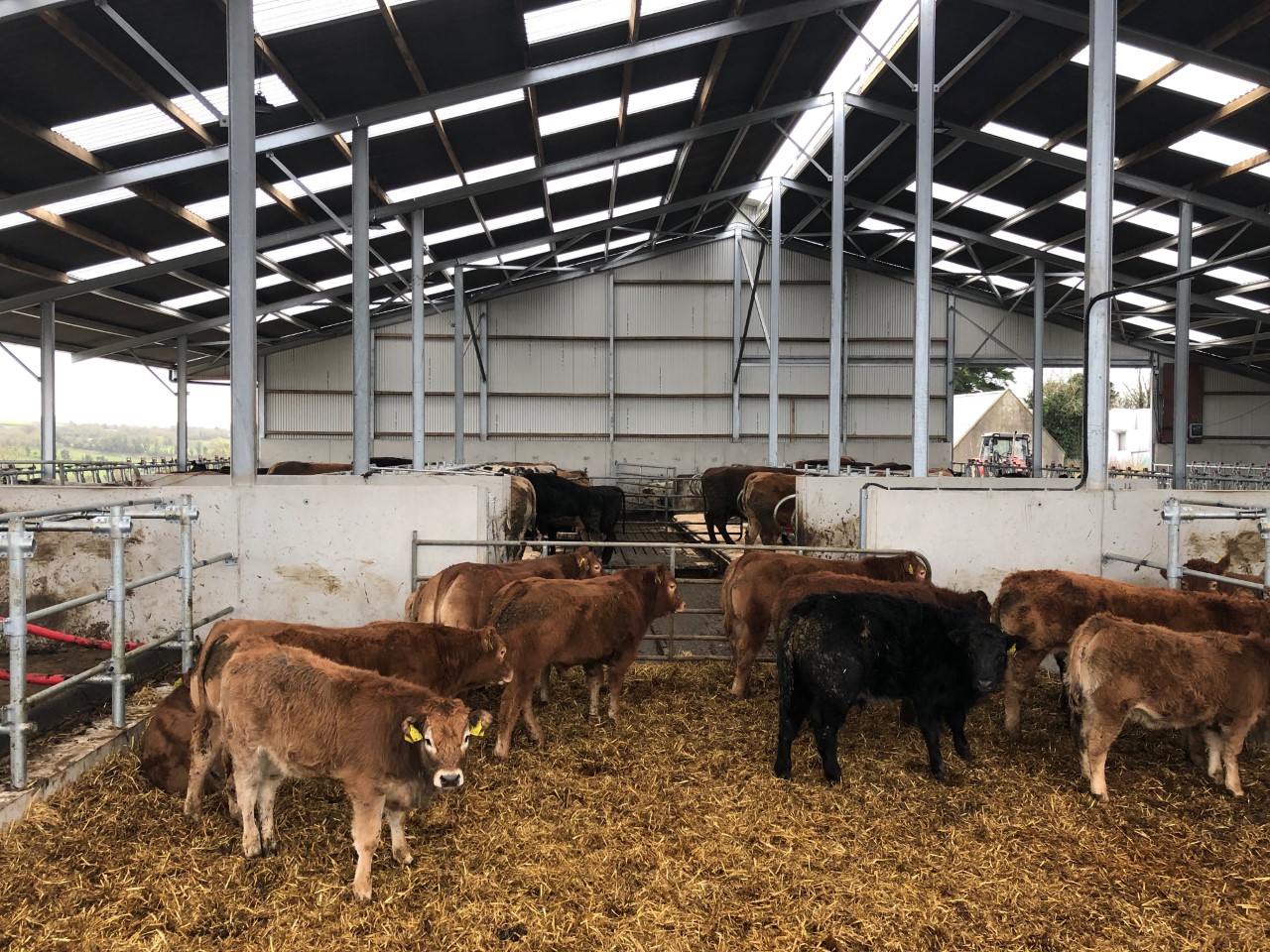 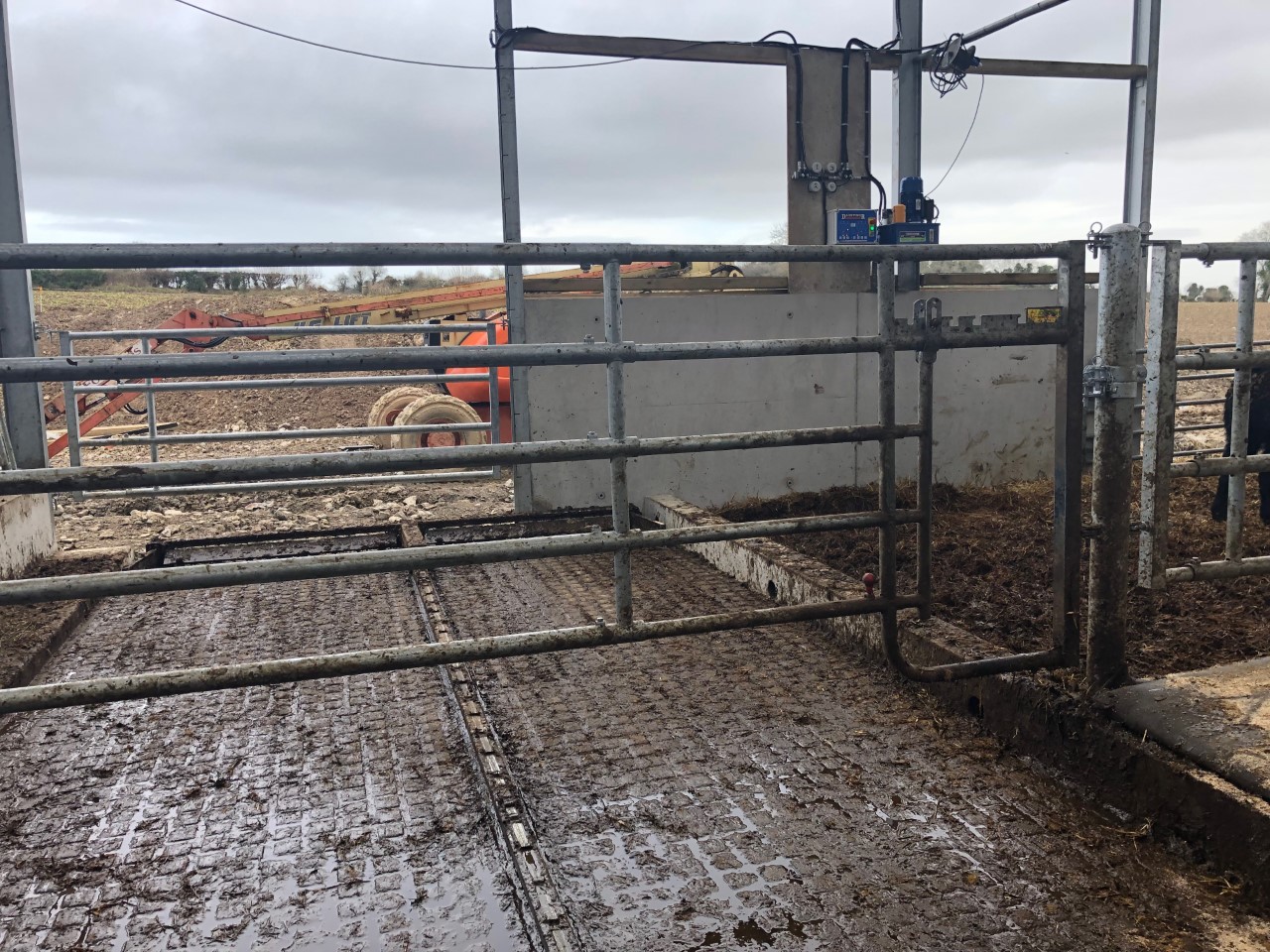 An interesting part of the new unit is the inclusion of a – Dairypower Equipment – Slurry Aeration System. The system – which has been in Ireland for over 20 years – cuts out the need for slurry to be agitated.

“The main reason I decided on installing this system was the way the slatted tank is designed. It is quite a big tank and the most efficient way I felt that the slurry would be agitated was by incorporating this system.

“There are pipes lined the whole way around the tank. The aeration system emits bubbles that rise up the tank and effectively help mix the slurry. This, in turn, helps to prevent the build-up of any harmful gases.

I spoke to quite a few farmers that have this system in place and they were very happy with it; so I decided to jump on the bandwagon and get it too.

“Furthermore, it is a relatively cheap system to run. I was worried that it might require a lot of power and end up costing me a fortune to run. However, to my surprise, it only costs 60c a day to run.” 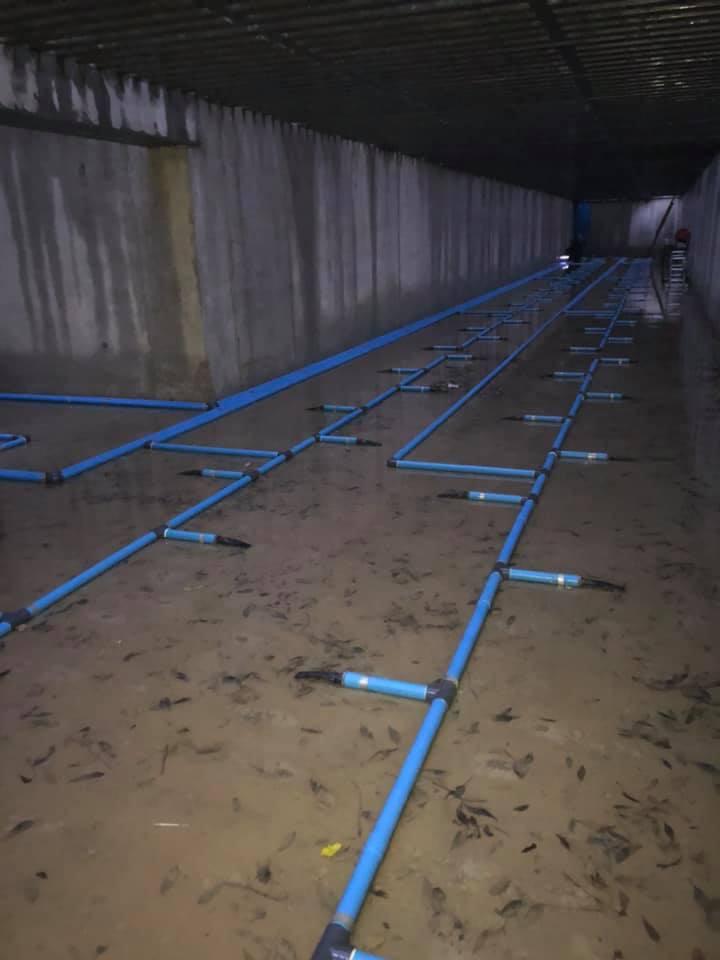 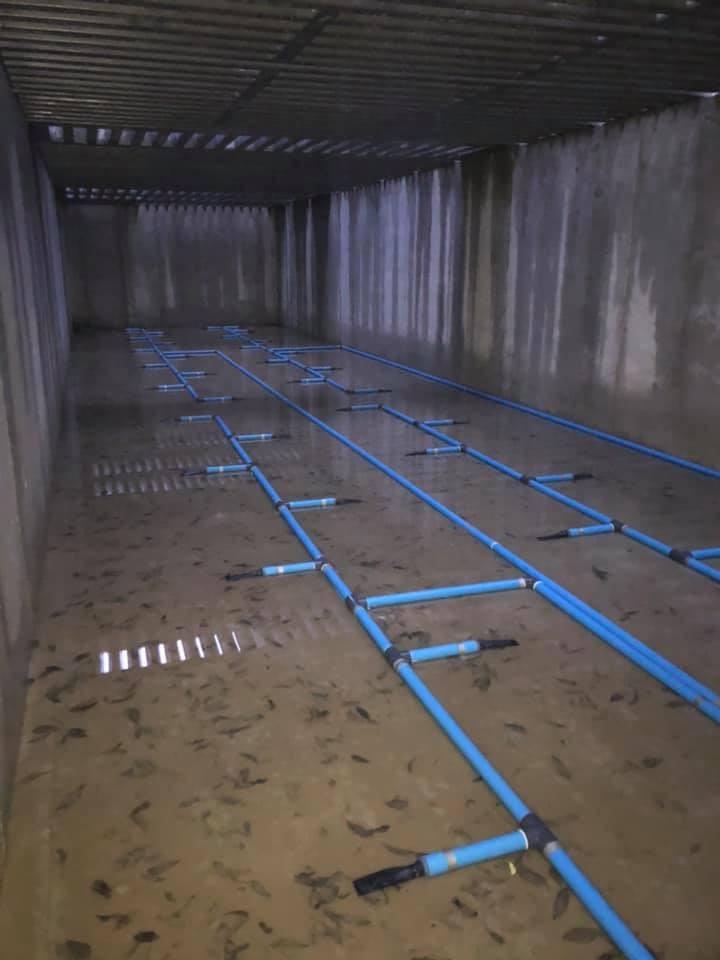 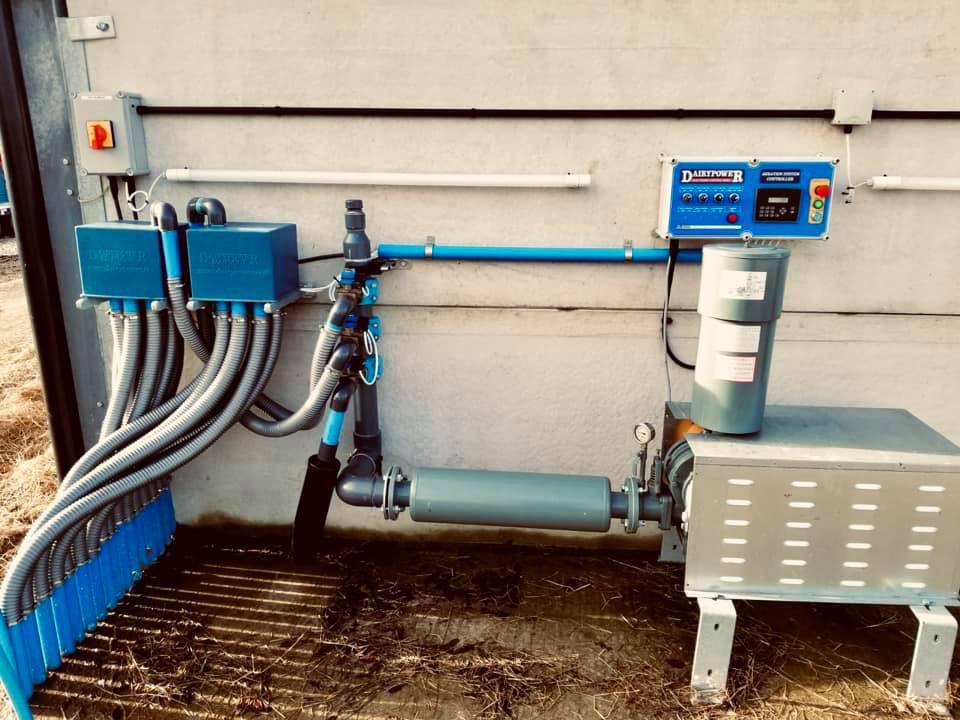 The build began in January 2018 and was finished the following December – just in time for winter housing. 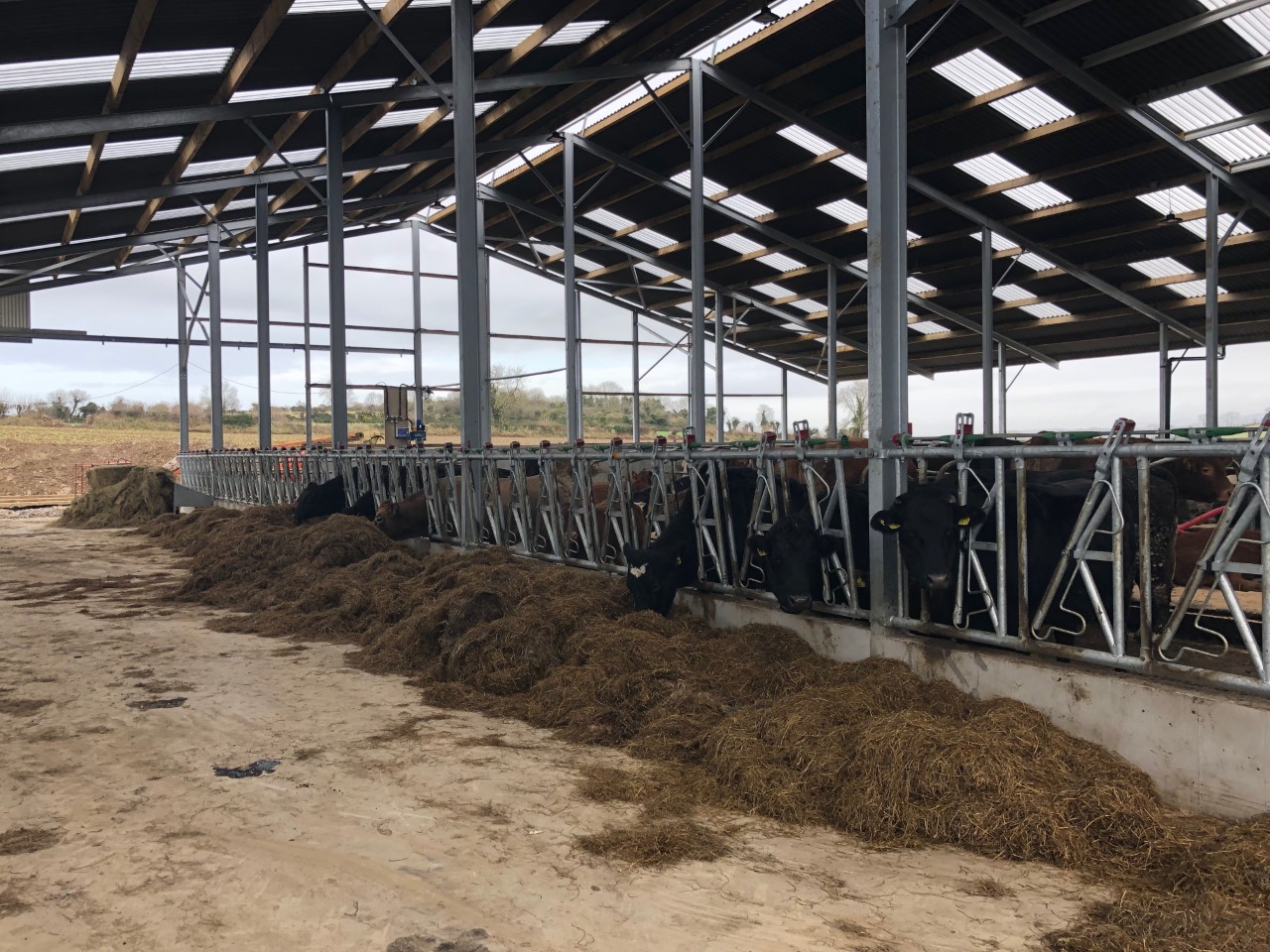 Commenting on the build, PJ said: “It was stressful at times, but I am glad with how it turned out. There was a big panic to get it finished just before Christmas, so I’m glad everything worked out well.

“The fact that that I am in partnership with my wife; it meant we were able to avail of the full TAMS grant which brought down the cost of the build immensely.

“The fact that I can change systems tomorrow if I want to and move into dairy farming is a big bonus about this shed.

At the moment there are 64 cubicles in the shed, but there is scope to add a further 20 if we want.

“All going well, when the shed is paid off we will look towards either installing a robotic-milking system or a herringbone parlour.

“However, before that can happen, the next task is to lay out the land around the shed into paddocks and make new roadways.

“This shed is the first step towards my goal of dairy farming, but in saying that I am very happy with the suckler herd and I hope that we will see an upturn in fortunes in the industry soon,” PJ concluded.