In this week’s Buildings Focus, AgriLand spoke with David Barry from Co. Westmeath who has recently built a new slatted unit.

The Westmeath native – along with his father – run a suckler calf-to-beef system. The father-and-son team don’t breed any of their own cows. Instead, they buy-in dairy crossbred heifers and run them with a Limousin bull.

Over the last few years, as cow number crept up, the Barry’s were getting tight for space within their existing sheds to house all their cattle.

They were forced to outwinter some of their stock; so, in 2018, David took the decision to build a new shed for his suckler cows, which would enable him to house all of his young stock in the existing sheds that were on the farm.

Speaking to AgriLand, David said: “Between not having enough space to house the cattle and having to move cows out of the slatted shed into the dry shed when they were about to calve, it was becoming hard to manage.

I work off-farm and, realistically, you would need two people to move cattle from one shed to another, so something had to change.

“The new shed and handling facility have made life so much easier for us and the task of moving cattle from shed-to-shed has turned into a one-man job.” 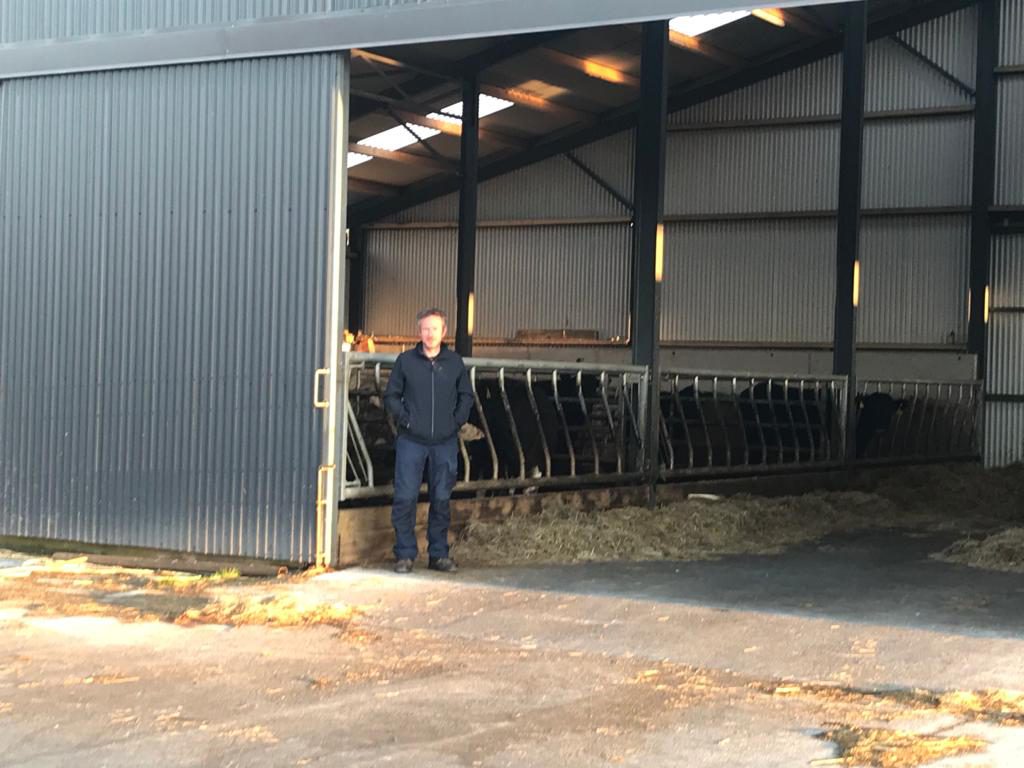 David had planned to have the shed completed long before it was finished last autumn. However, due to the delay in getting approval to begin work, he was left frustrated in his attempts to get cracking on with the job.

He explained: “Planning was sent in the spring of 2018 and I was hoping that we could start work that summer when the weather was good.

But, like most things, it never works out the way you would hope for and we didn’t get to begin construction until October of 2018.

“It was a slow process. We knocked the old manure pad and then dug out the tanks in October. The following month [November] the tanks went in.

“However, because we got the grant on the build, we had to let the tanks settle for a couple of months before we could crack on with the next step, which turned out to be the following spring, in 2019.

“Under the terms of the grant, you have to leave the tanks to settle for a certain period of time. In general, it was a very stop-start process.

“Between getting planning and erecting the shed, it took the best part of 17 months to complete.” 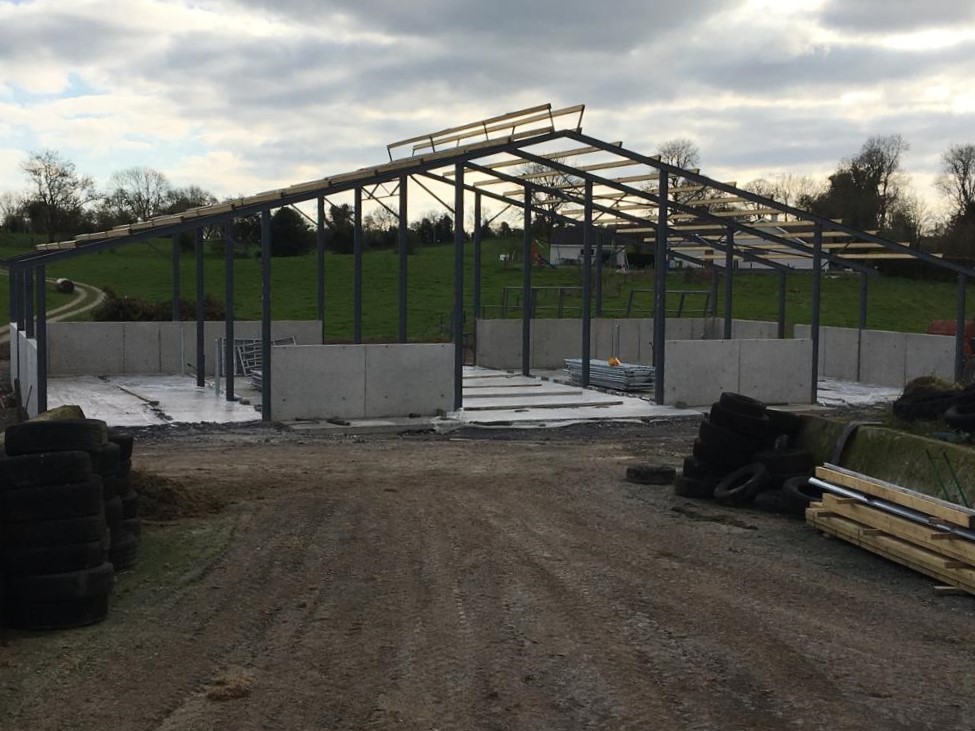 The new building was erected on an old dungstead that was beside the existing slatted unit. The dung pad was knocked and the tanks were dug out by Dowdall Plant Hire – which also did the concrete work.

According to David, the excavation process was plain sailing, with no issues arising.

The slats were sourced from Maxwell Concrete. The shed was designed and sourced from Rossdrum Engineering. The shed itself was erected by Liam Smith of Maintenance Matters.

Advertisement
The new build is a three-bay, double with a lie-back area incorporated on either side of the slats. On one side of the shed, there is a small access door, that allows David to run his cattle up a crush that is part of the new handling facility.

There are four sliding-doors incorporated into the build, two of which are at either end of the feeding passageway, while the other two are at the front of the shed – that lead into the creep area at either side of the shed.

Taking a look inside the unit, there are a number of features included that make the task of handling cattle easy and safe.

David opted to install calving gates in every second pen in the creep area, which makes life easier for him, as before, he would have to move cows between sheds when they were due to calve.

He explained: “The calving gates were probably the best money I spent inside the shed, along with the calving camera.

“It makes the task of calving the cows so much easier and safer. I installed a camera as well, which is very handy, especially when I’m not around, so I can keep an eye on the cows when I’m away.

If I think a cow is going to calve soon, all I do is open the gate between the slats and the creep area and let her have the freedom of the pen to herself.

“I find the cows are less stressed in the new shed, mainly because they aren’t being moved from one shed to the next when they are close to calving – as they would have been in previous times.

“Once they go into the new shed for the winter, they stay there until they calve and if the weather is bad they stay in. I have creep gates in each pen, that gives the calves access to both the creep and slatted area.” 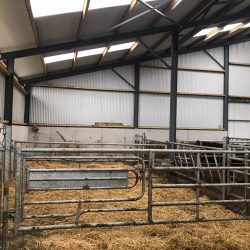 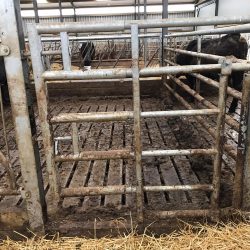 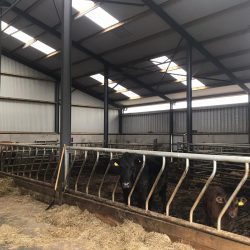 In terms of the creep area, to stop the calves dragging the straw into the slatted area, Stephen fixed a timber board the length of the building between the two areas to stop straw going into the tank.

A problem David and his father encountered with their other sheds was poor ventilation. The original sheds, which were built quite some time ago, have a lower roof than typical new builds have nowadays.

This was something the Barry’s wanted to put right with their new shed.

David said: “Good airflow throughout a shed is vitally important. Back in the day, when sheds were built it wasn’t considered important, nor was natural daylight coming into the shed.” 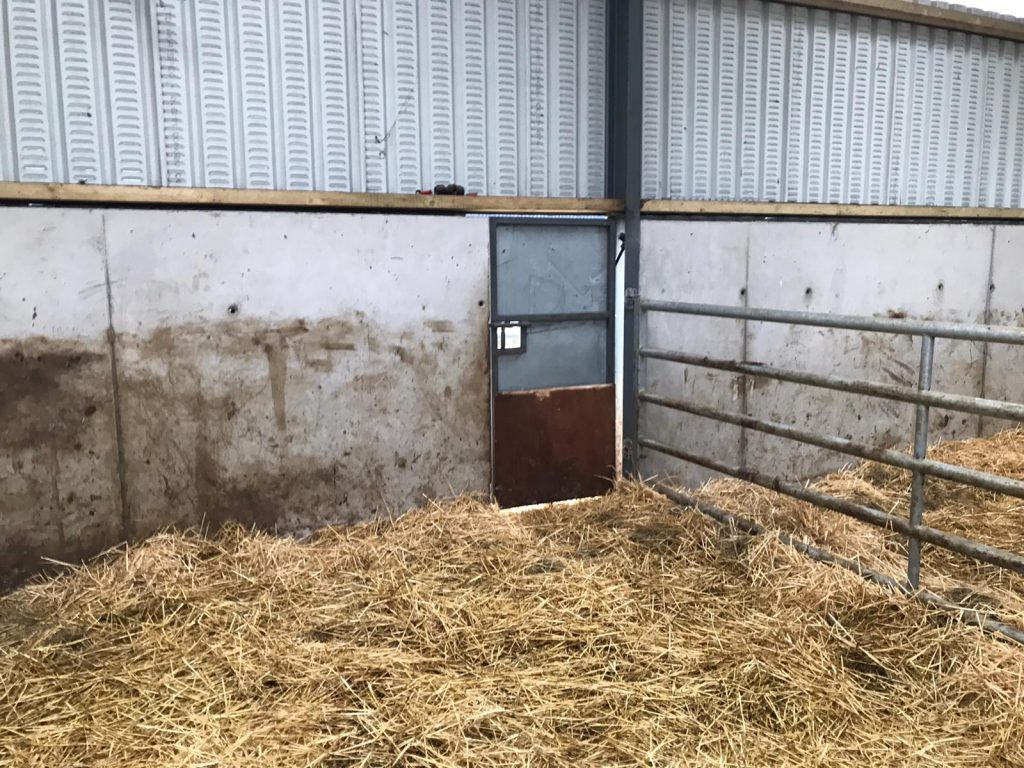 He added: “I had vented sheeting installed on both sides of the shed. I also left a gap between the eve gutters and the sheeting on the side of the shed, which increases the airflow in and out of the shed. Moreover, the sliding doors at either end of the passageway are left open 99% of the time.

I have seen first-hand the problems poor ventilation can cause to the health of cattle on our farm.

“Thankfully, we haven’t had any issues with calves getting sick or anything; the shed isn’t one bit stuffy.”

The entire inside of the shed, including the feeding barriers, calving gates, creep gates, and water troughs were sourced from Condon Engineering. David installed all the gates and barriers himself.

He also purchased four LED lights. The wiring was carried out by a local electrician – Peter Ledwith. 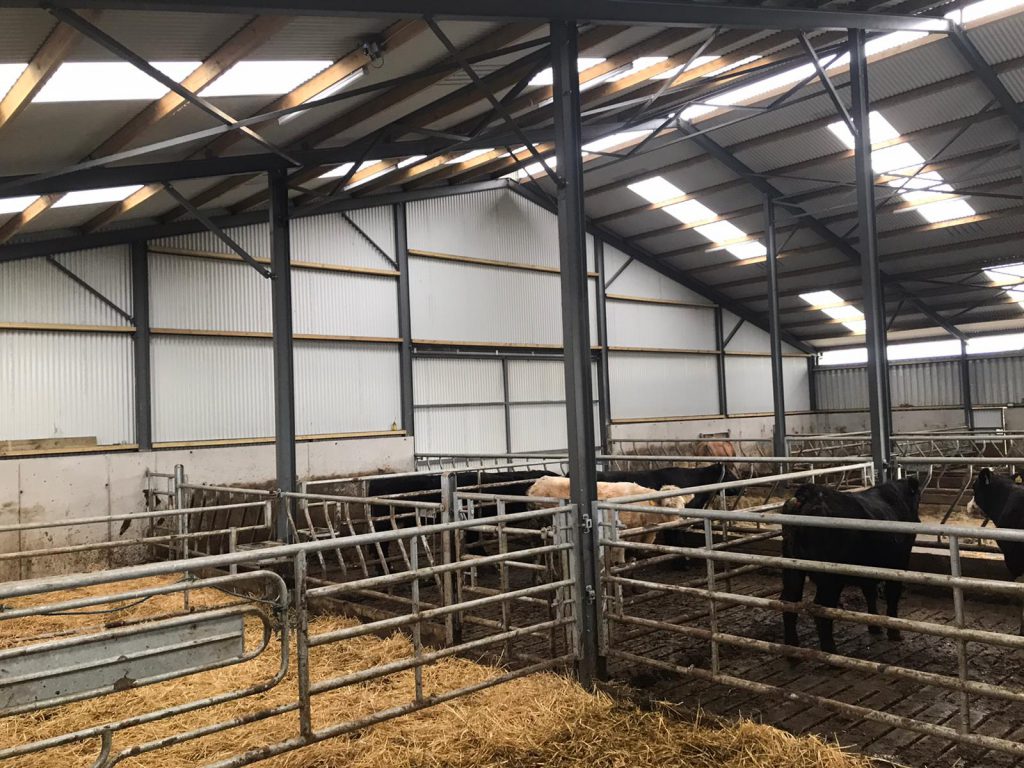 As mentioned already, the task of moving cattle from one shed to the next, in particular, the cows, when they were due to calve, was a problem, as it required two people to do.

David isn’t around during the day, from Monday to Friday, so to make the task of moving and handling cattle a one-man job, the father-and-son team decided to install a crush and collecting area between the new build and the existing sheds, which David says has “worked a treat”. 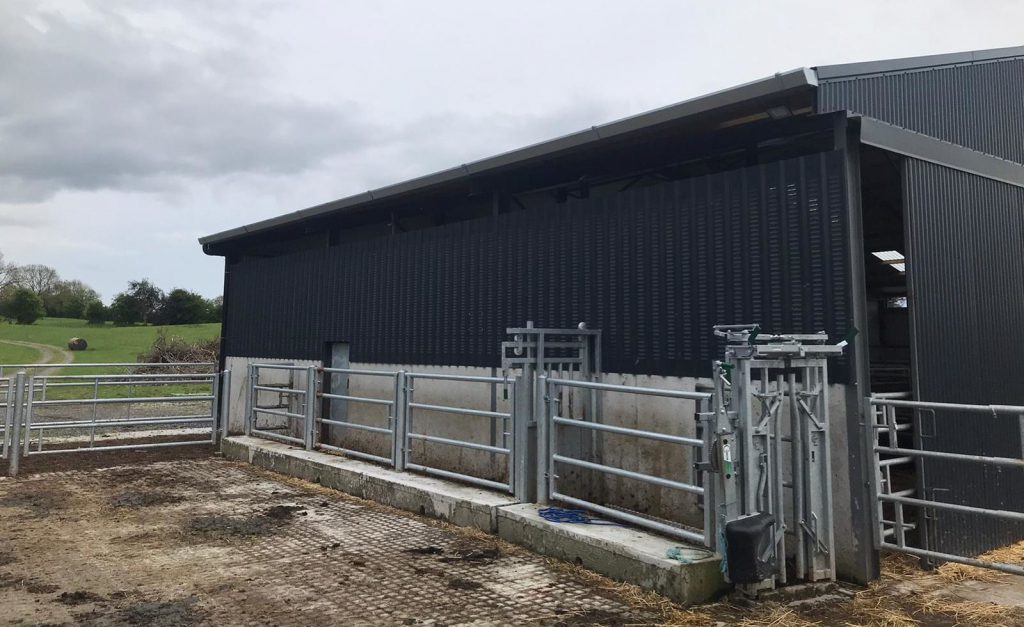 He added: “If I wanted to dose the cattle in the new shed now, I could let run them up the crush through the access door in the creep area and run them back in through the sliding door without them getting mixed with the other cattle.

It’s a great job and, again, I can do it on my own when I come home in the evenings, whereas, before I couldn’t.

“I can divide the holding yard into two sections as well, which is very handy when I want to dose the younger stock that are housed in the old sheds. 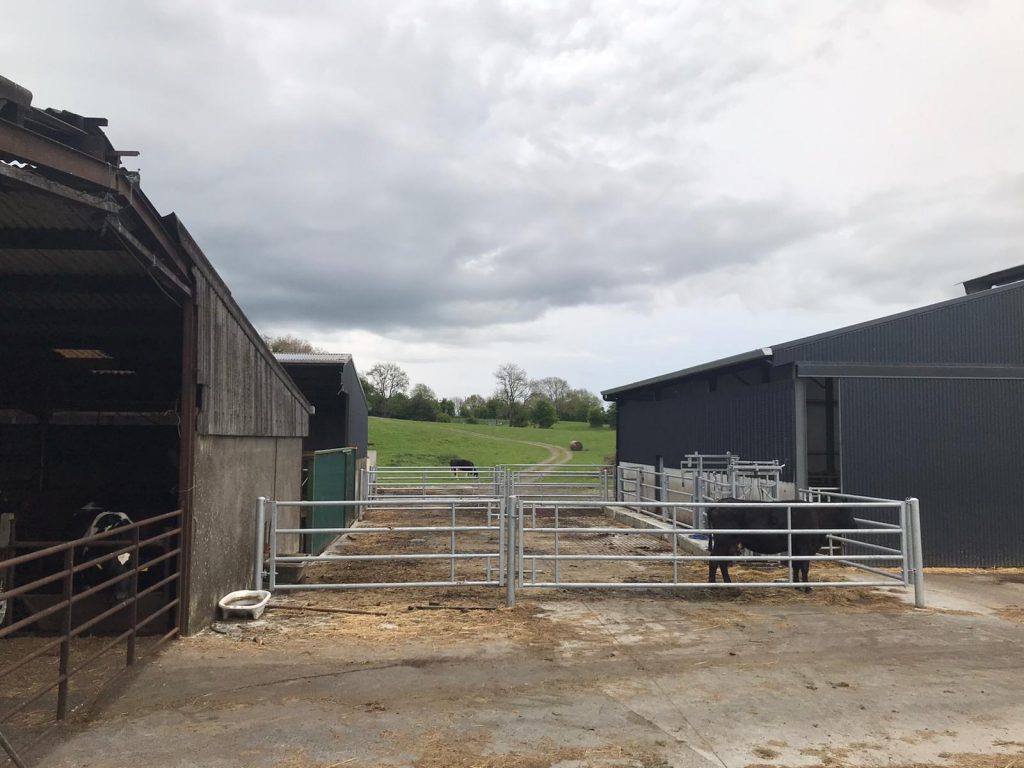 The overall cost of the build, which includes the installation of the handling facility, came to €100,000 (including VAT).

Commenting on the new build, David said: “My goal starting out was to make the task of handling and managing the cattle more efficient and that’s what I have achieved.

Look, I hate to have to think about the figures when it comes to paying it back, with the way beef prices are at the moment, but I had to do something because we couldn’t keep going the way we were.

“The only thing I will probably look at doing down the line is installing mats on the slats. We had a few lame cows over the winter, so something will have to be done there.

“Other than that, it’s a matter of maintaining what we have and hoping that the investment we made will be rewarded with good beef prices sooner rather than later.”

Thanks to David and Stephen (and all involved) for help in compiling this piece remotely (and for sending in pictures). Due to ongoing coronavirus (Covid-19) restrictions, on-farm visits are not possible at this time. 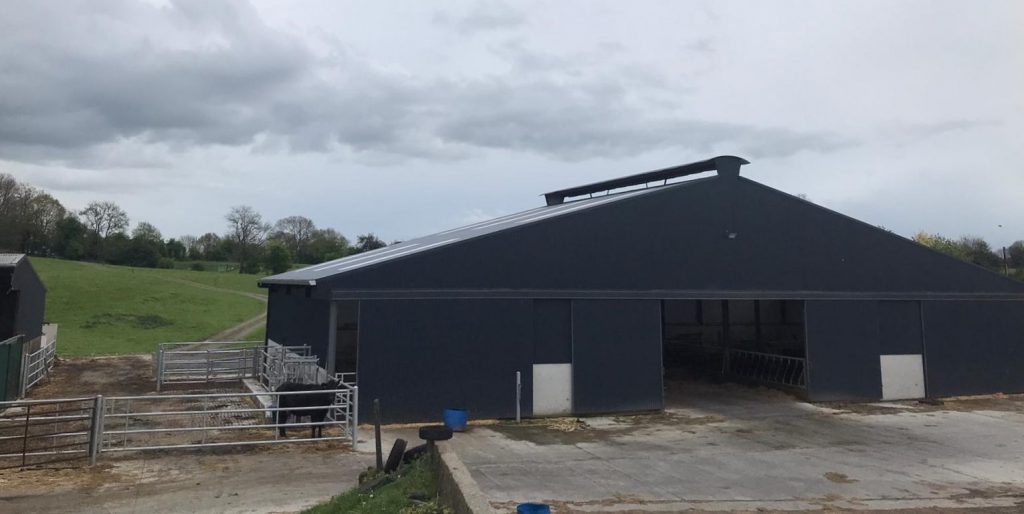