Residing just outside Clonmore in Co. Tipperary is beef farmer John Maher, who has recently built a new loose shed and a first-class handling facility.

The secondary school teacher currently has 250 head of stock on the farm but has the capacity to run 300 on his 75ha which consists of good-quality grassland.

Up until last year, John was housing his stock between three different slatted sheds. He buys in weanlings and stores, which consist of Limousin, Charolais and Belgian Blues which are then all brought to slaughter.

John’s decision to build a loose shed was down to the fact that he felt the weanlings he was buying in were not reaching their target weight on the slats and having had a small dry bedded area on the farm already, he saw how well they did on straw bedding in comparison to the slatted sheds, while a new handling area was badly needed to connect all housing facilities on the farm.

Speaking to AgriLand about the new loose shed and handling facility on the farm, John said: “The majority of the cattle on the farm are housed in slatted sheds and I just found that the weanlings I was buying were not reaching their target weight on the slats.

I had a three-bay loose shed and I used to put some of the weanlings in it and I found they used to thrive much better in it than in the slats and I suppose that was a big factor in me building a new loose shed to accommodate them.

“As well as that, I built a new handling facility. I had a good handling facility before but it was just all the sheds were so isolated around the farm that it just made it very difficult to move them from the sheds over to the crush.

“I wanted a new handling area which would allow me to connect all three sheds to make life easier because it was torture in the past.” 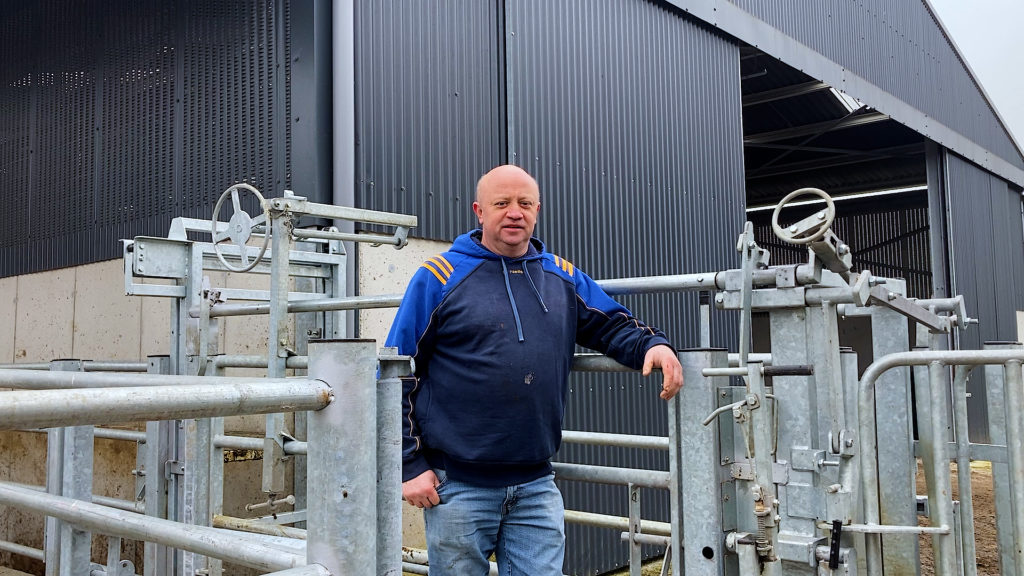 Roughy three spans of the shed (18.3m) are taken up by the weanlings, while the front span is where silage is fed.

On one side of the shed, where the new handling unit lies, a roof overhang (2.45m) was incorporated over the crush and work area.

Data source: ADPS. Click on the image to enlarge.

In terms of the handling unit, there is a lot more going on. Starting with the four group pens. Each pen is 4.7m long and 4.2m wide. A small slip through space is in every pen to allow John or anyone to exit a pen quickly.

A chute (race), which goes all the way through the handling area – passing each pen – up to the semi-circular forcing pen was incorporated into the design.

Each group pen can be opened and it will divert cattle up the chute to where the cattle enter the crush. This chute is just over 2m wide and 19m long.

The semi-circular forcing area is one of the standout features of the design. This area is 5.8m wide and 7.6 long. A ramp that leads from one of the slatted sheds directly into one of the group pens was also built. It is 1.5m wide 5.8m long. There is also a small loading pen at the front of the unit which is 2.6m wide and 2.6 long. 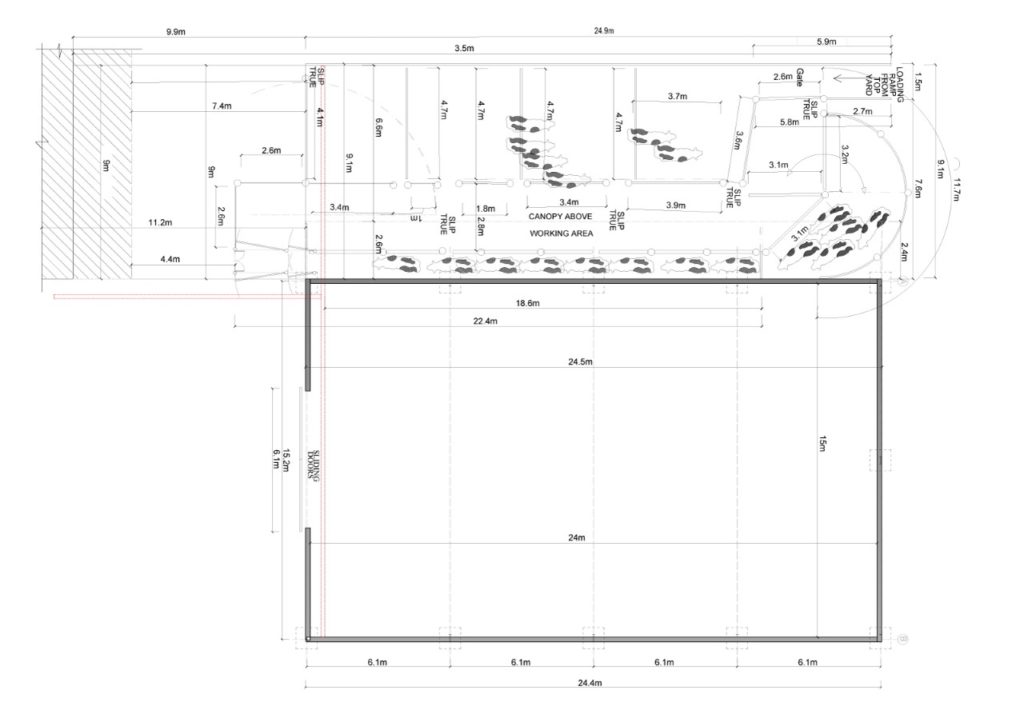 Data source: ADPS. Click on the image to enlarge.

Looking at the features of the loose shed, it is a simple design that works perfectly for John. The shed could be laid out in a number of different ways if needs be.

At the moment, weanlings are housed on peat and straw. Not all of the shed is bedded in straw, however.

A 2.5m wide gap is left from the feed face to where the bedding begins. The reason for this to be able to collect run-off from the bedding; John joined up a pipe running from the new loose shed to one of the slatted sheds – which runs underneath the new handling facility. To prevent straw from clogging up this area, timber boards are placed in front of it. 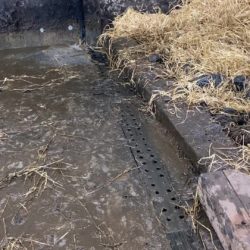 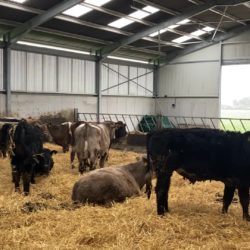 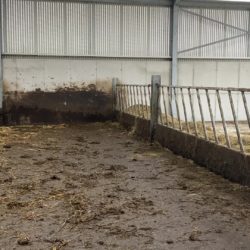 Three diagonal feed barriers are set up across the width of the shed, while one water trough was also installed. 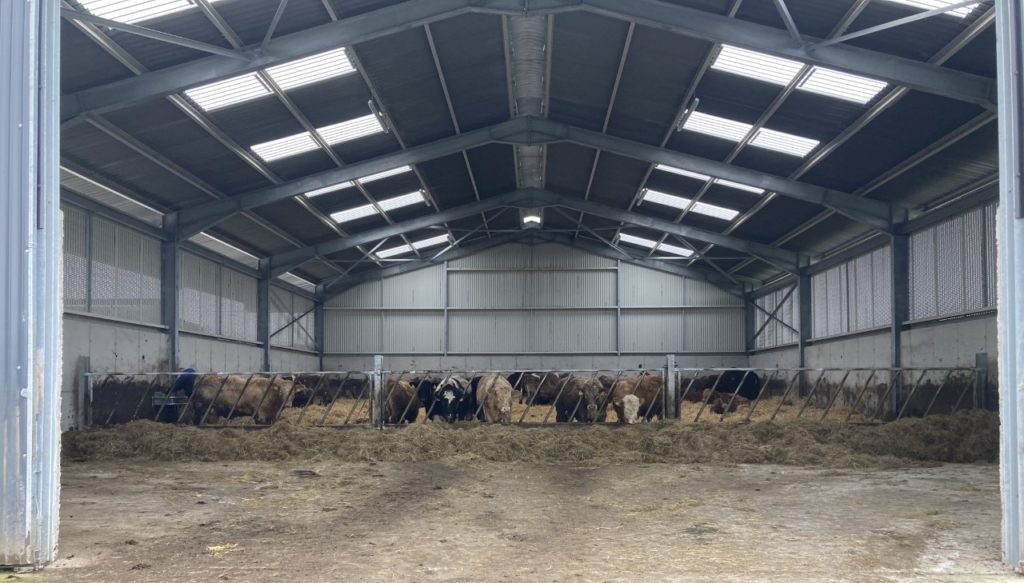 The new handling unit is very impressive and connects all the sheds on the farm, which makes life for John far easier.

Safety and being able to do jobs quickly and as easily as possible were what he was looking for from this project. John is a construction and technical graphics teacher, so he had drawings already done up of what he wanted before he made contact with Aidan Kelly – of Agri Design and Planning Services – who took it from there and did up the finished design of both the handling facility and loose shed.

Due to his off-farm work, John, like many others, is forced to do any jobs around the farm, morning and evening and because he does the bulk of the farming on his own, he needed a handling facility that could be managed by one person.

The original handling facility on the farm made gathering cattle a taxing job, with lots of gates and the tractor being used to plug gaps around the yard in order to move the cattle into the old yard and crush. 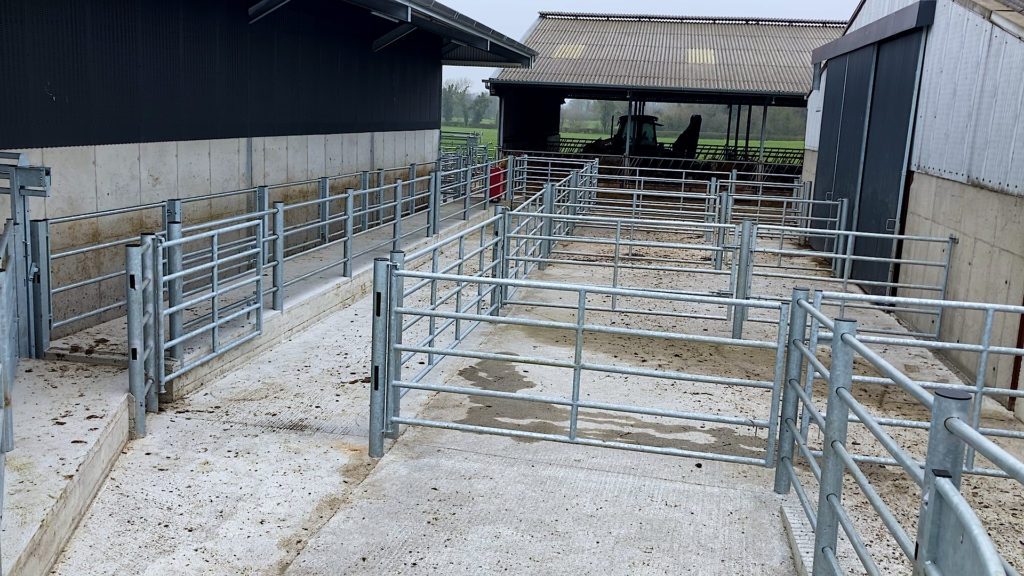 As mentioned, four decent-sized group pens are incorporated into the design. Each pen opens out to the chute which will lead cattle up to the back of the crush or down to the loading bay pen.

In every pen is a small slip-through space that enables anyone in the pen to exit without having to open or even climb a gate (pictured below). 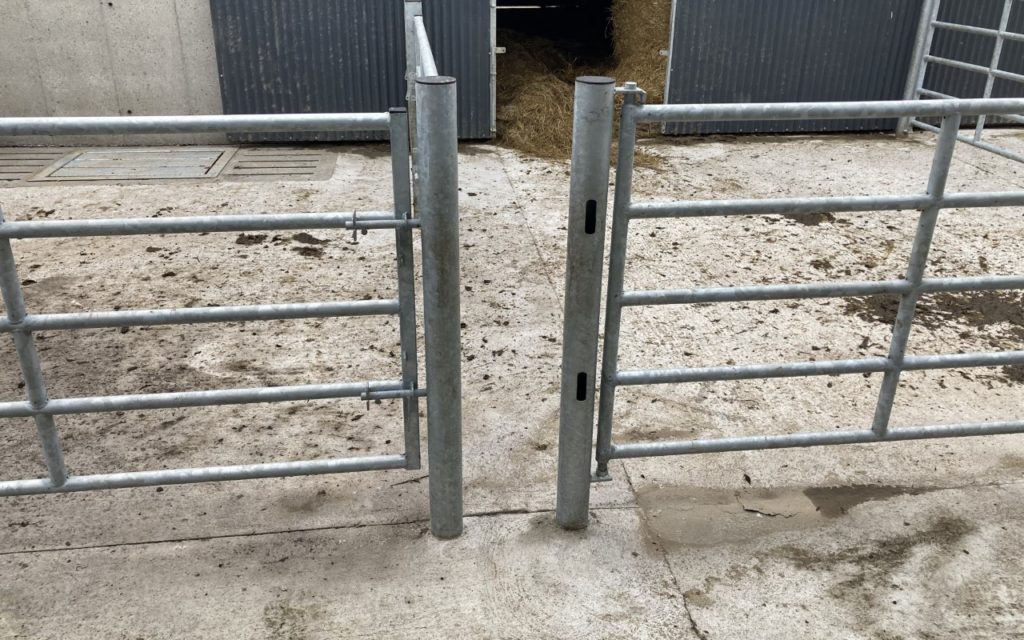 The semi-circular forcing pen at the top of the unit is probably one of the standout features which forces the cattle towards the mouth of the crush.

Again the incorporation of guillotine gates rather than a gate that swings makes it safer for John to close the cattle in at the back of the crush. 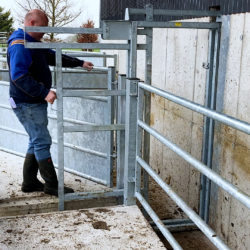 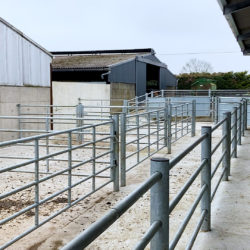 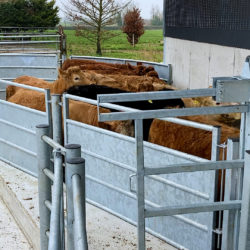 An interesting tweak to the back guillotine gate saw John remove one of the lower horizontal bars. The reason for this is for him to be able to castrate bulls. Again, in terms of operator safety, because there is another bar below this, a kick from a bull won’t reach John. 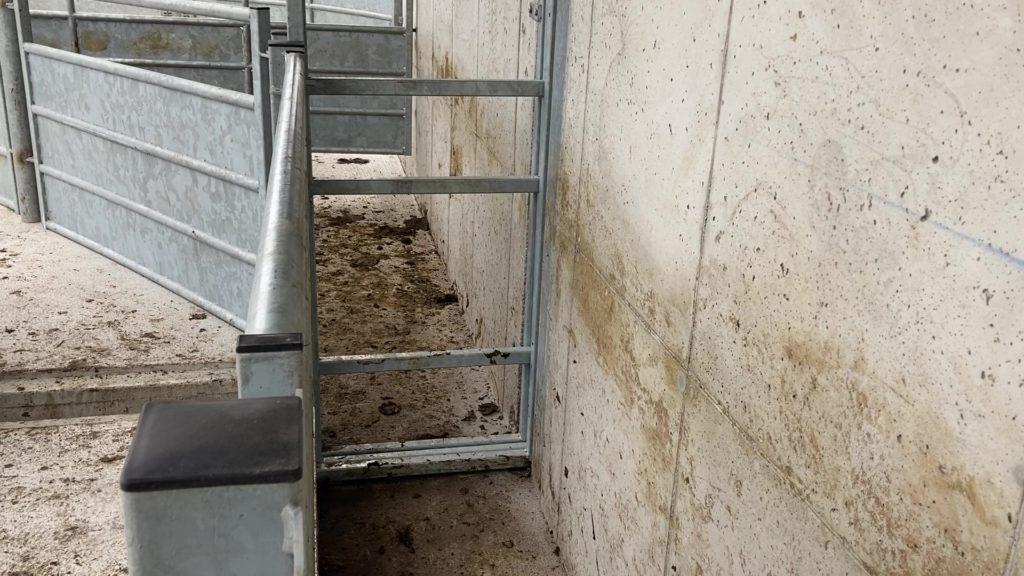 Towards the rear of the unit is a ramp which leads up to the furthermost slatted shed. This ramp leads down into one of the large group pens. Again, tying the three sheds together was the aim of the game and this ramp does the job nicely. 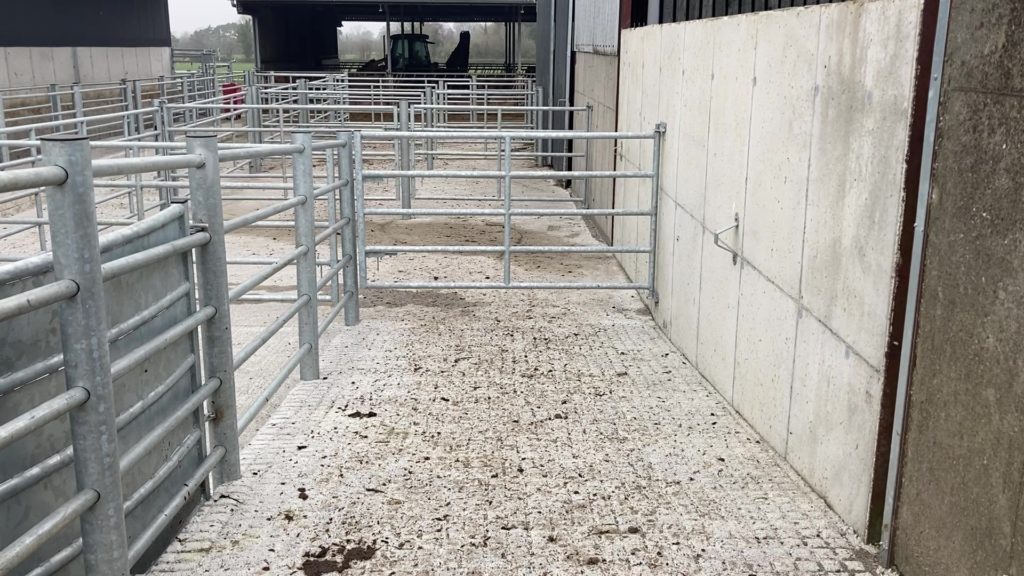 Down towards the front of the handling area, we are going to take a look at the crush, working area, isolation crate, skulling gate and loading area.

The crush which is up against the new loose shed is 0.7m wide. Instead of going with normal barriers along the length of the crush, John decided to put in gates, which is handy if an animal got caught or went down in the crush, that it could be opened from the side. 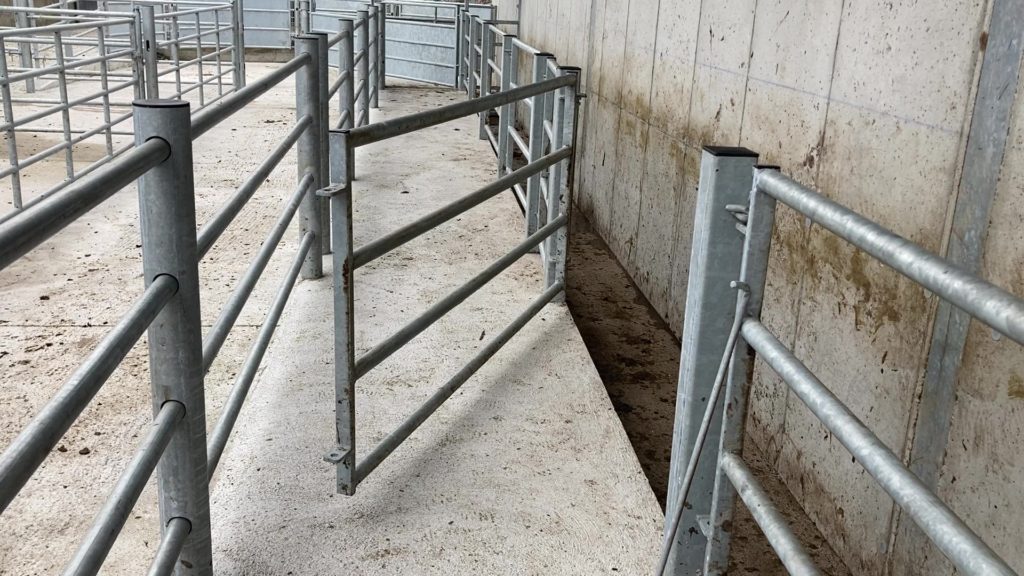 The working area along the crush is above the level of the rest of the yard, to make life easier for John when handling cattle.

A canopy protrudes over the crush and working area, which is very handy when applying pour on, for example, if the weather is wet, as the cattle can be run through the crush and returned to the shed quite quickly for the pour on to dry in. The canopy covers over the working area as well help to keep whoever is working in that area dry.

A second guillotine gate is installed towards the front of the crush. This basically allows John to lock in one animal in the isolation crate. From there he can widen or tighten the skulling gate using a lever to lock the bullock’s head in. From there, the head scoop can be used to hold the bullock’s head steady for dosing or tagging for example. 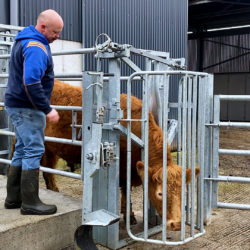 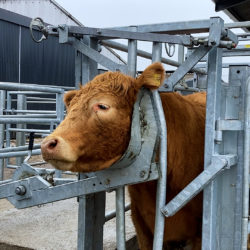 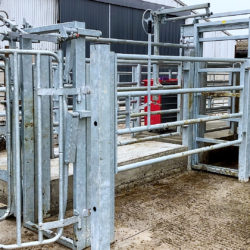 Lastly, a loading pen is located at the front of the handling area for John to back in his trailer and load up the cattle with ease. 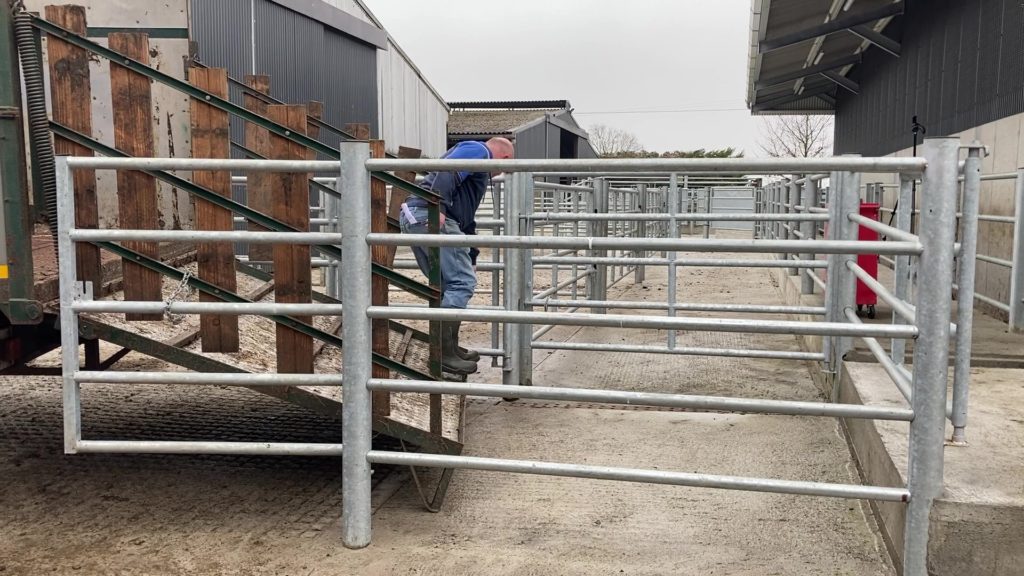 The project initially started in February of 2020; however, due to Covid-19, work was delayed and it wasn’t ready for use until the end of September.

The site where the new shed and handling facility lies was once a storage area for silage. Gary Dann came in and levelled the site and dug out the foundation. The concrete for the job was supplied by Loughnane Concrete.

The shed itself was sourced and erected by O’Dywer Steel. John Burke and Denis Armstrong erected the precast walls. JJ Rusk and Vincent Lawlor fitted out the whole handling facility. David Patterson did all the electrical work. All of the gates, barriers, water trough, isolation crate, head scoop and circular forcing pen were sourced from O’Donnell Engineering.

John was able to avail of the Targeted Agricultural Modernisation Scheme (TAMS II). The overall cost of the shed and handling facility came to just over €93,000 (including VAT).

Cost breakdown of the shed and handling facility:

However, when the grant is taken into account and the fact John was able to reclaim the VAT, the cost of the project is standing at €54,758.

Giving his final thoughts, John said: “It turned out exactly how I wanted it. The weanlings are very content in the new accommodation and I think they are doing better than the other weanlings that are in the slatted house.

They are both fed the same, it’s just you can’t beat the straw or peat bedding compared to the slats, especially when it comes to younger stock.

“The handling area was the big one for me. There are still a few bits to finish off yet but it is as good as done.

“I wanted to connect all the sheds to it and that’s what we have achieved. It’s made life so much easier for me the few times I have used it so far. Like I said, I wanted to be safe when handling or moving the cattle and that’s what I can do now, whereas before it wasn’t the case really.” 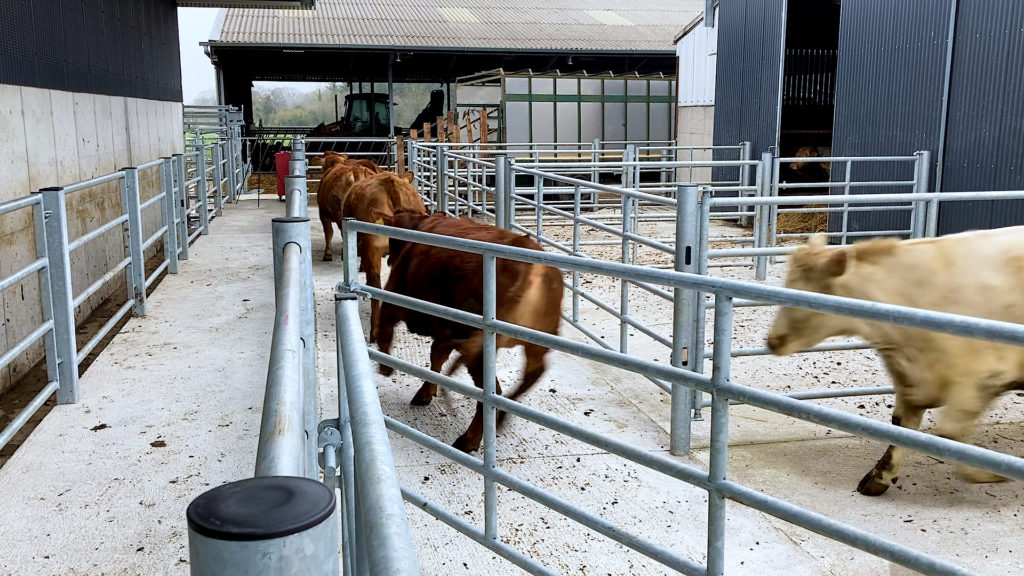 Buildings focus: A simple system made easier with the help of a 5-bay slatted shed