Boortmalt growers now know what price they will be paid for their barley for the 2019 season.

Growers will be paid a harvest price of €174/t for their brewing barley – 9.4-10.8% protein. This price was formulated from the average Free-On-Board (FOB) Creil Planet price every Wednesday over an 18-week period from week 15 (April 10) to week 38 (September 18).

The prices from each week can be seen in the table at the bottom of the article.

Farmers had the opportunity to fix the price on percentages of their contract on two occasions this season. Last September, some farmers fixed up to 20% of their contract at €230/t, while some also took a fixed price of €195/t in March when the Irish Farmers’ Association (IFA) and Bootmalt agreed on the pricing structure.

Farmers will also be paid €10/t where their barley qualified for distilling – protein content less than 9.3%. According to the original deal between Boortmalt and the IFA, the harvest price minus €10/t was also to be paid on barley which had a protein content above 10.8% – 10.9-11.8%.

However, according to reports from farmers, AgriLand understands this high protein barley was not taken at intake. Boortmalt came under severe pressure just before harvest when a steep collapsed at its Athy plant in Co. Kildare. This meant that production at the plant was dramatically reduced. 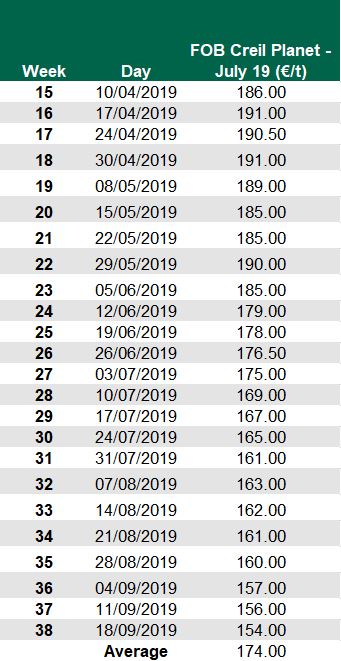 Tillage forum: Have your say in the new CAP