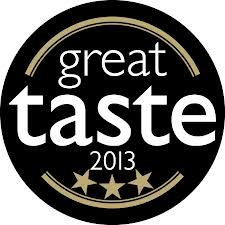 The Minister for Agriculture, Food and the Marine, Simon Coveney TD has this morning congratulated the Irish food companies in receipt of the Great Taste Awards 2013.

“They have done themselves proud. The range of foods, ingredients and beverages celebrated in these awards is impressive and demonstrates the skill and passion with which Irish food companies and producers continue to enhance our reputation for tasty food at home and on export markets worldwide,” he said.

More than 15 Irish companies were awarded three-star gold awards by the Guild of Fine Food, a prestigious international body yesterday evening. In addition, more than 50 plus Irish food firms across the island were awarded two and one gold stars. Bord Bia, the Irish Food Board, has congratulated the awards winners.

The Guild of Fine Food Great Taste Awards are internationally recognised. More than 2,100 companies across Europe entered, submitting up to 10,000 products. Only 125 producers were awarded three stars, which makes Ireland’s achievement first class.

Great Taste is the acknowledged benchmark for speciality food and drink. It has been described as the “Oscars” of the food world and the “epicurean equivalent of the Booker prize”.

According to a spokesperson for the Guild of Fine Food in a statement this afternoon: “Great taste is all about taste. It is not about packaging or smart design.  Judges are simply presented with food or drink to taste and they provide valuable feedback to thousands of producers each year.  For a producer to win a Great Taste one-star award is a great achievement, to win two-stars means that many judges have been bowled over by the product, and to win a three-star Great Taste award is comparable to a chef winning Michelin stars. It simply is seen in the world of fine food as a hallmark of taste, quality and excellence.”

Bord Bia, the Irish Food Board, congratulated the awards winners stating: “The Great Taste Awards and the invaluable recognition that comes with them supports Bord Bia’s efforts to build awareness of Irish food and drink exports in the UK, our key export market.”

Since 1994, Great Taste has been organised by The Guild of Fine Food and over the last 19 year more than 80,000 products have been blind tasted by judges including top restaurateurs, chefs, food critics, fine food retailers, buyers and cookery writers.

In 2013, producers entered just under 10,000 different products and after many weeks of intense, but enjoyable judging in Ireland, London, Hampshire, Devon and at Guild of Fine Food HQ in Dorset, stars have been awarded this week. 2524 producers were awarded one-star, 645 awarded two-star and 125 awarded three-star.

As part of the process in The Great Taste Awards, all products are judged by at least three different judging panels including fine food retailers, chefs, restaurant critics, food writers and other industry experts. All tasting is blind ensuring that the quality of taste, flavour and texture are the only criteria taken into account.

This story was updated at 15.06 with statements from Bord Bia and Great Taste 2013

This story was updated 9.35am with comments from the Minister for Agriculture on 9 August