For now, the Beef Plan Movement has suspended its nationwide rally outside meat factories – pending the outcome of high-anticipated talks yesterday, Monday, August 12.

Since the ‘ceasefire’ was agreed upon, beef processors are anxious for stock, with some slaughtering cattle on Saturday.

After 12 days and nights of protest outside 22 factories, the Beef Plan Movement and Meat Industry Ireland (MII) accepted compromise proposals put forward by the Minister for Agriculture, Food and the Marine, Michael Creed, aimed at breaking the ongoing impasse between the two parties.

These important talks took place at the Department of Agriculture’s Backweston campus in Co. Kildare this yesterday.

Now that the Beef Plan Movement’s presence has retreated from factory gates – for the moment – base quotes for steers stand at 345-350c/kg, while heifer quotes start at 355-360c/kg. However, some factories were not quoting on Monday.

However, weight restrictions are in place in some processing facilities.

Some 29,138 head of cattle were slaughtered in Department of Agriculture approved beef export plants during the week ending August 4 – the week the Beef Plan Movement began its protests at a number of factories throughout the country.

The number of young bulls bought by beef processors fell by 387 head, while the number of aged bulls decreased by 89 head. 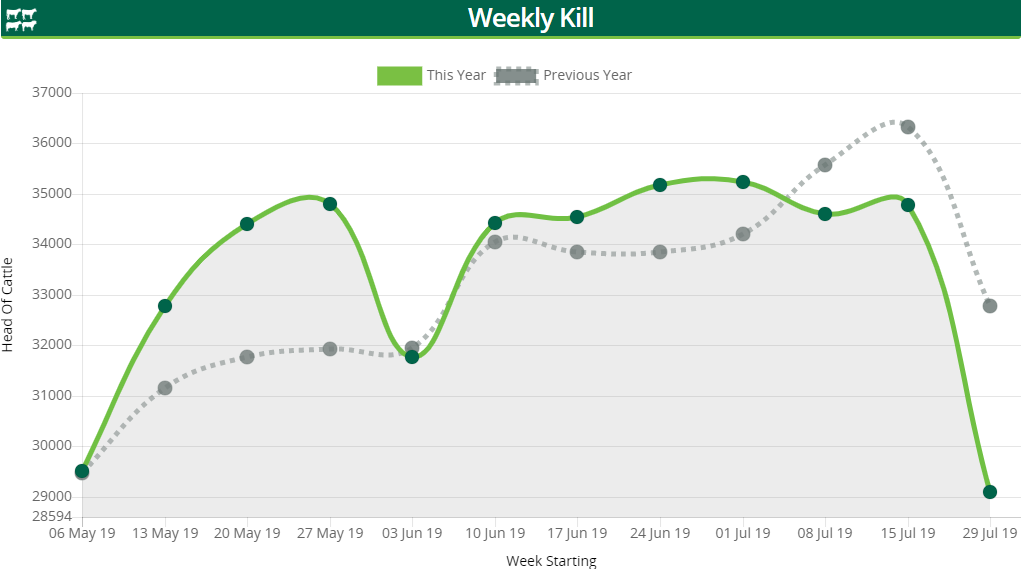 The number of steers presented for sale decreased by 1,940 head on the previous week. Cow numbers fell by 1,975 head and the number of heifers slaughtered dropped by 1,482 head.

Last week’s figures were unavailable at the time of writing, however these will be available on AgriLand on Wednesday, August 14; last week’s kill is expected to be well back on previous weeks.

According to Bord Bia, prices for R3 steers were in Great Britain – for week ending August 4 remained the same at 333p/kg or 359c/kg.

Moreover, there was a 2c/kg recovery in the price quoted that week for R3 young bulls in France – 373c/kg, while O3 cows remained the same at 321c/kg.