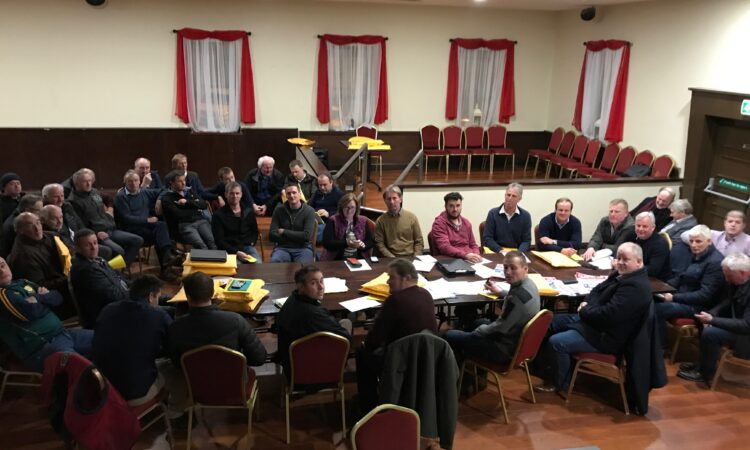 A large group of beef producers gathered around a table in Tullamore, Co. Offaly last night (Thursday, November 1) with one mission in mind – empowering farmers to demand a better price.

Around 40 farmers – from all over the country – attended the Beef Plan 2018-2025 Group meeting at The Townhouse Restaurant where the recently formed group – which now claims to have up to 3,000 members – voted to appoint a number of key representatives – including: a chairperson; a vice chairperson; a secretary; a treasurer; and a PR representative.

The authors of the ‘Beef Plan 2018-2025’ – understood to be an entity of farmers that are largely, but not exclusively, members of the Irish Farmers’ Association (IFA) – claim their blueprint could well be “the last chance for the suckler and beef farmers of this country”. 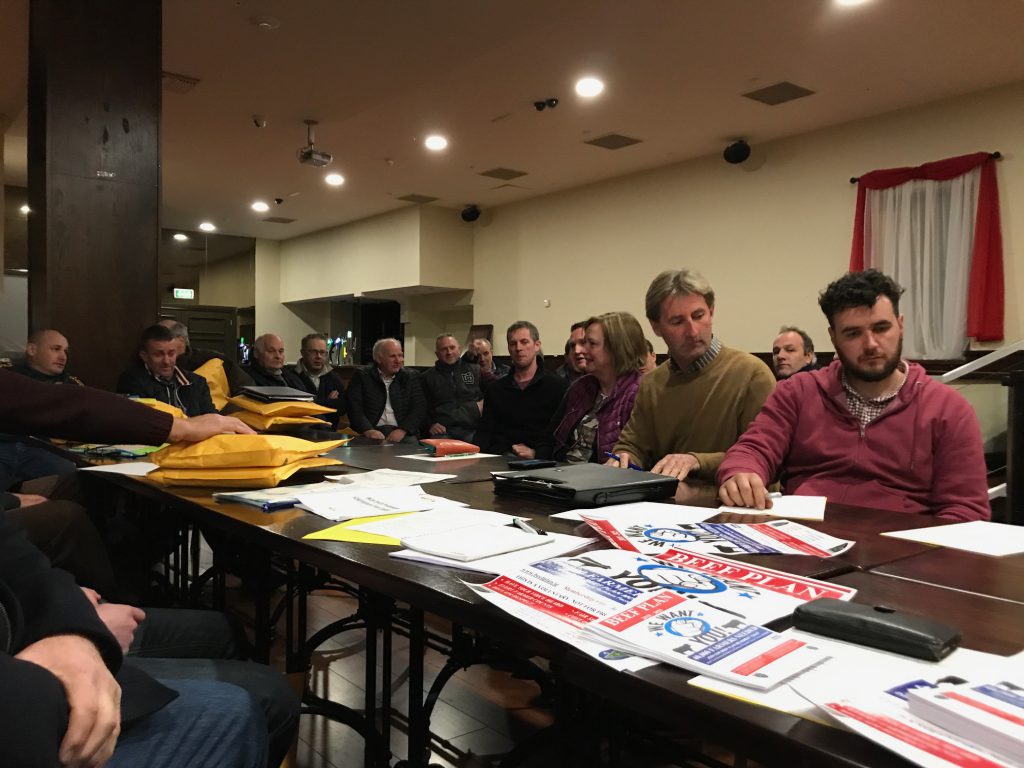 The group – which has received words of support from the Irish Charolais Cattle Society, a number of marts, the Irish Cattle Sheep Farmers’ Association (ICSA), plus a number of high-profile agricultural politicians – needs at least 40,000 beef farmers to row in behind its proposals.

New members are being asked to contribute €10 towards the development of the entity.

Last night, AgriLand spoke to a number of beef farmers after the meeting to ask their thoughts on why they have joined the new entity.

Declan (37) owns a small holding in Claremorris, Co. Mayo, where he runs a suckler enterprise and fattens heifers.

The newly-appointed national secretary for the group, and chairman for the Connacht province – who also works full time in IT – says he has “chopped and changed” over the years to try to find a way to make his farm sustainable and profitable. 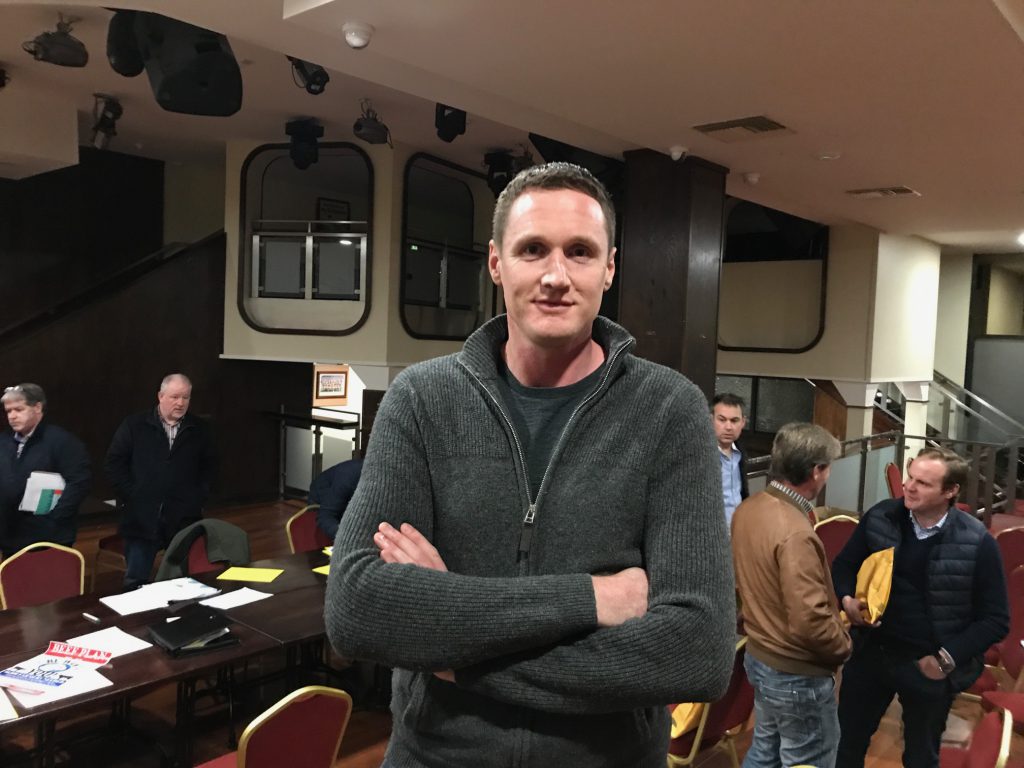 “I’ve gone from suckler cows, to fattening heifers and store heifers, back to suckler cows – and I haven’t been able to find something that is going to generate enough revenue to keep the farm going.

“I took over the farm in 2015. I’ve put a lot of money into the farm over the last three years through capital investment, but at the moment I am just trying to keep the cost of the loans covered – it’s that tight.

Declan, who first heard about the new group on messaging service What’s App, fears that without a plan, the “whole future of the beef sector is in serious trouble”.

I’m here because Mayo is quite a big county with between 10,000 and 12,000 beef farmers – which is 60% of farmers in the west of Ireland – so this plan is hugely important to Mayo.

“If you look at the Teagasc National Farm Survey in 2017, only a third of farms in the west of Ireland are viable, so that is a problem and a lot of the issue is based around beef.

“Mayo is a county full of a lot of marginal land, small farms and broken-up farms. It’s not suitable for dairying, the vast, vast majority of farmers can’t grow tillage, so they either have sucklers or another form of beef, or they have sheep.

“I have a farm that was passed on to me by my father and I really want there to be a farm left in 20 years so when my son grows up I can pass it on to him.

“As soon as I saw the Beef Plan I knew this is exactly what we needed and I got 100% behind it,” said Declan.

For Declan, the key part of the plan is to get a cost-of-production price.

“That is crucial. I got to the marts every week and the amount of weanlings going through the mart between €400 and €700 is crazy.

“If you talk to Teagasc, they say the average cost of rearing a calf to weanling stage is about €700, so the amount farmers that are losing every week is insane,” he said.

25-year-old Philip, who has been farming his own 46ac suckler farm in Ballintubber, Co. Roscommon for the last five years, first heard about the Beef Plan Group on Facebook.

Philip, who also works off-farm on a part-time basis, is one of three farmers that heading up the group in his native county. 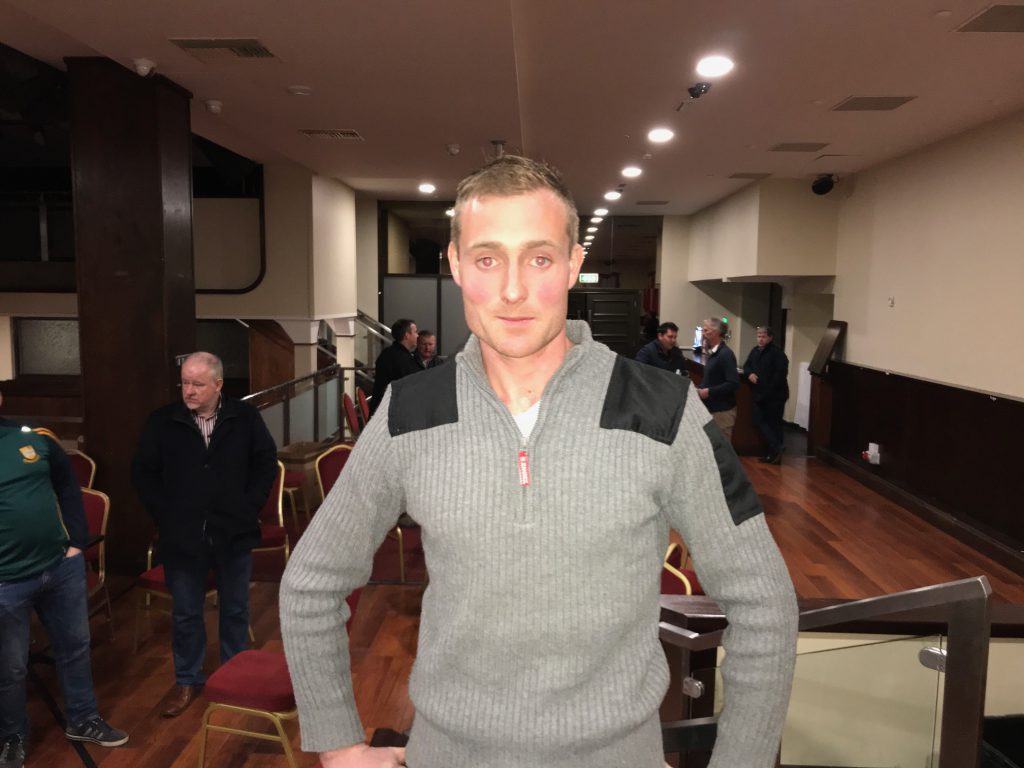 “Basically I’m here because beef farmers have no control. We have no power and something has to be done.

“We are fed up to the teeth about it. It’s too much red tape and that is bottom line. Why don’t factories and retailers work with the farmer, instead of coming down on them the whole time.

“The big fella is going to get bigger and the small farmer will be pushed out and that will be it – it’s clear as day. That’s the bottom line and that’s why I’m here.

“The next part for us is to get everyone else signed up and get them involved; it’s snowball effect,” he said.

Philip says he has never been involved in farm politics.

I don’t get involved in farm politics because there is too much cronyism and that is the bottom line.

“What you have here is a group that represents the small rural farmer – the  person who had no say; the person that has never had a say.

“We’re not trying to go against the farm organisations, we’re trying to bring everyone together. There are people out there losing their houses over what is going on at the moment.

Pat, from Virginia, Co. Cavan, buys in two-year-old animals and finishes them off under 30 months.

He also heard about the group on social media and was instantly interested.

“Basically, the representation out there for farmers is zero – there is just no-one out there anymore that really gives a hoot about the farmer. 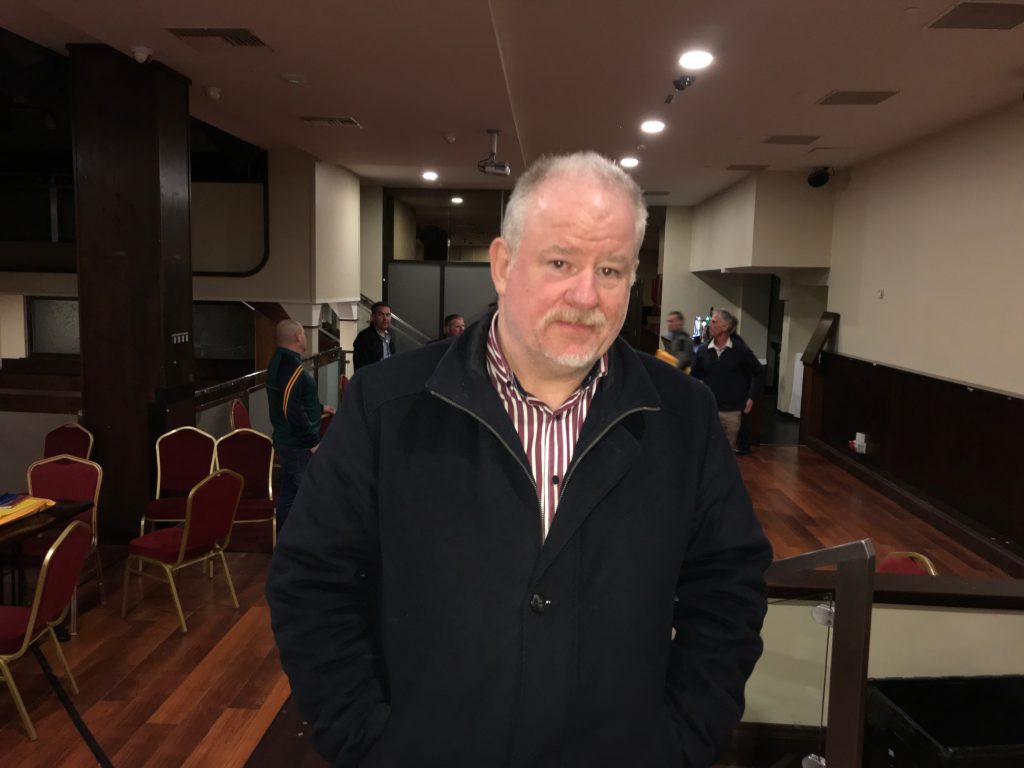 “They are all interested in other areas and it is a money grabbing thing. This is a voluntary group; it is a not-for-profit organisation and it’s through frustration that all this has come about – frustration from farmers.

Price is diabolical. I don’t know how they farmers can survive on the money they are paying at the moment it is ridiculous, it is not possible. All I can see is framers getting into bigger debt.

“Farms in a year or two will be sold and obviously these bigger players will take over farms. What I can also see, which I don’t like, is these feedlots getting bigger and farmers getting smaller.

“With the fodder crisis, greedy factories came along, saw an opportunity and they took it. You wouldn’t see it in any other business,” he said.

Pat, who has also never previously been involved in farm politics, described the group as a “no brainer”.

“We need to get going and get these proposals out there and implemented as soon as possible. Time isn’t on our side; it needs to be done fairly quick,” he said.

Enda is a suckler farmer who also buys 20 dairy heifers every year in Ratheniska, Co. Laois.

“The prices don’t stack up. I thought this group might be a way to put pressure on factories and retailers.

“I want to see fairness come back. Farming is the only business where all inputs go up annually; but the price of the product goes down. 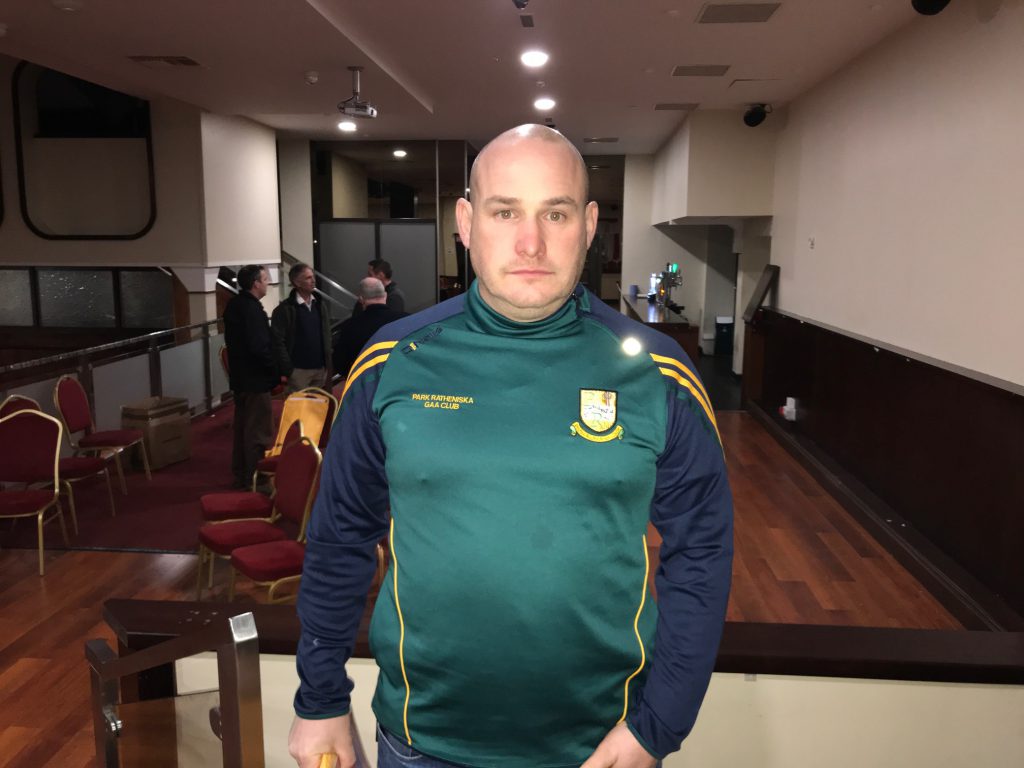 “The deck is set against farmers. We are price takers not price makers,” said Enda who is involved on the Laois co-ordination side.

The father-of-four who farms on 95ac wants to ensure his farm remains viable for his four sons.

You can talk about Brexit all you want; but we’re being screwed in Ireland by Irish companies.

“Government policy is to drive dairy; but we can’t all be dairy farmers,” he said.

Jim recently took over a 40ac suckler holding from his father in Quilty, Co, Clare. 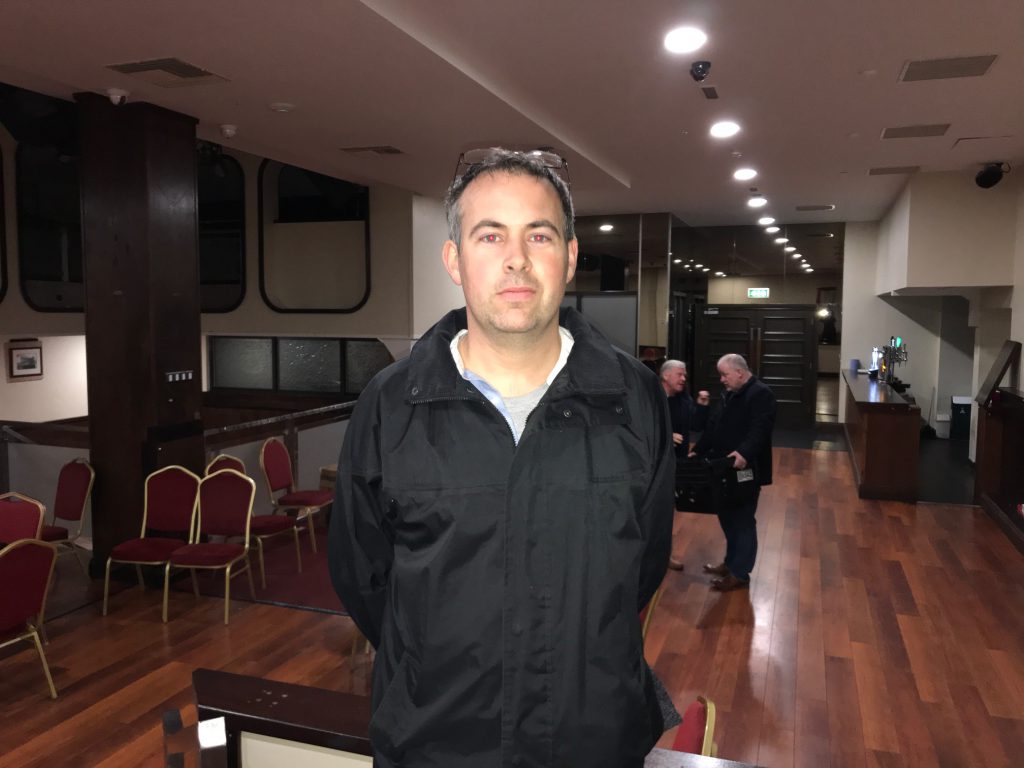 “It’s difficult no matter where you are – east or west. I joined this group because it’s about farmers moving together for a greater good.

The new group representative for Co.Clare says he is confident that membership numbers will “rise rapidly”.

Meath beef farmer and spokesman for the Beef Plan Group, Eamon Corley, said he was “very happy” with the turnout at last night’s meeting.

“We’re pushing as hard as we can. Posters are going up in every mart and a lot of marts have agreed to send out flyers with the cheques to get directly to people. 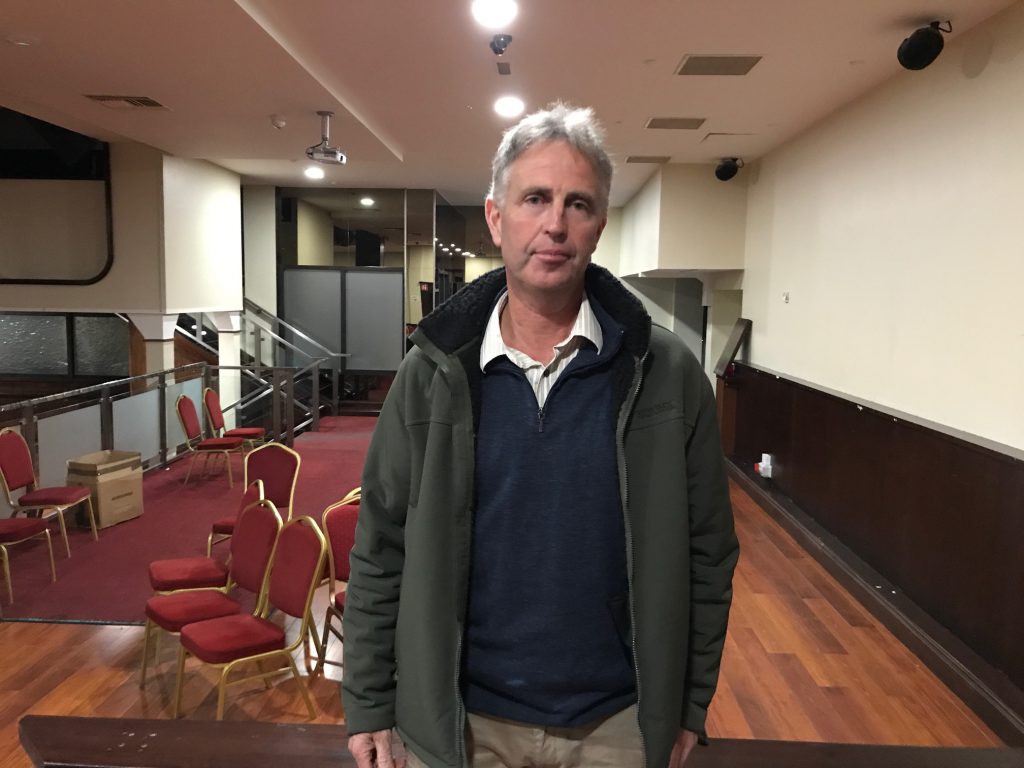 “Some of our members will be speaking during peak mart times at Kilkenny Mart and Elfin Mart in the coming weeks to motivate farmers to get behind the plan.

“Then we will hold county meetings in each county and hit the local media outlets,” he said.

Corley said he is also encouraged by the gestures of support the group has received from the Irish Charolais Cattle Society and the ICSA.

However, the current livestock chair of Meath IFA, remains uncertain as to whether the IFA will also back its proposals. 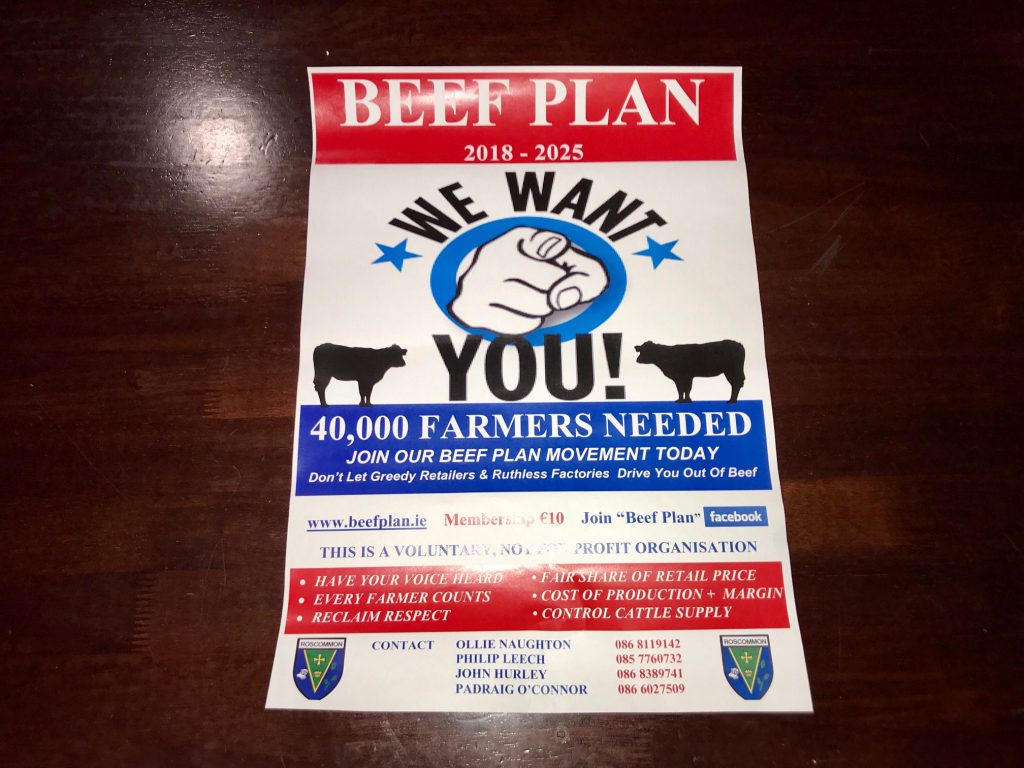 “The situation with the IFA is we honestly believe they’re trying to push us under the carpet. We have given them five weeks to say whether they support it with no strings attached; but we’ve heard nothing back yet.

“We’re moving on without them at this point. It’s our plan and we’re going to implement it,” said Corley adding that the group will also soon meet with Sean Kelly MEP for Ireland-South and Matt Carthy MEP for Midlands-North and West.

Members of the Beef Plan Group will also reach out to farmers at Roscommon Mart next Wednesday, November 7, at 8:30pm.