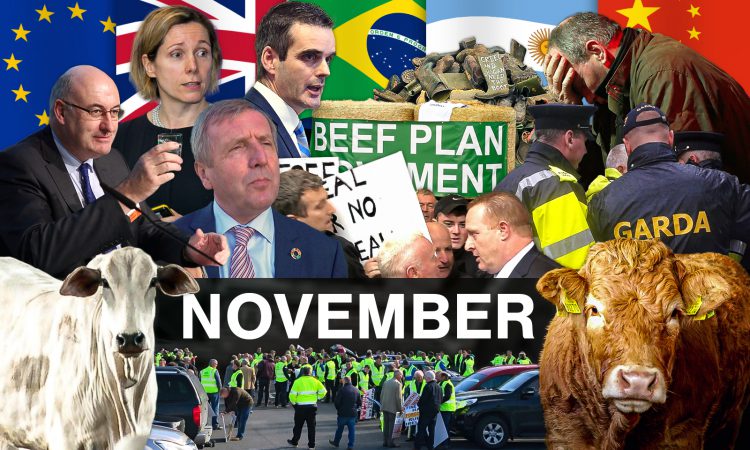 They haven’t gone away you know…

Another month, another protest. On the first day of November, a group of around 25 protesters landed outside Bord Bia headquarters on Mount Street Lower, in Dublin.

Bord Bia were nonplussed by their cause however, insisting that the Irish Food Board has “no role” in setting the requirements of the QPS, and reiterating its role in promoting Irish food internationally.

This role was accentuated in earnest a few days later when – in a much-desired development – Bord Bia stated that Irish beef exports to China are expected to grow to €120 million (25,000-30,000t) through 2020.

This seismic export boost regrettably comes on the back of China’s African swine fever (ASF) misery, however, for the first time in months, some positivity was injected into the sector. 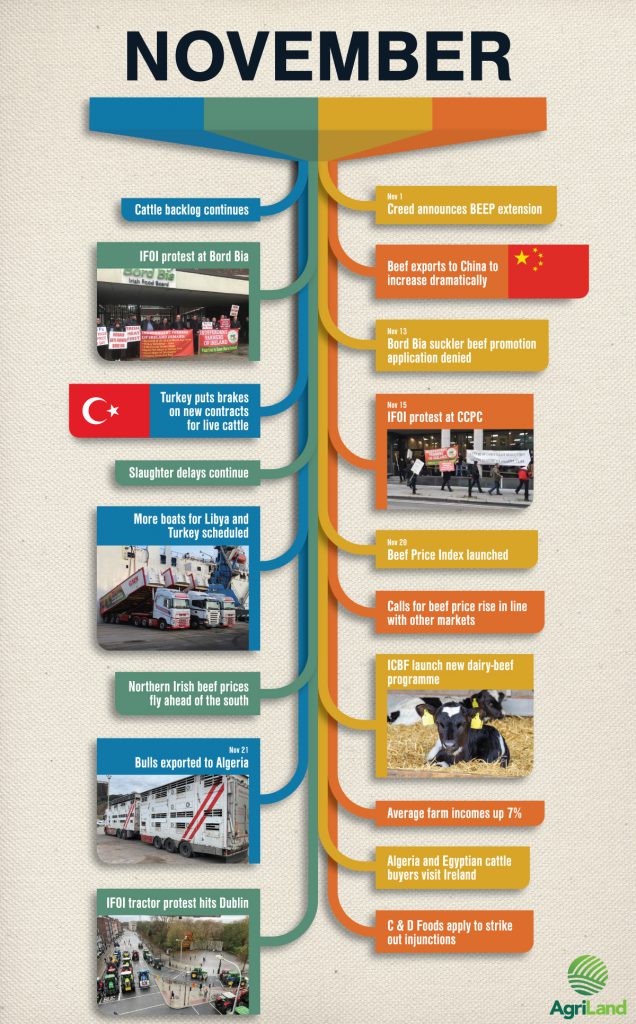 On the ground factories continued to work through the backlog.

It emerged that Bord Bia was unsuccessful in its application to the European Commission seeking a fund of €3 million to promote Irish suckler beef in Europe.

Not one to sit on its laurels, the IFOI were back on the streets of the capital, this time outside the Competition and Consumer Protection Commission (CCPC).

Again, around 30 demonstrators picketed. Their gripe: “how the commission’s inaction has enabled the creation of a cartel in the beef sector.”

By mid-month the potential of China seemed little more than fortune cookie wisdom, as farmer frustration continued to mount over chronic delays in getting cattle booked for slaughter, resulting in stock going overage and ‘out of spec’.

Farmers demanded a base price increase; but factories barely batted an eyelid and seemed happy enough to work away at the current slaughtering capacity – giving priority to under 30-month steers and heifers.

Living up to its side of the beef agreement, Bord Bia launched its new Beef Price Index that allows cattle price comparisons to be drawn between Irish prices and those in corresponding international markets.

Other global meat price markets started to surge ahead of Ireland, but on the factory floor the message was: “nothing to see here”.

After truckloads of Irish bulls successfully arrived in Algeria for the first time in some years, live exporters from the country, alongside Egyptian buyers, landed in Ireland to strengthen future relations.

On Tuesday, November 26, around 60 tractors, dozens of trailers and 4X4s, and an estimated 450 farmers neatly parked up outside Dublin’s luxurious five-star Shelbourne Hotel on St. Stephen’s Green.

Their goal: to deliver letters to the house around the corner – Agriculture House that is.

Their demands: for outstanding summer protest injunctions (related to C & D Foods) to be lifted and for action to be taken to save family-sized beef farms.

48 hours later, having rattled the floors of Leinster House – and the ABP Group – C & D Foods applied to have its injunctions, which it secured against two individuals earlier this year, to be struck out.

Dublin appears to be the place to do business… 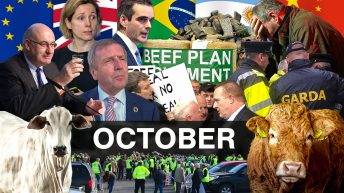