In September of this year, the Skidoo female pedigree Charolais cattle went under the hammer.

Prior to the sale, we caught up with farm manager, Donal Callery and his three-man team, to chat about the history of the Skidoo herd and what lies ahead for the Dublin-based farm.

The Skidoo farm needs no introduction as it will be known in almost all farming circles – both at national and international level.

The Skidoo herd originates all the way back to 1966, when the farm owner at the time – Omer Van Landeghem – introduced some of the first Charolais cattle onto the island of Ireland.

This did not just happen overnight, and after eight years of striving, Van Landeghem succeeded in his quest to bring Charolais cattle to north Co. Dublin.

In 1966, the Charolais heifers and bulls from France were quarantined on Spike Island in Cork Harbour, before arriving at their new home.

He continued to build up the herd here in Ireland, with famous sires such as: Shamrock Ambassador; Uranus; Emperor; Commander; and Flambeau. Other bulls such as Skidoo Champion and Skidoo Pacha are still popular among farmers today.

In 1995, Van Landeghem passed away and the farm and the herd were sold to local farmer and business professional, Pat McDonagh.

However, the Charolais breed and history was maintained on the farm, and in 2010, the reins of the farm were taken by Cavan man, Donal Callery. 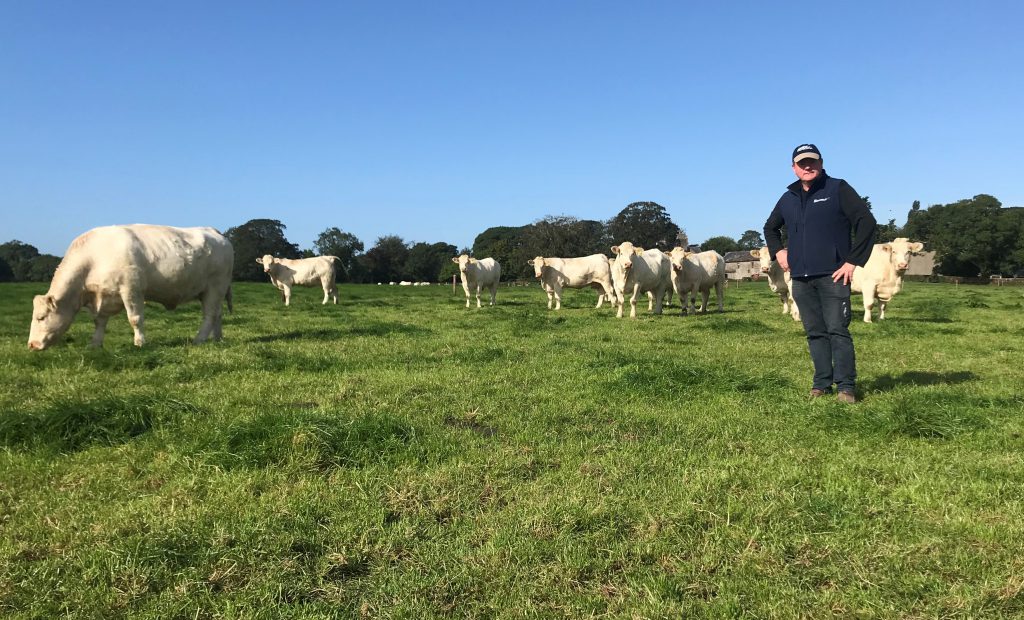 Today, both the 100-cow Charolais pedigree herd – and the 160-cow commercial herd – are managed by Donal and his three-man team: assistant manager, Gerard Friel; stockman, Stephen Patton; and maintenance man, Anthony McDonagh. A tillage enterprise is also present on the farm.

“The main focus and the main traits that Skidoo chased and always had was number one – easy calving, and number two – milky cows,” Donal explained, when describing the backbone of the herd.

“I’m here 10 years and what we focused on was cow functionality – a cow that could rear a calf herself. She has to have milk; she has to be fertile; and she has to have a calf every 365 days, along with sound feet and legs.”

The pedigree herd is split calving – 50% spring and 50% autumn, while 60% of the commercial herd calves in the springtime, with the remaining 40% calving in the autumn. 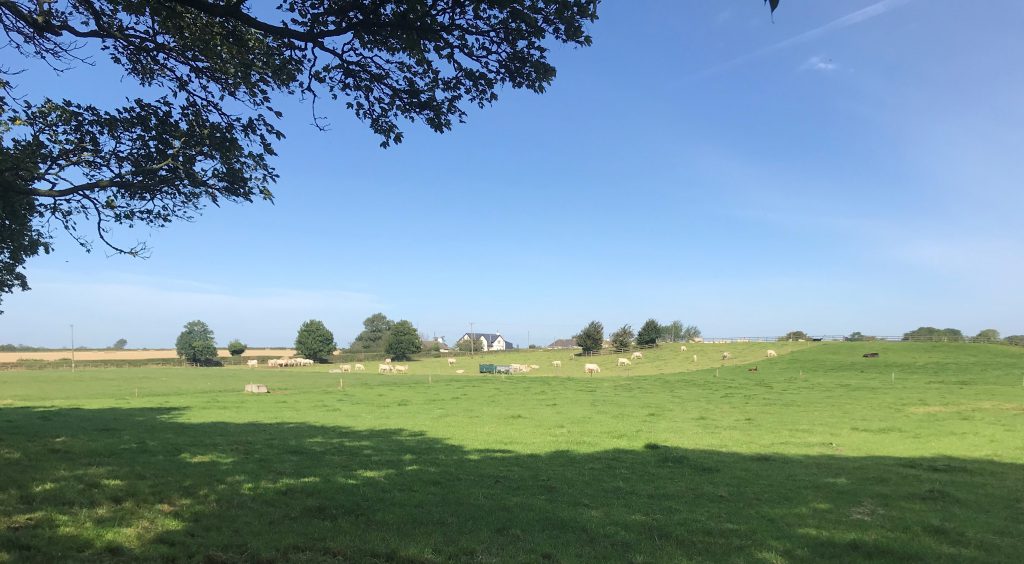 Up until this year, approximately 45 pedigree bulls were sold each year for breeding – direct off-farm – along with breeding heifers after replacements had been chosen – keeping to the tune of a closed herd with optimum herd health status.

“Herd health is paramount in relation to bio-security, and we have a strict vaccination programme in place. Also, the farm is surrounded by tillage fields and a closed herd has been maintained for many years,” Donal added.

Heifers from the commercial herd are finished on the farm aged 24 months, while bulls are sold at 12 months-of-age – weighing 500kg – for the under-16 month bull finishing market. The breeds used in the commercial herd include: Simmental; Limousin; and Charolais.

However, the decision, a move which Donal admits wasn’t an easy one, was made last year – a switch from beef to dairy production. 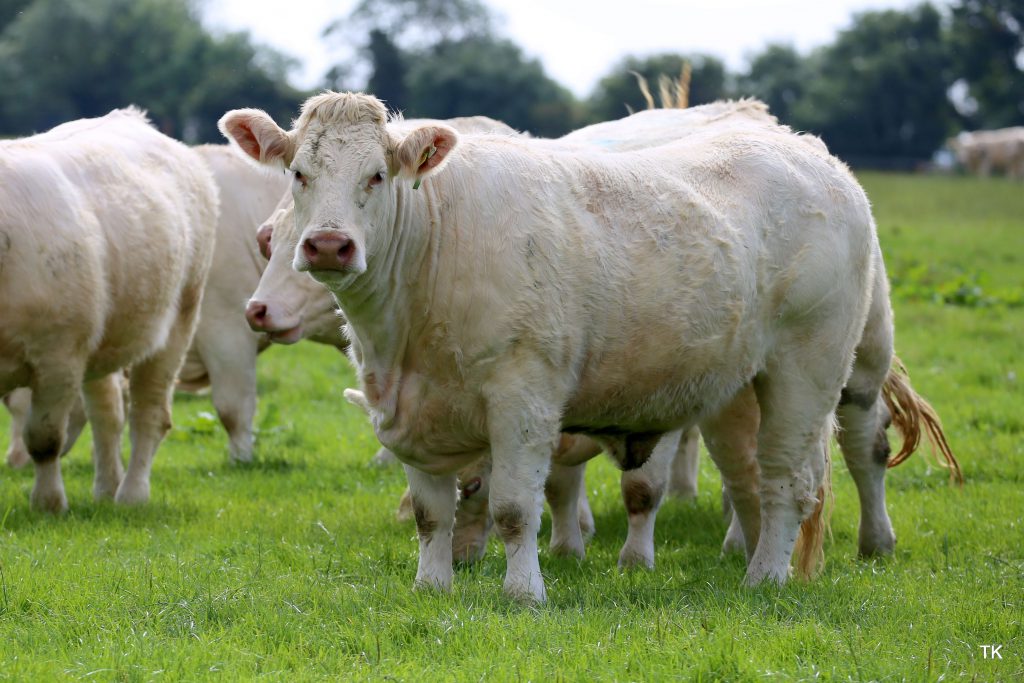 For the time being, the commercial herd (60% AI and 40% stock bulls) will be kept on the farm.

When it comes to selecting bulls and sires, criteria was very much based around maternal traits, with the aim of building an elite-cow herd.

“We wanted bulls that would be easy calving, high in fertility, and that were going to retain milk in the females,” Donal explained.

“We were breeding an animal that was early maturing – that’s what the market requires; those big carcasses are finished. All our cows are medium sized, with high traits for milk, fertility, carcass and conformation.”

The herd is involved in the Beef Data and Genomics Programme (BDGP) and Donal is a fan of the programme.

“All the females here are genomically tested and that’s fantastic,” he added.

In 2018, 300 cows were calved down, so having an easy-calving system was paramount to the system.

Pedigree heifers calve aged two and a half, while 50% of the commercial heifers (spring calvers) are calved at 24 months and the remaining 50% are calved at 30 months (autumn calvers). 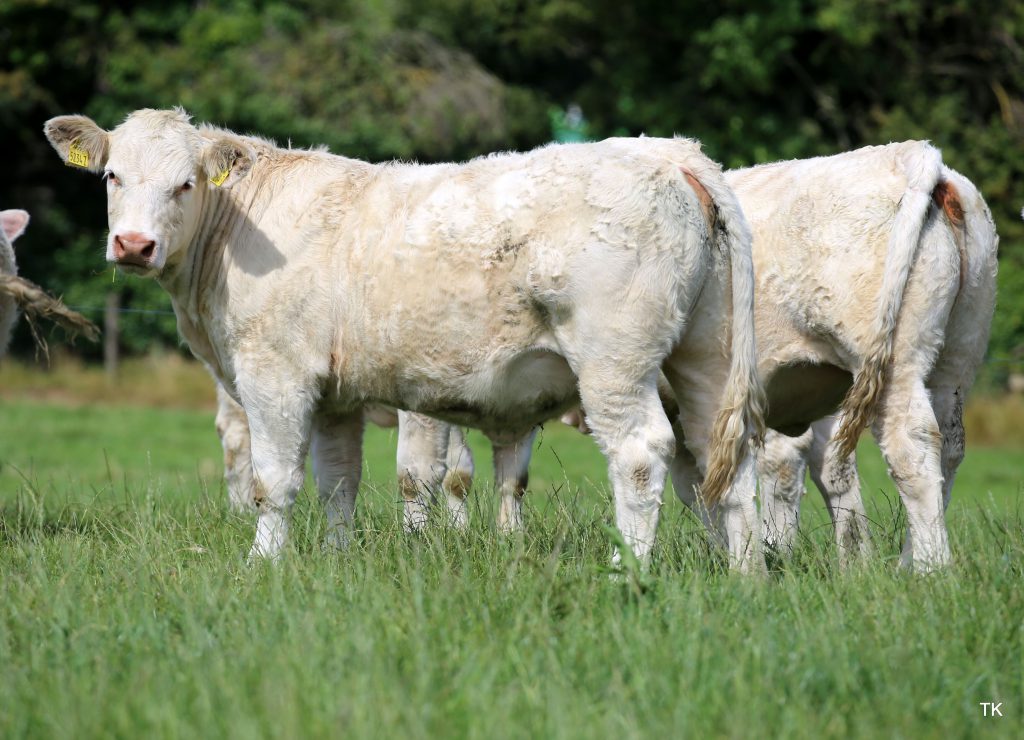 The breeding season for the autumn-calving cows starts on December 1, and finishes on February 1 – a strict eight-week breeding period.

The breeding period for the spring-calving herd commences on May 1 and continues until July 12. Additionally, all going to plan, weanlings are turned out to grass in early February.

The farm is described as extremely dry and Donal outlined that – in a normal year – cattle could be out grazing for 10 months of the year.

Therefore, grass is the main constituent in the diet, with calves only receiving meal six weeks pre-weaning and during the indoor period (2kg/head/day).

“We’re not selling any bulls at the moment because of the size of the sale, so we intend to have another sale for male animals in February next year,” Donal said. 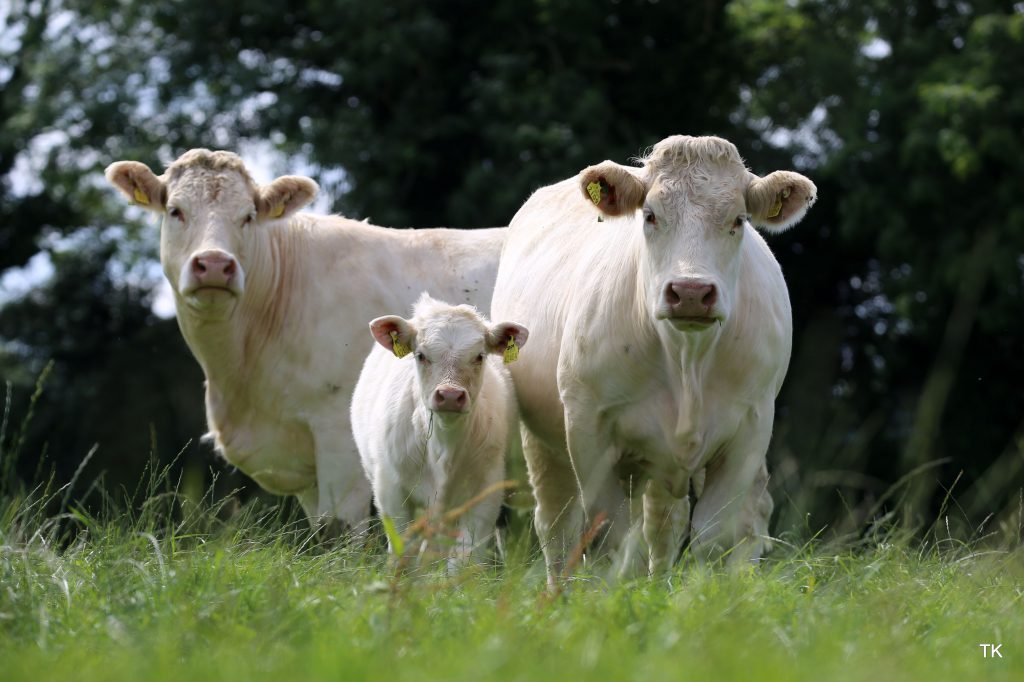 “Our foundation cows are cows that are going back to the likes of: Bowerhouses Topper; Oldstone Egbert; Jupiter; Domino; Major – all the top female bloodlines; we have them.

“The sires that are working very well at the moment are: Tombapic; Jumper, Nelson; Pirate; Doonally New – CF52 (terminal traits); Bivouac; and Bourgogne – there’s a whole array of them that we used,” the Cavan man explained.

So, what’s next for Skidoo?

Wheels are already in motion for the next chapter on the Skidoo farm. In spring 2021, approximately 300 ‘black and white’ cows will enter into a new rotary parlour.

The overall target for the new dairy farm is 400 cows. While Donal is looking forward to this endeavor, he has not taken the decision lightly.

“For this farm, beef farming at this stage is not justifiable as we pay staff because it’s 100% hired labour. 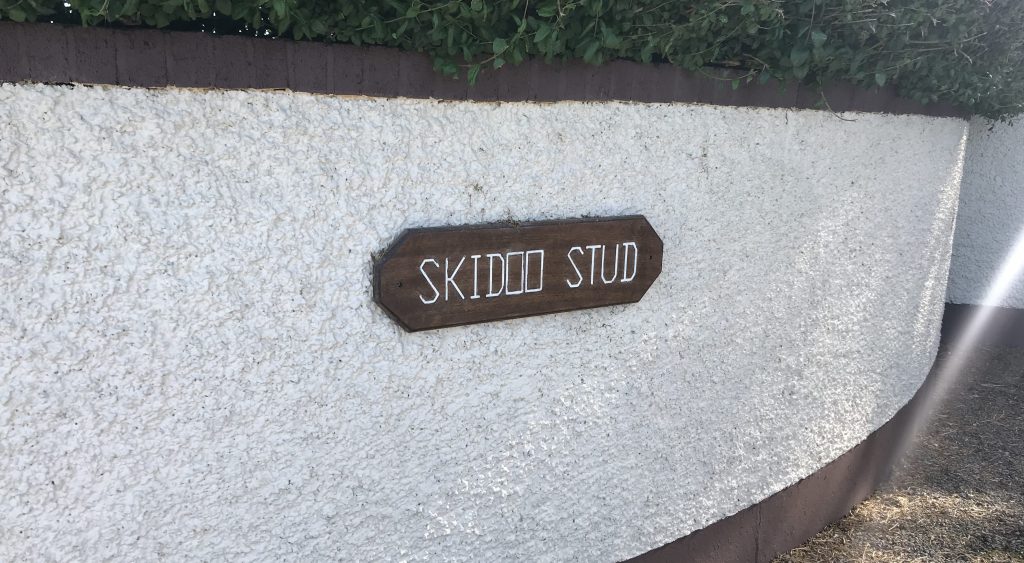 “Saying that, I went into beef, and enjoyed beef; beef farming has been very good to me. I really enjoyed it but I always had the liking for dairy.

“To be honest, to disperse the pedigree Charolais herd here, you’re talking about genetics going back to 1966 – the first Charolais genetics that was introduced to Ireland; there was a lot of work put into breeding.

“We have built up a herd that’s not alone known nationally, but internationally as well. It was a big decision that the pedigree Charolais herd has to go.

“It was a thing that was not taken lightly, and it was a big decision to go away from beef farming; but for the moment, we are still retaining the commercial herd to see how things pan out,” Donal explained.

Infrastructure on the farm is excellent and only minor adjustments have to be made to facilitate the new breed of cows, with the exception of the rotary parlour. 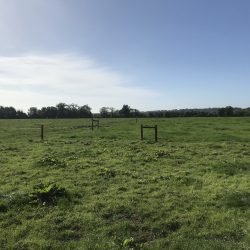 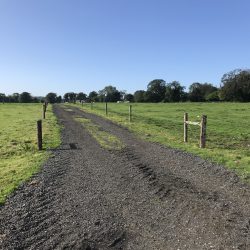 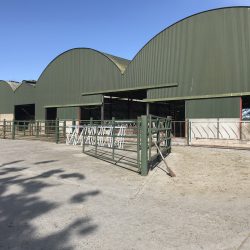 Winter accommodation is adequate, and cubicles will be installed in the near future.

Since taking over the managerial reins in 2010, Donal and his team have implemented a paddock and water system, and installed a road network throughout the holding.

Grass management, grass measuring and AI are all familiar practices on the farm, so there will be nothing new for the team to grasp on that front.

“We were already doing a lot of things that the dairy man does with the beef herd – grass measuring, heat detection and AI; Stephen and Gerard look after the AI department, so we’re up to speed there. 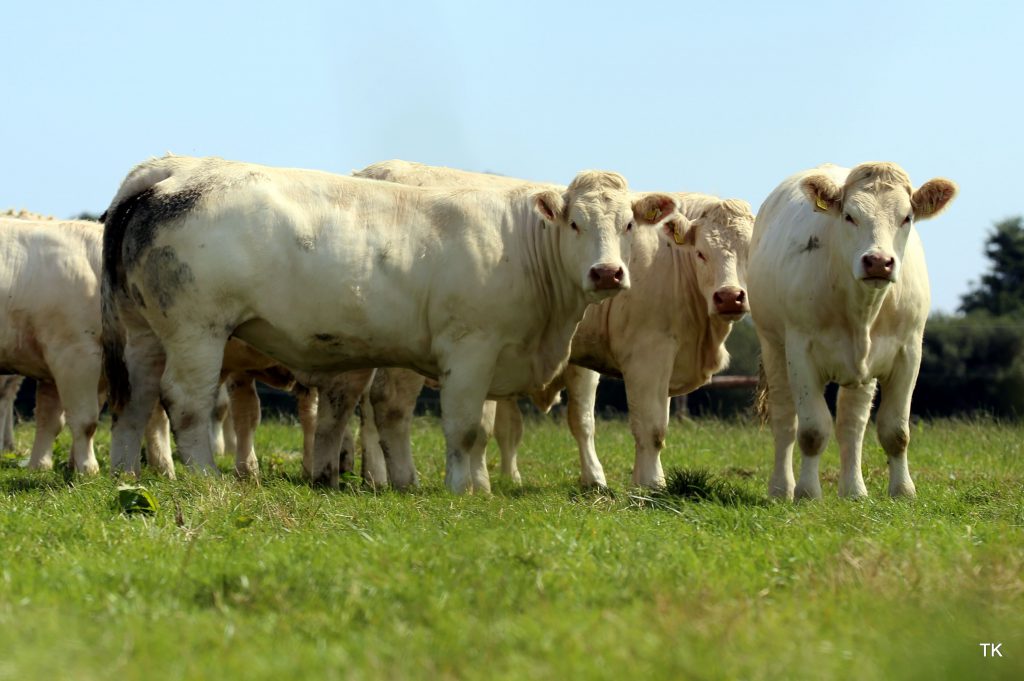 Concluding, Donal said: “I’m very keen on the dairying. Once we made up our minds, we were very happy to go down that road.

“It will be a sad, sad day to see the herd dispersed, but I have no doubt that the Skidoo name will live on because people will buy the genetics here and will have them for years to come.”