Limousin, Simmental and Charolais cross cows are the backbone of the commercial operation and all offspring are sold as weanlings, while the pedigree Charolais progeny are sold for breeding.

Christy began farming at a young age and bought his first Charolais calf at the age of six; this was to be the foundation that led the Kilkenny-based farmer to where he is today.

However, Christy has become increasingly worried and somewhat unhappy with the beef industry in Ireland and warns that if something is not done in the near future, the outcome will be very grim for suckler farmers.

“I’m after putting my life into this and I’d like to see my children keep it going; if something doesn’t change, we’re going to be pushed out completely,” he explained. 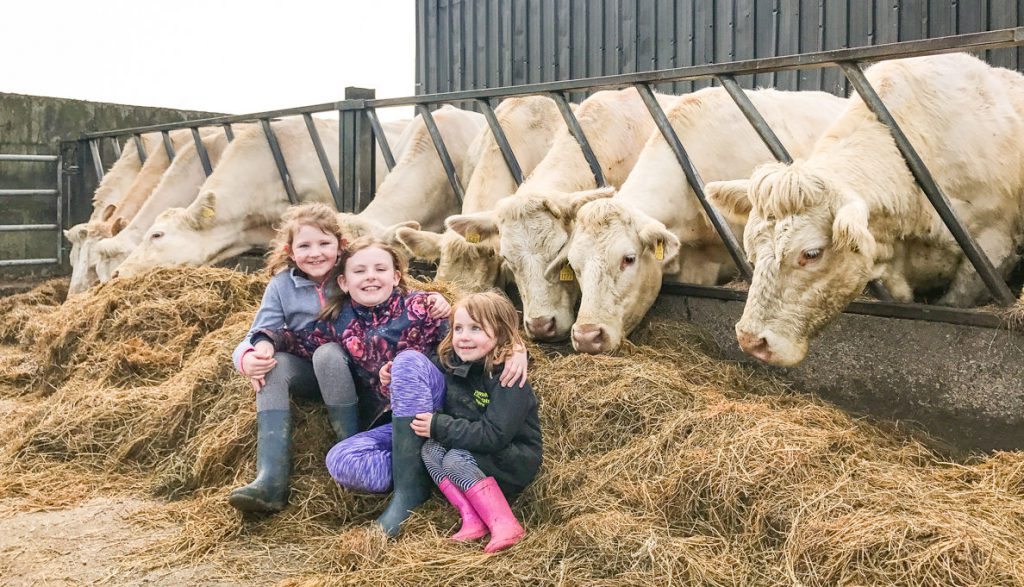 Christy’s daughters Cynthia, Colette and Christine pictured with some of the Charolais cattle

The BDGP is an agricultural scheme which was launched by the Department of Agriculture in May 2015. The scheme, which will run until 2020, is designed to improve the genetic merit of the suckler herds and reduce greenhouse gas emissions from the Irish beef herd.

However, Christy is of the opinion that the scheme – which was implemented to tackle climate change – does not make sense and, in fact, is creating more greenhouse gas emissions.

On this, he said: “There has been a seriously good job done when it comes to breeding cattle in this country over the past 40 or 50 years.

“I’ve no bother giving information on the breeding front and I would like things to move in a positive direction when it comes to breeding cattle in Ireland.

“However, tieing a scheme to a star rating was not the right thing to do. The star rating is only meant to be a guide for a farmer; it shouldn’t be gospel.”

The Kilkenny native highlighted that breeding the traditional suckler cow – that was bred for the last 40 years – was the way to tackle greenhouse emissions.

“Farmers could produce an animal from these cows that would come in at 16 months and turn into a 420kg carcass. 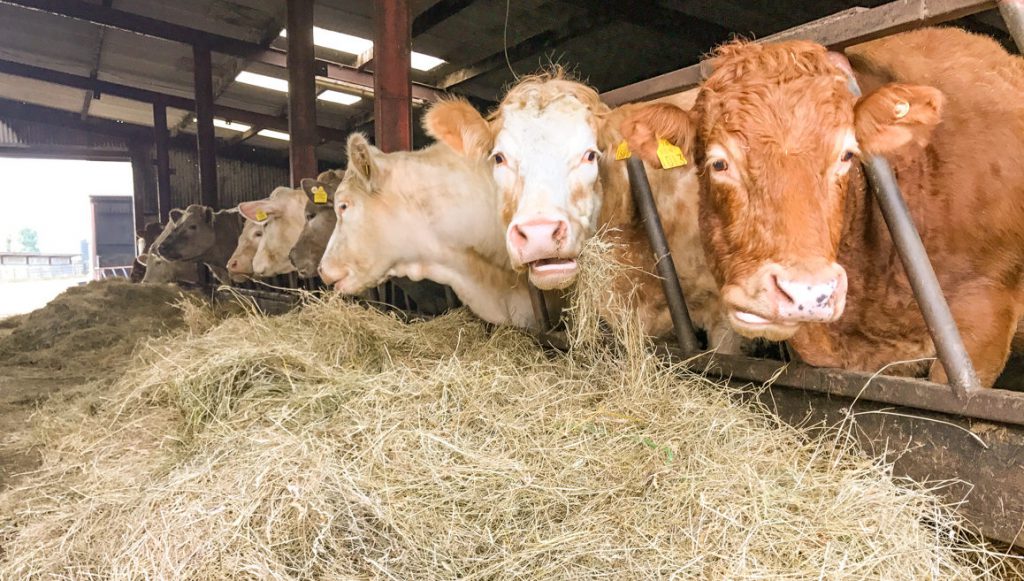 “The animals coming from the dairy herd at the moment are averaging 312kg (deadweight) and are aged 29 months at slaughter; they would nearly know you by name because they would be on the farm for so long,” Christy added.

“The real good traditional suckler cows were the backbone of the beef industry in this country. They were sought after everywhere; other countries sourced heifers from the west of Ireland and they were super animals.

“To turn our backs on something that was done for years and go down the road that we are going now is scandalous. I can’t understand why the government are not stepping in to do something about it,” he explained.

Touching on star ratings, Christy said: “If a young lad came to me today and wanted to buy a 5-star heifer, I wouldn’t sell her because in three months time, she might have a 3-star rating; I couldn’t take the money.

There is no doubt that Christy is passionate when it comes to beef farming and it is quite evident from the quality of the stock on the farm that no corners are cut when it comes to management.

Speaking on the possibility of breeding beef progeny from the dairy herd, he said: “If we start breeding animals from the dairy cows, we will be breeding from a less fertile cow as AI will be used in order to get replacement heifer calves.

“A beef bull will then clean up on the less fertile cows and, therefore, an infertile animal will enter the suckler herd. 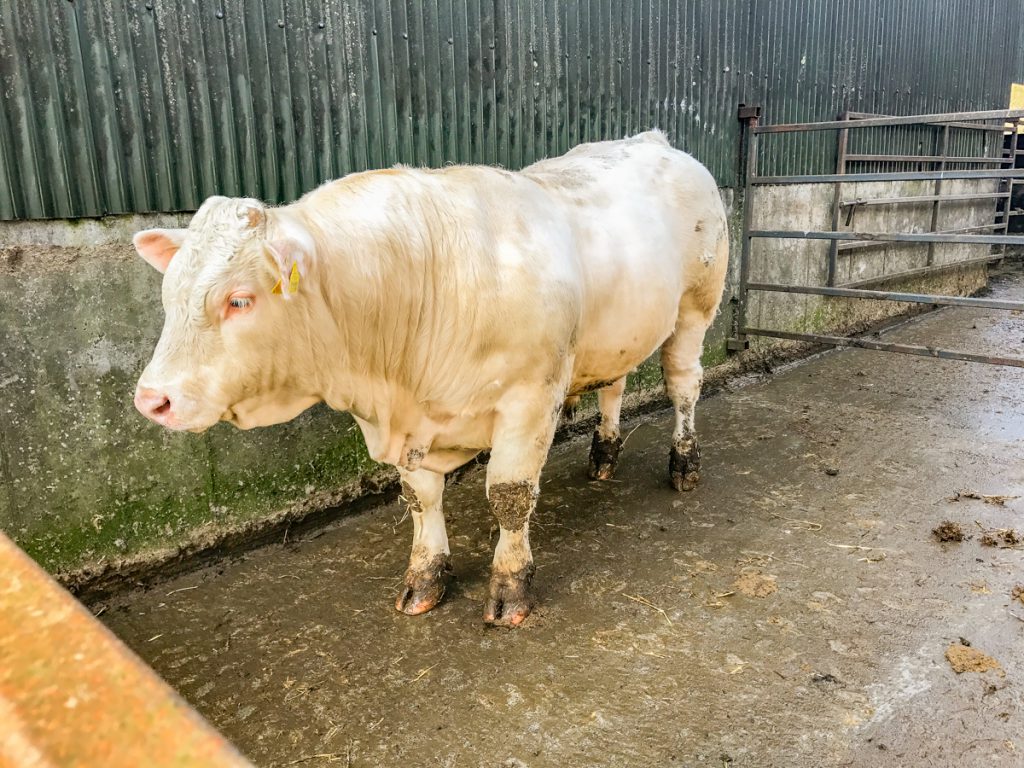 “That is not the way forward in my eyes. We’re an escape route for the government which does not want to be seen putting down calves from the dairy herd.

“It’s like, if they can push the suckler man out of business, he can rear these calves. That is a non-runner in my eyes,” he explained.

“The type of cow that is being promoted nowadays isn’t sustainable for the suckler man. We need proper square cows that are capable of being bred to good beef bulls; a mouse won’t have a rat,” he added.

Christy continued by highlighting the fact that we live in the best country in the world to produce quality, grass-fed beef, which comes from suckler cows rearing calves naturally.

He also commented on the lack of antibiotics used in comparison to other enterprises. On this, he said: “It is predicted that 14,000 extra people are going to die over the next two decades due to cancer.

“We rear smashing beef animals with little or no antibiotics. There’s no comparison between a calf that is reared on milk replacer and one that is reared off their mother’s milk.” 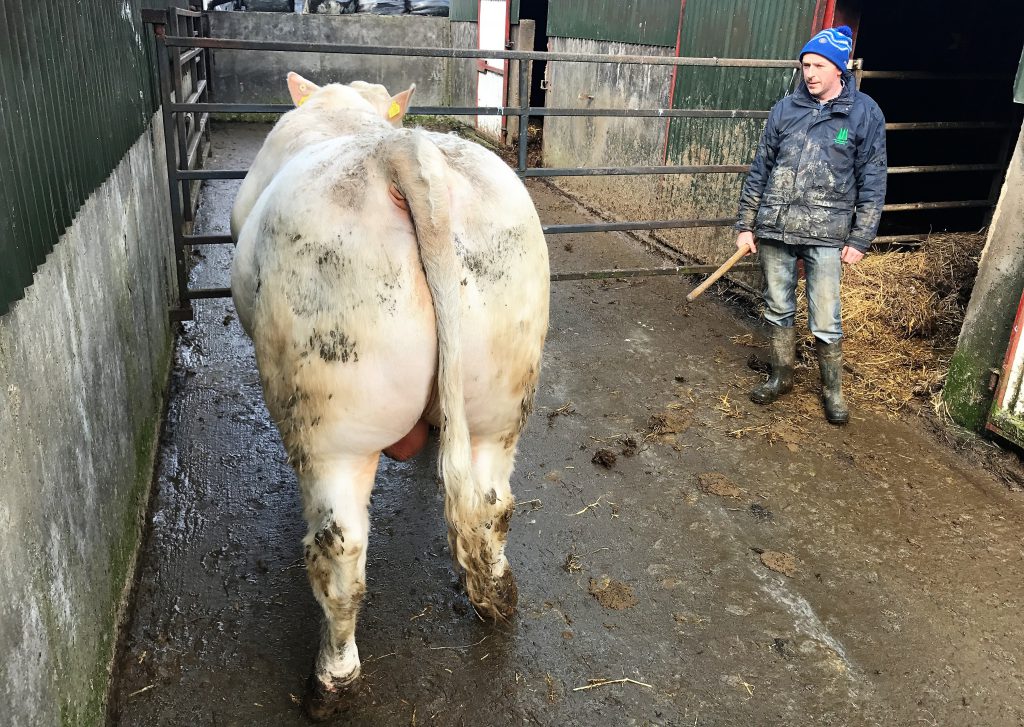 Christy with one of his purebred Charolais bulls

Touching on the beef that is sold in supermarkets, Christy stated: “They are selling Aberdeen Angus labelled beef in supermarkets. However, that’s only 50% Angus beef, the rest of it is made up from Jersey and Holstein Friesian. Why isn’t that on the packet?

“In five years time when the suckler cows are all gone, what are the factories going to show potential buyers? Are they going to show them the black and white cattle?

“No they’re not. Potential buyers will turn around and say you can keep it; we can get that type of beef anywhere,” he said.

Christy is the only labour unit on the farm and is committed 100% to produce good-quality stock. However, he explained that there is definitely more in it for suckler and beef farmers.

“The factories are crying out for good-quality cattle, but they are not willing to pay for them. This is where it’s stemming from.

“If it keeps going the way it is going, we won’t be able to stay at it. I’m putting my back to the wheel at the moment to stay going. 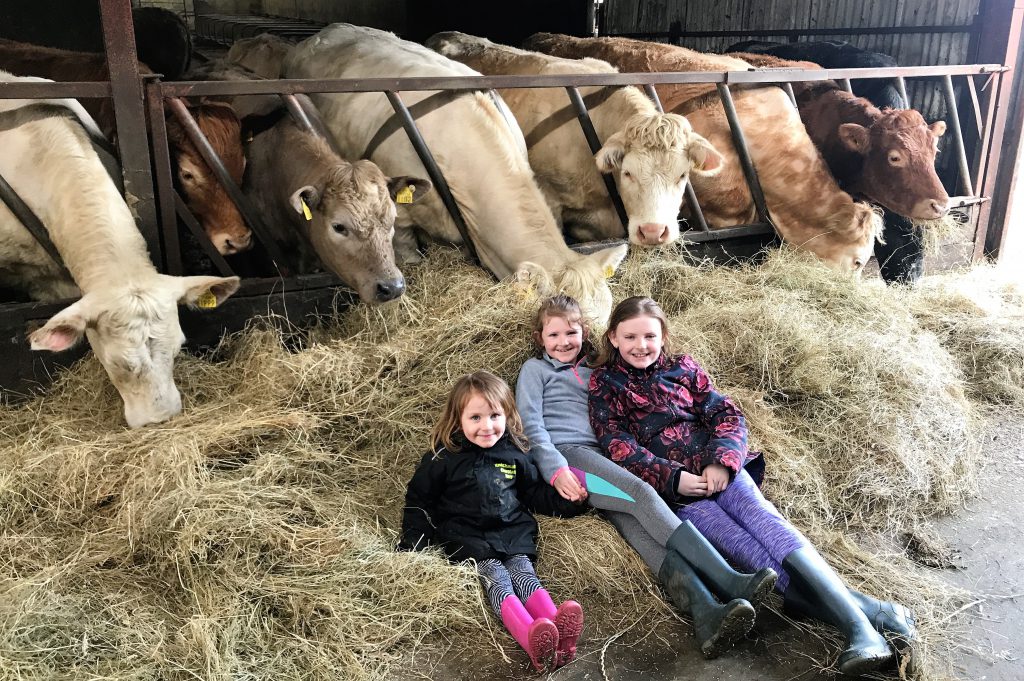 “There’s no money in the job at the moment. The factories are offering the same price for cattle from the dairy herd and the suckler herd – it’s ridiculous.

“If people do a full days work, they expect to get paid for it. We’re up calving cows and producing top-class animals and we’re working for pittance; the factories are creaming it up,” he explained.

The future for rural Ireland

There has been a lot of speculation about the future of the suckler cow in recent times and Christy is of the opinion that if the suckler herd is to be phased out, rural Ireland will be non-existent.

“There has been a fierce decrease in the quality of cattle in the last 18 months. It is going to ruin rural Ireland. We will end up with no one in small villages out in the country; they’ll all be in the towns and cities.

“There definitely should be a massive gap in price between an animal that is bred from a dairy type cow and a suckler cow.

“Until such a time as we are being paid a good price for our beef from the factories, the government will have to back up suckler farmers; if not, we will be gone,” he concluded.