Farming in Kilmanagh in Co. Kilkenny, Patrick Marnell is running a 60-cow dairy herd, alongside a beef finishing enterprise.

Once replacement heifers have been selected, the remaining progeny born on the farm are brought to slaughter. This is not a usual occurrence on most dairy farms, with a majority of farmers offloading their dairy progeny as calves or weanlings, in order to make room for further cow herd expansion.

Being a participant of the ‘Twenty20 Beef Club’, ran by both Kepak and Glanbia, Patrick has been strategic in trying to achieve the best price he can for his animals at slaughter.

The farm has been operating the same system for the past 40 years, by both Patrick and his father John, with both the dairy and beef enterprises always working hand-in-hand.

In the beef enterprise, the main change that has occurred in recent times is the animal’s age at slaughter. Patrick explains:

Since I started working on the farm with my father, we have seen the slaughter age of our cattle decrease by over 12 months.

“Until recent years, we finished our animals from the age of 30 to 36 months old when they were out on grass after the second winter.

“Then we started finishing the animals during the second winter when they were housed. It was actually during the drought period back in 2018 that things really changed. We were short on grass and we started feeding them out in the fields before the second housing and we got them finished. 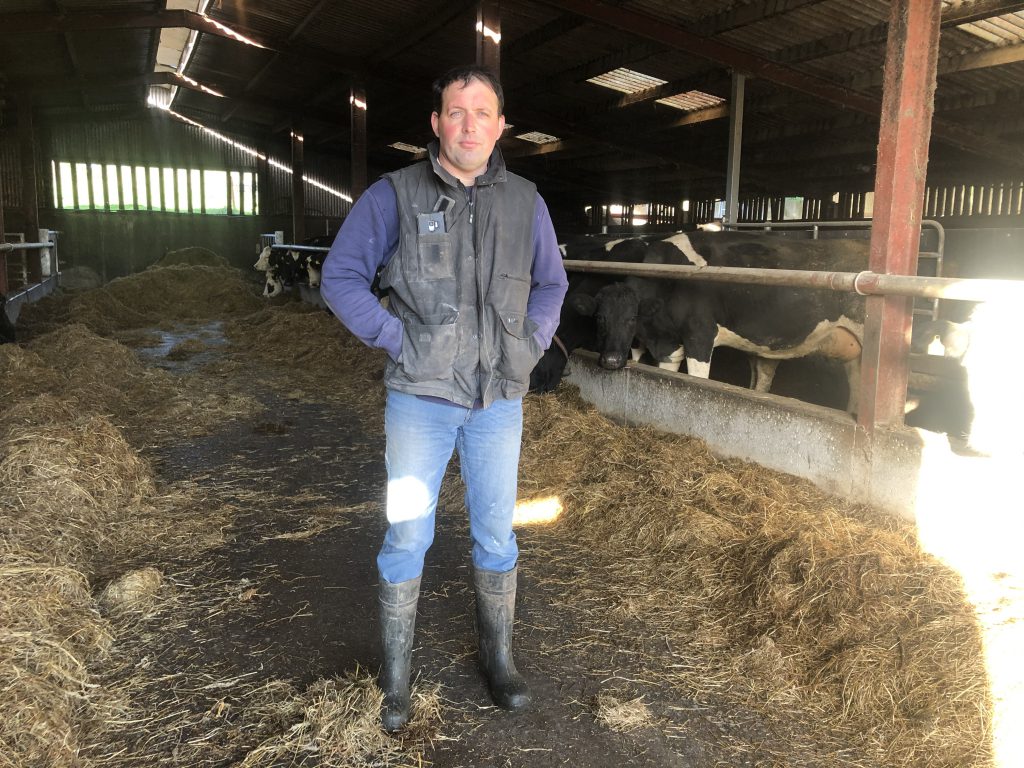 “It just clicked with us then, that it is possible to get these animals finished at grass before the second winter, so now we are getting these same animals away around 20-months-old.”

It was intriguing to see that as the popularity of dairy herd expansion across the country increased, the farm remained true to its roots and never shied away from retaining the calves born on-farm.

“Back over 40 years-ago my father was getting hassle with TB and the farm was stuck with them so that’s how it started. We haven’t had any issues with TB in the past 20 years, but we stuck to this system because it was safe. We have the ground to graze them and the enterprises wouldn’t be affected too much if we got locked-up,” he said.

“Look, we had been advised to increase the herd, but there were one or two bad years in milk where the beef cattle actually paid the bills for the farm. The enterprise is going okay and I find if it’s not broken, don’t fix it.”

The cow herd consists of generally Holstein Friesian crosses, with some Montbeliarde-sired cows also mixed through the herd.

The farm’s cow-type consists of a good-framed female with a powerful structure, which is easy to note across the herd. 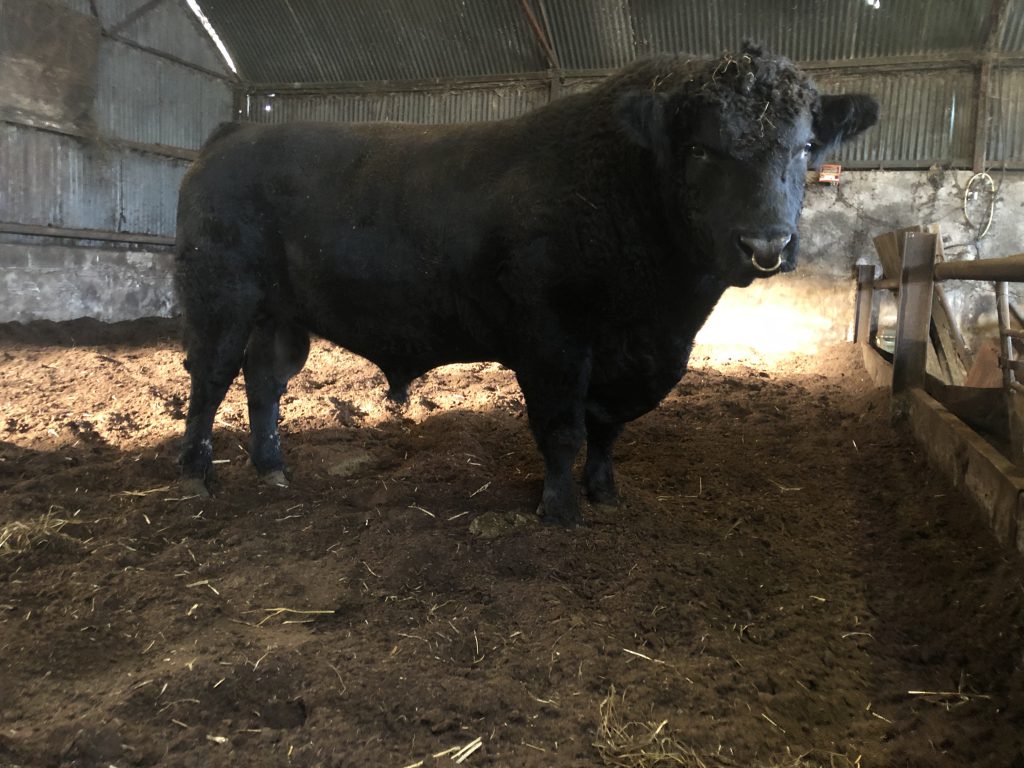 Angus stock bull on the farm

Both Angus and Holstein Friesian and some Montbeliarde sires are used on the herd, with the top performing cows being artificially inseminated (AI) to dairy sires at first. The Angus stock bull will then mop up any repeat heats. All heifers on farm are also mated with the Angus sire.

Last spring, approximately one-third of calves born were sired by a dairy sire, while the remaining two-thirds were sired by the Angus bull.

As the farm has installed two robotic milking machines, this leaves Patrick’s time more free to take care of the calves and ensure that they get a good start to life in their first few weeks.

“The calves are left suckling the cows for about two days after they are born. From there, they are then brought into their calf pens. 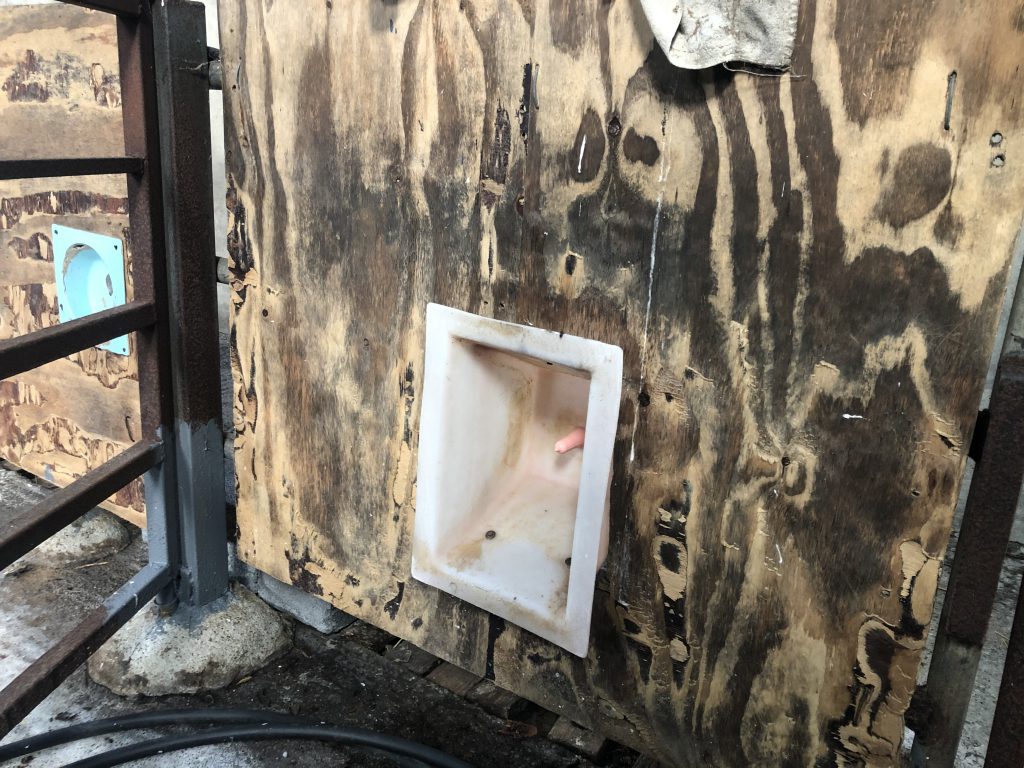 Teat feeder which provides ad-lib milk for the calves

“The calves are then fed on a calf milk feeder and they are fed ad-lib milk for the first few weeks. The calves should be drinking around 15L a day.

“We have tried different variations of feeding; we have fed all whole milk or all powder milk and then a mixture of both. There is always some issue that crops up and there is something new to be learned every year.

It can be a make up of the powder that may not be consistent in its protein content; some whey or skim milk powders work better when mixed with the whole milk. It’s a really delicate balance to try and get right.

“We are planning to install a new automatic milk feeder next spring which will be able to monitor each calf’s intake. This is mainly because if we have calves that are drinking an extra litre of milk that they don’t need, then there is a problem there with diminishing financial returns.

“The weanling process is slow, the calves are moved from the milk feeder to twice-a-day feeding once they reach between six to eight weeks old. From there, they are moved out onto grass with a bit of meal, along with receiving once-a-day feeding; then they are finally weaned.”

As previously mentioned, Patrick aims to finish both his bullocks and heifers off grass to avoid having to house them for a second winter. Speaking on his recent kills, he explains:

“The Angus heifers were slaughtered in mid-September, and these heifers received no meal until their last four to six weeks prior to slaughter. This was just to get that last finishing cover on them and they didn’t get a lot either.

“The bulk of bullocks would have been sent to the factory at the end of October, with about 15 bullocks being killed two weeks before that.

“For the bullocks, I did have to increase their meal levels that bit more compared to the heifers, because a few of them had stalled on me I think.”

As seen in the table below, the average weight achieved by both Patrick’s bullocks and heifers was 310kg – while close to 53% reached an R-grade. 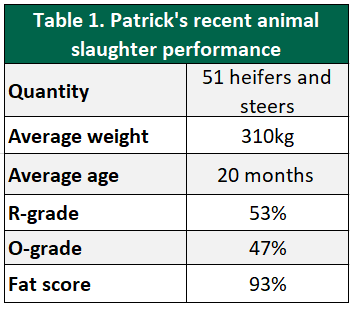 Speaking on the ranges in weight of the animals, Patrick noted: “With the really young heifers, it’s really hard to get that heavy weight into the carcass. The range went from 240kg carcass for an 17-month-old, small-framed Angus heifer, right up to 430kg carcass for one of the bullocks.

As a member of the ‘Twenty20 Beef Club’, Marnell is paid a premium when it comes to finishing his cattle; this premium can be anywhere from 15c/kg to 25c/kg.

Where the AQP falls under €3.85/kg, the club premium will increase cent for cent with any market decline up to a maximum of 25c/kg. So basically, what this means is, if the market price is €3.84/kg, a 16c/kg premium is applied, bringing the base price back to €4.00/kg.

So in Patrick’s case, when he was selling his animals, the base quote was worked off €3.60/kg. Adding his premium of 25c/kg brought his price up to €3.85/kg. He would then receive a breed bonus of 10c/kg for his Angus-bred cattle.

On top of this, he would be given a club protocol bonus of 20c/kg, bringing his total price for an R-/R= grading animal to €4.15/kg. See the table below to view the full bonus structure.

However, this price would vary depending on how the animals’ graded.

Commenting on the reasoning for joining the club, Patrick explained:

“With the criteria of the club, they were looking for farmers that were finishing animals at a younger age, which I was doing.

“It was completely suited to my farming system, and seeing that I was going to be paid more for my animals it just made sense really. Most of my animals would suit the weight and grading criteria.

“Especially with the uncertainty around Brexit, it provided me with some level of security. Also in previous years I had seen that there were gluts of animals coming out and I would have been doing well to get my animals away to be processed.

At least being a member of this club, with Kepak involved, its their own animals and I’m guaranteed nearly that I will get them killed. Participating in the scheme has added about €4,000 to the group of 51 cattle that I sold recently.

“I believe these animals are deserving of this premium bonus, they have never been moved off farm and from a sustainability point of view, they are being finished off grass and this is going to help Kepak make this meat more marketable.”

The Twenty20 Beef Club is currently recruiting for new members.