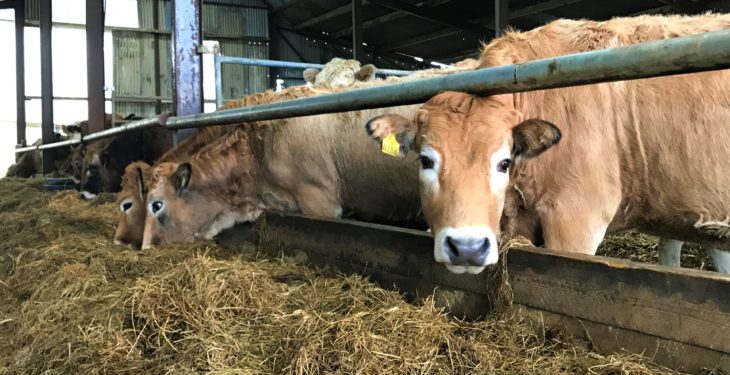 The Barron family has been farming in Adamstown, Enniscorthy, Co. Wexford, for generations. John and his wife Ann, along with their daughters Emma and Daire, run a medium-sized herd of 30 Aubrac cows. The farm stretches across 75ac and compromises of 50ac of grassland and 25ac of tillage.

In addition to the beef enterprise, the Barron family are also involved in a company called Biogreen, which is an oil-pressing plant on the site.

Speaking about Biogreen, John stated: “We buy oilseed rape, press it and sell the oil. It is used for coating oils in animal feed and for human consumption. We started operations in 2004 and press about 4,000t/year.

“The by-product is rape cake, which we use to make feed rations that we finish our own cattle on and sell across the country.”

Prior to the oil-pressing business, both John and Ann milked a herd of predominately British Friesian cows under a spring-calving system. However, as this business grew, the family’s workload was increasing by the day.

John said: “We simply hadn’t enough hands. Biogreen was very busy, so we got out of dairy and went more into tillage. 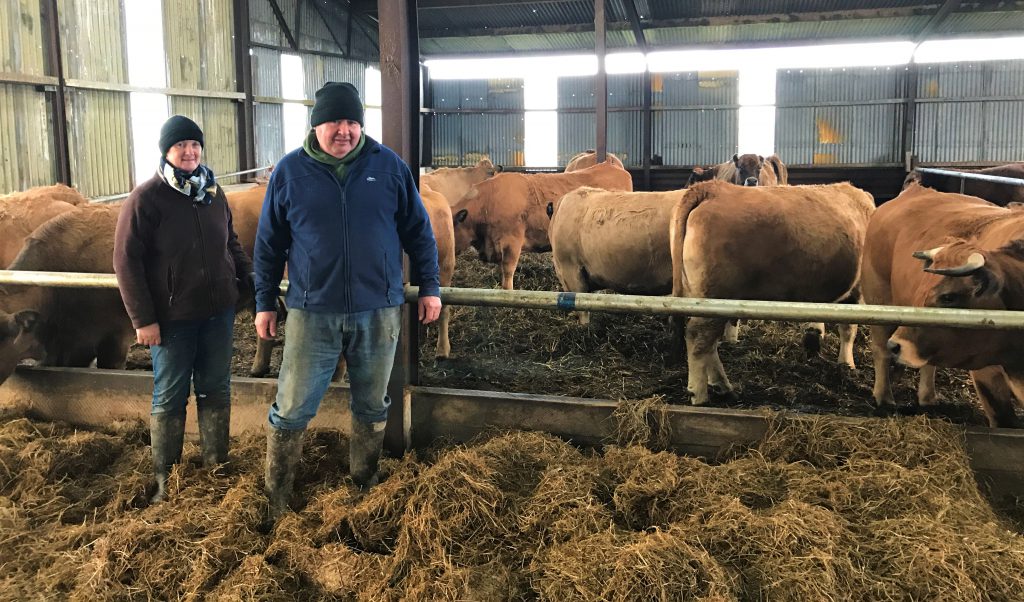 Getting back into cows

After approximately four years developing Biogreen, the Barrons decided it was time to get back to livestock farming.

The decision was made to go down the Aubrac route and it is safe to say that they are delighted with the decision.

“Originally, we had students here from the Aubrac region in France. We had seen the cattle on numerous occasions and it was my sister who had got into them first.

“When we got the feed business settled down, and got everything running the way we wanted to, we bought some Aubrac heifers.

“Basically it went from there. What really stood out was the finishing ability of the Aubrac bulls,” John said.

He continued: “We classify Biogreen as our day job and devote our evenings and weekends to the cattle, although they basically look after themselves.

The cattle keep us; we don’t keep the cattle. 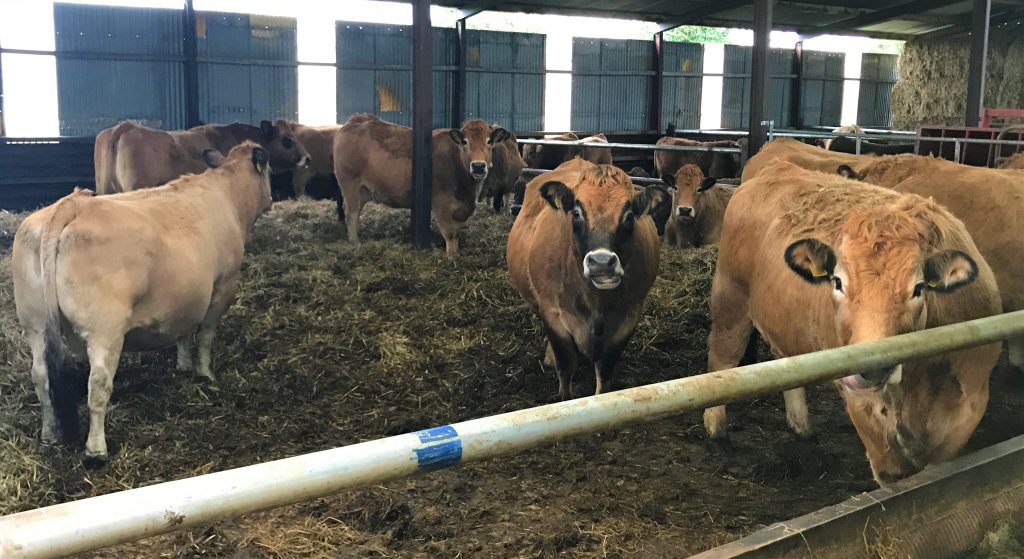 With the thriving feed and oil-pressing enterprise, the family need a breed that is low maintenance and easy to manage. And, with the Aubrac, this is exactly what they have.

John, who is on the council of the Irish Aubrac Cattle Society, said: “They are a very hardy and an easily-managed breed. They also have a good temperament; a short-gestation period (283 days); and work very well on Holstein cows.

“The biggest problem we have with the cows is keeping the condition off. At the minute, they are fed silage, straw and hay on three alternating days. We would never have thin cows.

“All cattle get treated for IBR and that’s it – nothing else. After that, they are left to their own devices. They have a mineral bucket in the field and some rock salt,” he explained.

On the day that AgriLand visited the farm, it was plain to see how easy calving the breed is. While there, one cow calved unassisted in a matter of minutes. Newborn calves weigh approximately 35-40kg.

All heifers are kept for breeding on the farm. They are bred at 15 months  and there is no problem meeting targets. John also explained that there are never any fertility issues.

“It is very important for us to calve heifers down at 24-26 months. If we don’t, we will run into serious trouble; they would weigh approximately 600-700kg and there would be a lot of difficulties come calving,” he added. 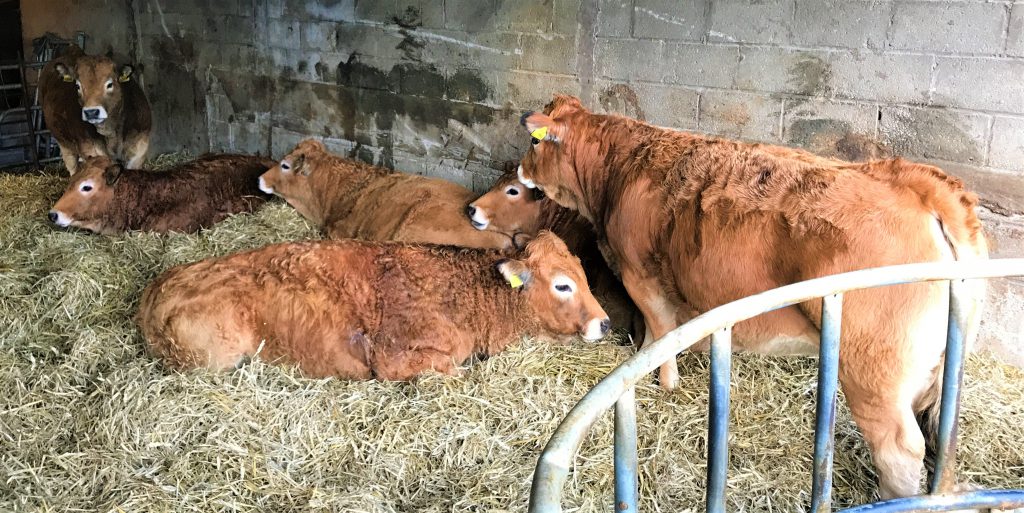 “We sell the pedigree bulls from 16 months. We find that people are looking for older bulls. We recommend that the young bulls are put with some heifers starting off, as you can’t give a chap a man’s job,” he joked. 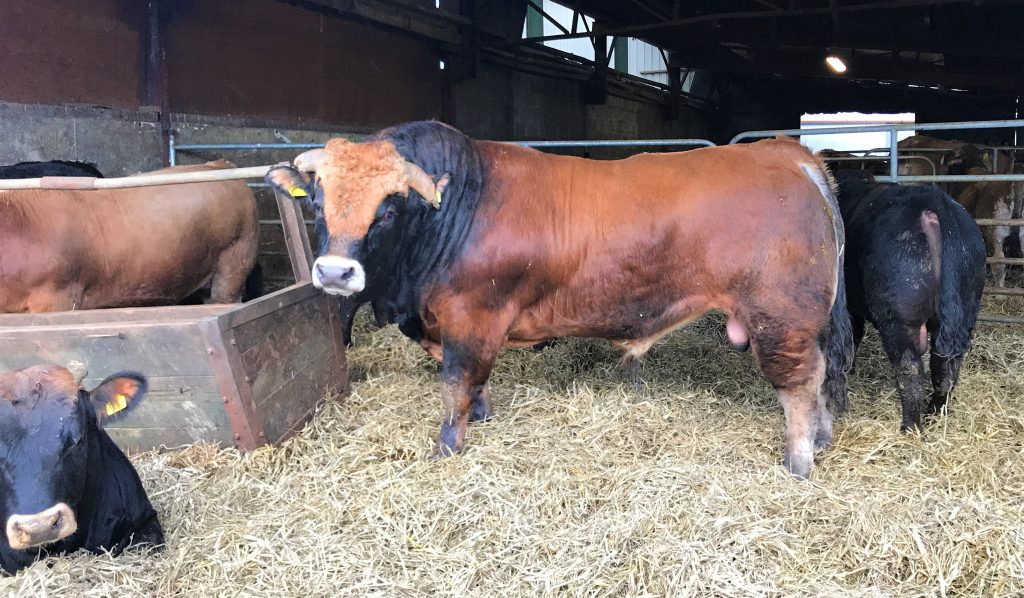 Offspring are weaned at nine months. The crossbred bulls are then fed a ‘grower’ ration for approximately two months.

On this, the weanlings have an average daily gain (ADG) of 1.7/kg/day. Cattle are weighed every three weeks to record progression.

The eye can tell a lot, but the weighing scales will tell everything.

The ‘grower’ ration contains approximately 33% less maize meal than the finisher ration. Silage and hay are fed along with the ‘grower’ meal as a source of roughage.

“The Aubrac breed have an excellent feed conversion rate. From the age of 16-17 months, that’s when the cattle really come into their own.

“The rape cake is the only source of protein we use and the sugar content is increased as they get older,” he added.

The finishing stock are assessed by both John and Ann as they come close to slaughter. This is done by handling and weighing the animals.

“When they start to get a hard cover, we give them another month and then they go to the factory.

“We try and get them up into the 2+ or 3= score for fat. If you have that score on the cattle you can talk to them (factories). If you have cattle with a fat score of 1+ or 2-, nobody wants them.” 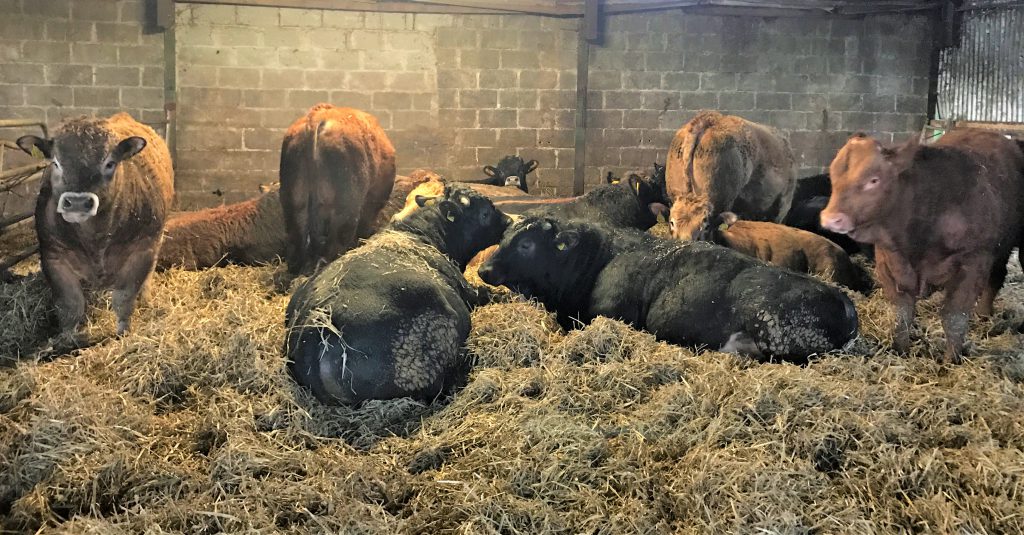 “Aubracs will deliver more cattle and more beef at lower costs. There are also opportunities to use Aubrac bulls in the dairy herd.

“Dairy farmers looking for a beef breed for crossing on dairy cows – not needed for producing replacements – should look no further,” John explained.

Ann commented on the breed’s milk potential, stating: “If you just depend on the dam to bring the milk, that’s no good. It needs to come from both sides.”

In relation to Brexit, John said: “It has thrown the cat among the pigeons. There is a market for the pedigree bulls, particularly with the Kiwi-cross and Holstein-cross cows in the dairy herd and that is only going to get better.”

“It is the beef end of it that is all up in the air. It could be disastrous not only for our beef business, but also for our seed pressing business. We buy some seed from the UK.

“The tariffs they are talking about for beef are just bananas. Everybody is talking about the North and the border being a problem.

“Our main business is not south-north, it is south-east [Ireland and UK]. This is the border we need to be looking at,” he said. 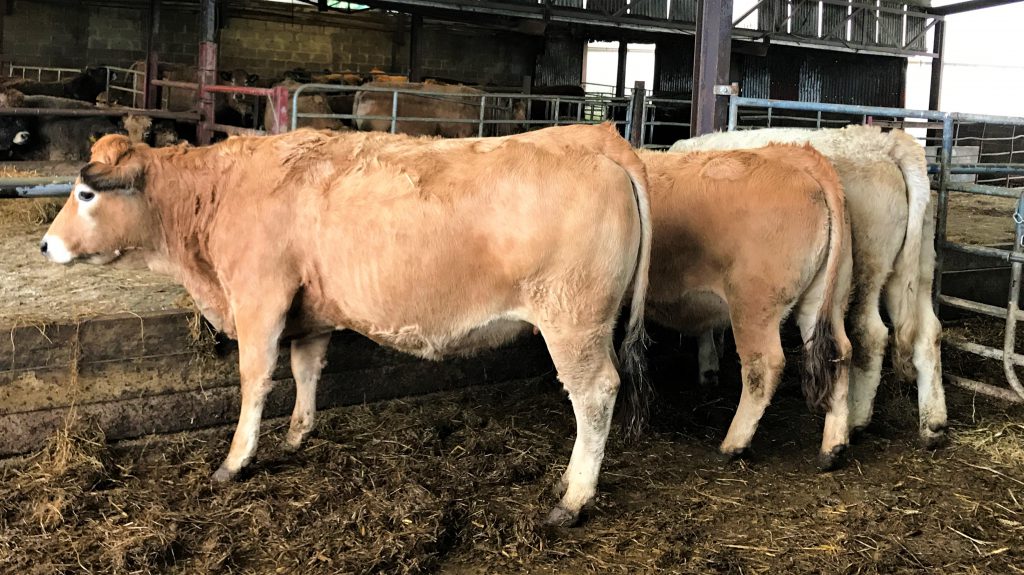 In relation to Mercosur, he said: “I think Brexit is a far bigger problem. It’s right beside us and the UK is our easiest roadway to all our markets in Europe. You deal with your neighbours first and that is what happens all over the world.”

Looking at beef prices in Ireland, John said: “For spring killing cattle, the bull price needs to be at base of €4.35/kg. That’s where it’s at. That’s the money we need to make a decent profit.

“Killing bulls under 16 months just doesn’t work for us. The bulls are just too light and they don’t come into money. But, this is what the factories want.

“But yet, they turn around and say that they are not getting the meat yield from the cattle,” he concluded. 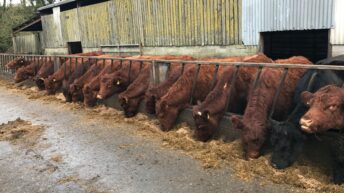 Beef focus: Breeding the best of both worlds in Co. Meath 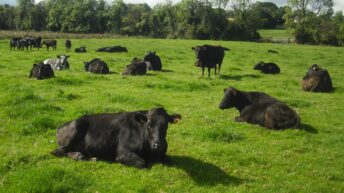