Beef farmers are being urged to “build a paper trail” on price quote correspondence between themselves and meat processor agents – or such equivalent parties.

The intention is that such a record would assist in “bringing greater transparency” to the trade – which is often criticised by multiple farming and agri-political representatives as operating in a “cartel-like” manner.

Speaking at an information meeting that focused on the ‘Irish Beef Sector Agreement September 15, 2019’ and the recently-formed producer organisation Irish Beef Producers, Eoin Donnelly of the Beef Plan Movement (BPM) highlighted the value of primary producers chronicling such data.

The move was also discussed at length during the recent cross-stakeholder beef sector reform talks at the Department of Agriculture, Food and the Marine’s Backweston Campus; plus at Agriculture House on Dublin’s Kildare St.

“When you go to a factory to agree a price, even though it’s verbal, it’s a contract,” contends Donnelly.

“As part of the meetings in Backweston we simply asked for the quotes to come in writing. It doesn’t have to be complicated, it can come in a text or a WhatsApp, so that is how you get it in writing,” he said.

Addressing a gathering of about 150 farmers at the event – organised by Dermot O’Brien and the Kerry branch of BPM – which took place at The Heights Hotel in Killarney, Co. Kerry, last Saturday night, November 2, the BPM western chairman outlined four specific criteria that farmers should pursue during such correspondence.

There are a number of simple criteria: the type of animal (steer, heifer, cow, young bull); the number of animals to be killed; how much you will get paid per kilo as a base price; and the date they will be killed on.

“With those four criteria in a text you have a contract that is somewhat enforceable, so there is no arguing then over how many cattle were going to get killed or the price that you are going to get paid,” he said.

Donnelly, who acted as a lead negotiator for BPM during the beef talks, asked attendees at the session “how many times were you given a kill date only to get a call the night before, or the day before, to say ‘sorry we’re going to move those cattle to next week’?

“It also affects the 30-month age limit and often people will drift over it,” he said. 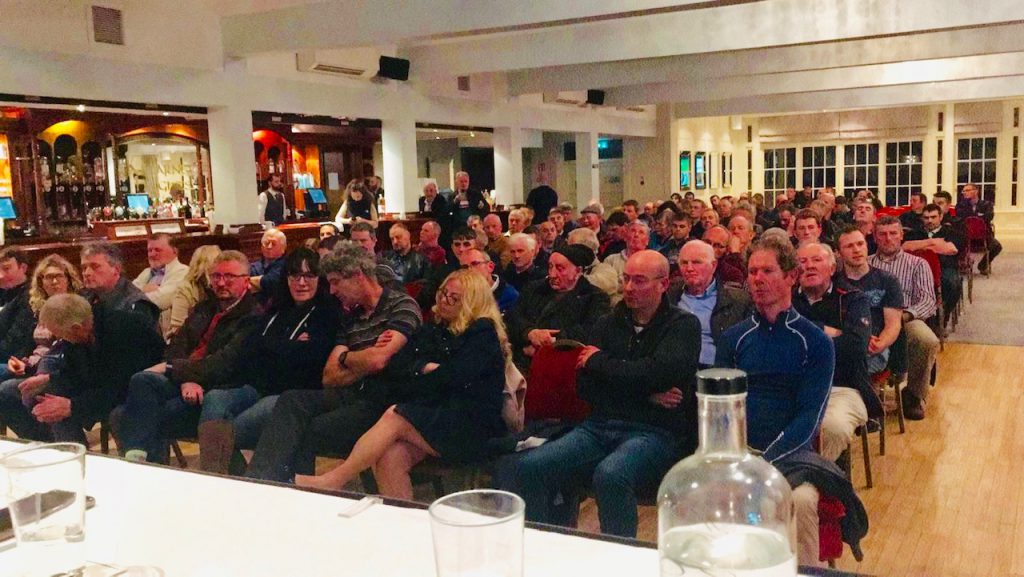 When the issue was raised with Meat Industry Ireland (MII) at the recent talks, Donnelly claimed that the meat sector representative body said that “66%” of quotes with farmers are “done verbally“.

However, Donnelly refutes this percentage.

“I would contest that certainly 90% is done verbally. How many people here have ever gotten a written quote from a factory?” he asked the floor.

“It’s all done over the phone with no trace. You must remember that one of the biggest challenges we have as a farm organisation is to prove that there is a cartel in the industry.

“For years I’ve heard ‘there is a cartel in beef’, but for years no one has proved it. Unless you can prove it you’re going nowhere; we’ve gone nowhere for the last 20 or 30 years,” he said.

It is worth noting here that last June the Competition and Consumer Protection Commission (CCPC) unequivocally stated in Leinster House that it has “not uncovered evidence of a cartel” operating within the meat processing sector in Ireland.

According to Donnelly, farmers can play a big role in challenging the status quo on this.

“What is the first thing you need? You need proof. How do you get proof? You get stuff written down.

“That is where you will start seeing if quotes are changing at certain times. If you can show that, then it doesn’t look like a free market.

“By putting it in writing it starts to build a paper trail as to what’s going on in the industry.

“And this is why I would contest that for 90% no paper trail exists on what quotes are being given to farmers.

When you start putting stuff on paper it’s auditable. If you have nothing written down, we will still be here in 10 years’ time, still going on about a cartel.

“It could be as simple as a text message with the four criteria – the number of animals, the type of animal, the price per kilo and the date they are going to get killed. That is the four things you want in the text.

“Then you have a record. The more farmers that start doing that the better because it starts conditioning that that’s the expectation that we have,” he concluded.