Beef factories refute claims that they have short-changed farmers

Claims that Irish beef factories have been short-changing farmers have been refuted by Meat Industry Ireland (MII).

MII, the body representing meat factories, has said that IFA claims on cattle prices and competition for finished cattle in the market are completely at variance with the facts.

In a statement, MII Senior Executive, Cormac Healy said the reality is that there is strong competition for cattle, even more so for in-spec cattle.

“This is in large part demonstrated by the fact that Irish finished cattle prices have been well above the EU average for the last 18 months and for a period this year, were well in excess of 110% of the EU average,” he said.

This is a phenomenal performance given that the Irish industry exports 90% of what we produce into markets where the price of cattle has been consistently below the prices paid here for finished cattle.

“What IFA fails to acknowledge is that Brexit is a significantly negative event over the medium term for Ireland and its immediate impact is already been experienced in the exchange rate volatility and loss of competitiveness.

“Instead of pursuing a false premise about weak competition, we should focus instead on the real challenges and risks for our sector arising from Brexit,” he said.

Healy also said the beef industry needs the Government to react quickly and decisively to ensure that Ireland’s food exporting sector is strongly positioned to withstand these competitive threats.

The statement from MII comes in response to comments made earlier today by IFA President Joe Healy and IFA National Livestock Chairman Angus Woods at a protest at the Aldi supermarket in Tullamore.

IFA President Joe Healy accused retailers and processors of failing to honour their responsibilities to farmers and consumers.

“Retailers are guilty of using farmer profiles to market our top quality beef to consumers pretending they are returning a fair price to the farmer.

“However, the reality is retailers are turning their backs on farmers by allowing processors to drive down prices to unsustainable loss-making levels,” he said. 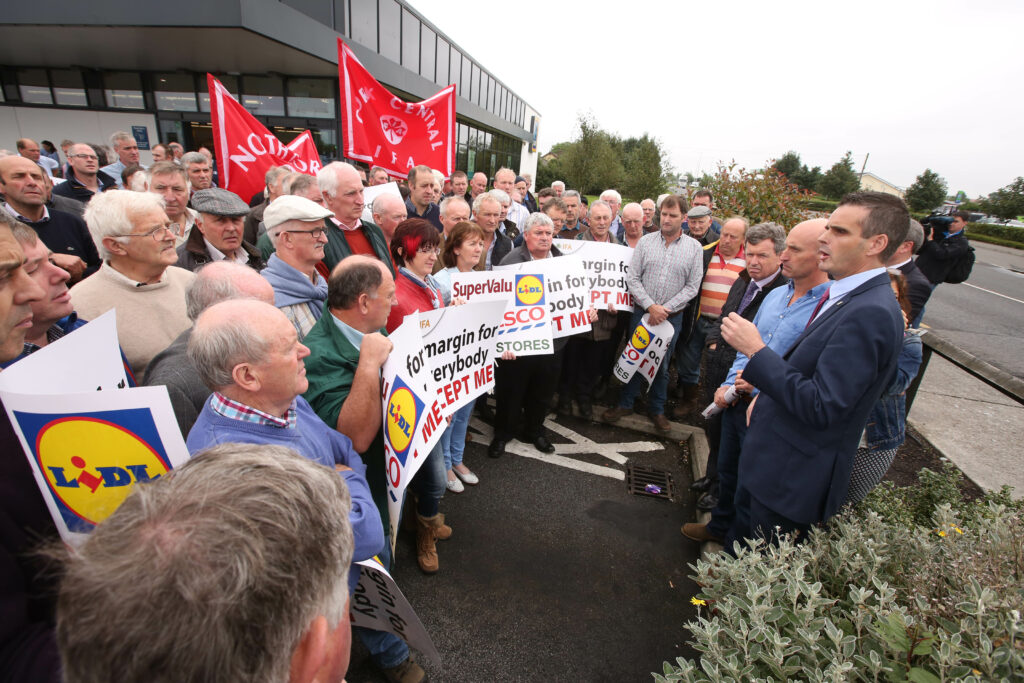 IFA President Joe Healy and IFA Livestock Chairman Angus Woods at the IFA protest at the Aldi supermarket in Tullamore.

The IFA President also said that what is happening to beef prices is anything but fair and these price cuts are totally unjustified and not based on market returns.

Since May 1, factories have cut prices to Irish farmers by 35c/kg, from €4.10 back to their current quoted base price of €3.75/kg, forcing farmers into a loss-making situation.

“Over the same period, prices in our main export market in the UK have risen by the equivalent of 50c/kg.

With average Irish retail price for beef at €8.92/kg, he said, retailers and processors have plenty of margin to pay producers a sustainable beef price in the range of €4.00/kg to €4.50/kg.

The IFA leader also said the beef price paid to the farmer is totally transparent and the lack of margin at farm level is there for everybody to see.

However, he said there is no transparency on profits of the major players in the industry or the money taken out of the price chain at each stage.

The failure to regulate the retailers and processors in the food chain is allowing them to drive prices to unsustainable levels.

“Retailers’ claims about sustainability are meaningless without a sustainable price back to farmers,” he said.

“We had the same tactics after Brexit, when the processors jumped the gun to turn the screw on prices.

“The market returns simply do not justify the cuts imposed on producers. Without a decent margin, farmers cannot survive,” he said.