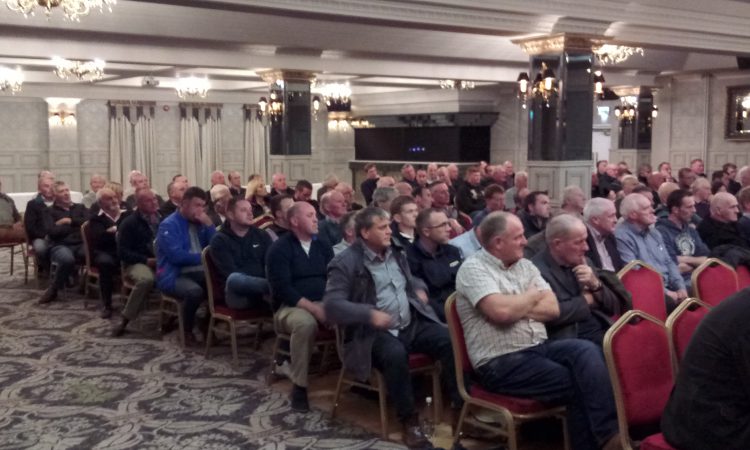 Almost 200 farmers from across Northern Ireland attended a ‘beef crisis meeting’ held last night in Cookstown – many angry and frustrated at the current price squeeze.

The meeting was organised by Northern Ireland Agricultural Producers Association, National Beef Association and Farmers For Action under the alliance ‘NI Farm Groups‘.

The night even saw some farmers involved in the beef protests in the Republic of Ireland travel from as far as Roscommon, Mayo and Waterford to attend.

Many personal stories and theories were put forward. However, there were several recurring themes to the discussions, with poor prices; unreasonable specification requirements; issues with Quality Assurance; and misrepresentation by retailers, all repeated points of contention.

Attendees voted by a show of hands over four motions, including giving the newly formed group a mandate to represent the region’s beef farmers.

Protests similar to those in the Republic of Ireland, where protesters interrupted deliveries to meat plants, were also discussed.

However, it was widely agreed that while such action had been beneficial in the south, that the timing of protests would put many NI beef farmers under further financial strain.

It was also argued that with the beef protests in the Republic now called off, the backlog of extra cattle from the South would mitigate the impact of any interruption of supply in Northern Ireland.

The way forward suggested by the panel was to issue an immediate request for Government aid for beef farmers.

It was also proposed that the new group would set up meetings with the Livestock and Meat Commission for Northern Ireland to focus on issues with the Quality Assurance scheme. The group will also seek to meet with the abattoir representatives on beef prices and specifications.

It was argued that ultimately the answer to the industry’s woes was to change the legislation surrounding farm-gate food prices – an issue which was discussed at length. However, it was also recognised that this would require Stormont politicians to be back to work to allow any potential bill to go forward.

Independent chairman Richard Halleron asked the audience to vote through a show of hands on several issues.

An overwhelming number raised their hands to say they would not be able to continue beef farming if prices continued to fall or stagnate.

Those in attendance also overwhelmingly agreed to have the three farm organisations present represent them in meetings with the LMC Board, abattoirs and over any potential Government relief.

Notably, every hand in the room was raised over two issues:

NI Farm Groups co-ordinator William Taylor said: “The message is loud and clear that Northern Ireland’s politicians – and indeed politicians across these islands – need to wake up and smell the coffee.

“The problem is that when you give support money to farmers, the abattoirs just drop the price.

“The real answer is to bring in legislation on fair farm-gate prices across the stable – whether that is milk or meat or any food grown in Northern Ireland.” 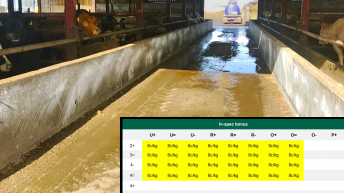 Beef trade: How the new in-spec bonus will be paid; plus prime cattle quotes unchanged