Many beef farmers travelled to the BEEF 2018 event in Teagasc Grange today to hear of possible avenues of increasing the profitability of their production systems.

However, one of the key notes to take from the suckler-to-beef stand was the effect looking within the farm’s own gates – and making the necessary improvements – can have on the farm’s bottom line.

Interestingly, McGee highlighted that the net margin difference between the national average and the top-performing commercial suckler herds stands at approximately €300/cow. 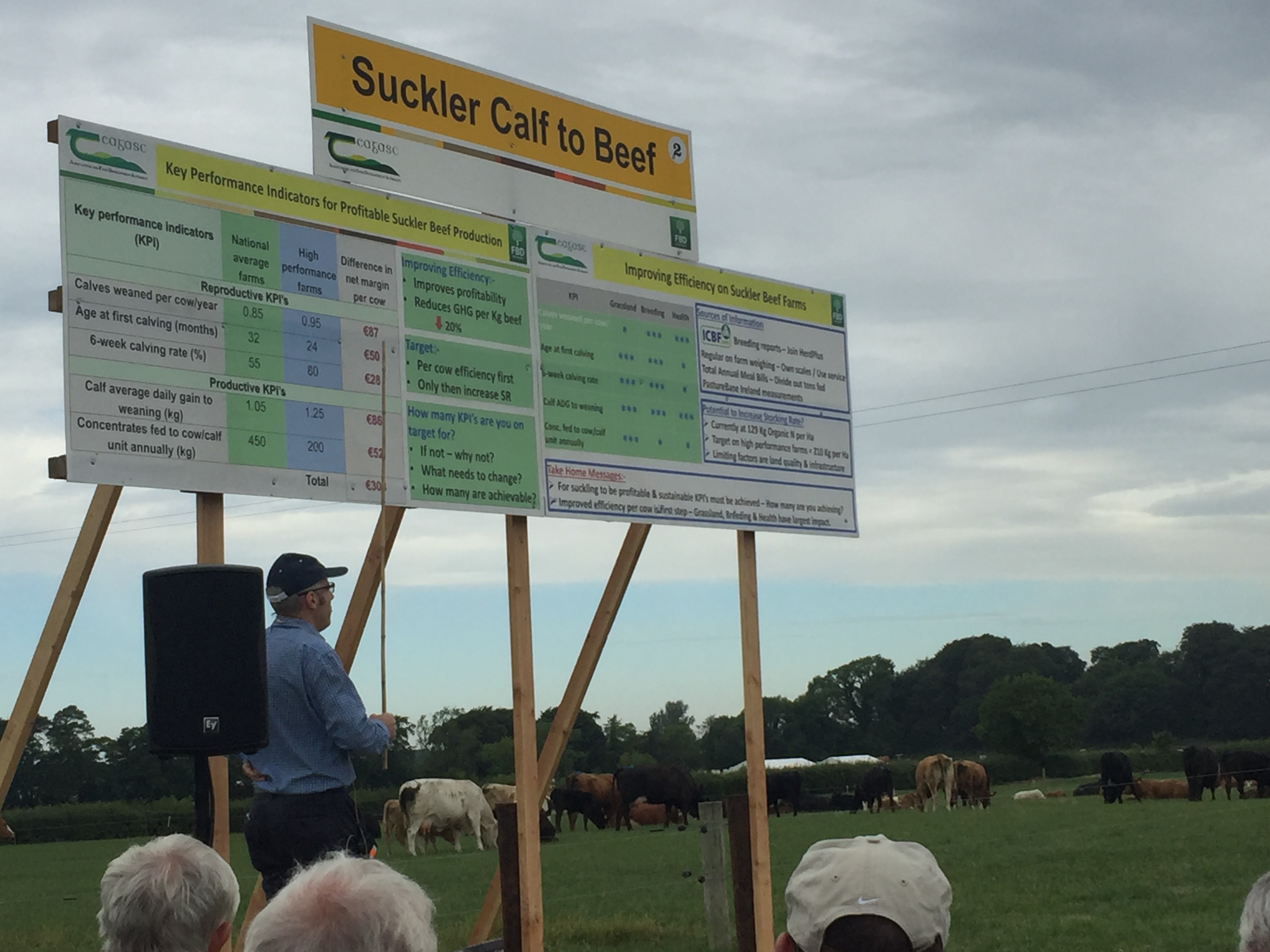 Breaking down how this difference arises, McGee said: “By KPIs we are talking about measures of technical efficiency on-farm, that farmers can use to evaluate the efficiency of their system and compare to more profitable systems.

“In effect, they can identify some of the strengths and weaknesses of their farming operation.

“In terms of a calf-to-weaning system, there are five essential KPIs. Those are: calves weaned per cow per year on the farm; age of first calving; a six-week calving rate; average daily live weight gain to weaning; and concentrates fed per cow/calf unit annually.

1. Calves weaned per cow per year

“In effect, the inefficiency here reflects differences in calving rate and calf mortality and this results in a difference in net margin per cow of about €87.”

When it comes to age at first calving, he said that the national average farm is calving heifers at 32 months – while the top-performing commercial farmers are achieving two-year-old calving.

The inefficiency we are capturing here is the cost of maintaining an unproductive cohort of animals on the farm.

“Essentially, breeding heifers are maintained for an average of an extra eight months without producing anything. There’s a cost to this which equates to somewhere in the order of €50/cow in terms of net margin.”

Another important area for profitability is a six-week calving rate. Nationally, he said, farmers are calving 55% of their cows in a six-week window; the high-performing commercial farms are achieving 80%.

He added: “The inefficiency here relates to feed costs. The high-performing commercial herds have a tighter calving pattern that’s more aligned to the grass growing season. Ultimately, they end up with lower feed costs in the system.

“On average, higher six-week calving rates means that farmers have older and heavier weanlings to sell at the end of the grazing season – and this also contributes to profit. Overall, it results in a difference in net margin of about €28/cow in the herd.”

On a national level, McGee said, growth rates of 1.05kg/day are being achieved on the average farms. Meanwhile, the high-performing farms are achieving 1.25kg/day. This difference in growth rates results in a net margin differential of €86/cow.

“Here, we are capturing the inefficiency associated with relatively poor-milking cows.

Cow milk yield is one of the key drivers of pre-weaning performance and, ultimately, cows with lower milk yields have calves with lower growth rates.

Another key driver of profitability of calf-to-weanling systems is the quantity of concentrates provided.

Nationally, McGee said, farmers are feeding just under 500kg of concentrates per cow/calf unit on suckler-to-weanling systems; but the high-performing commercial farms are feeding less than half of this. 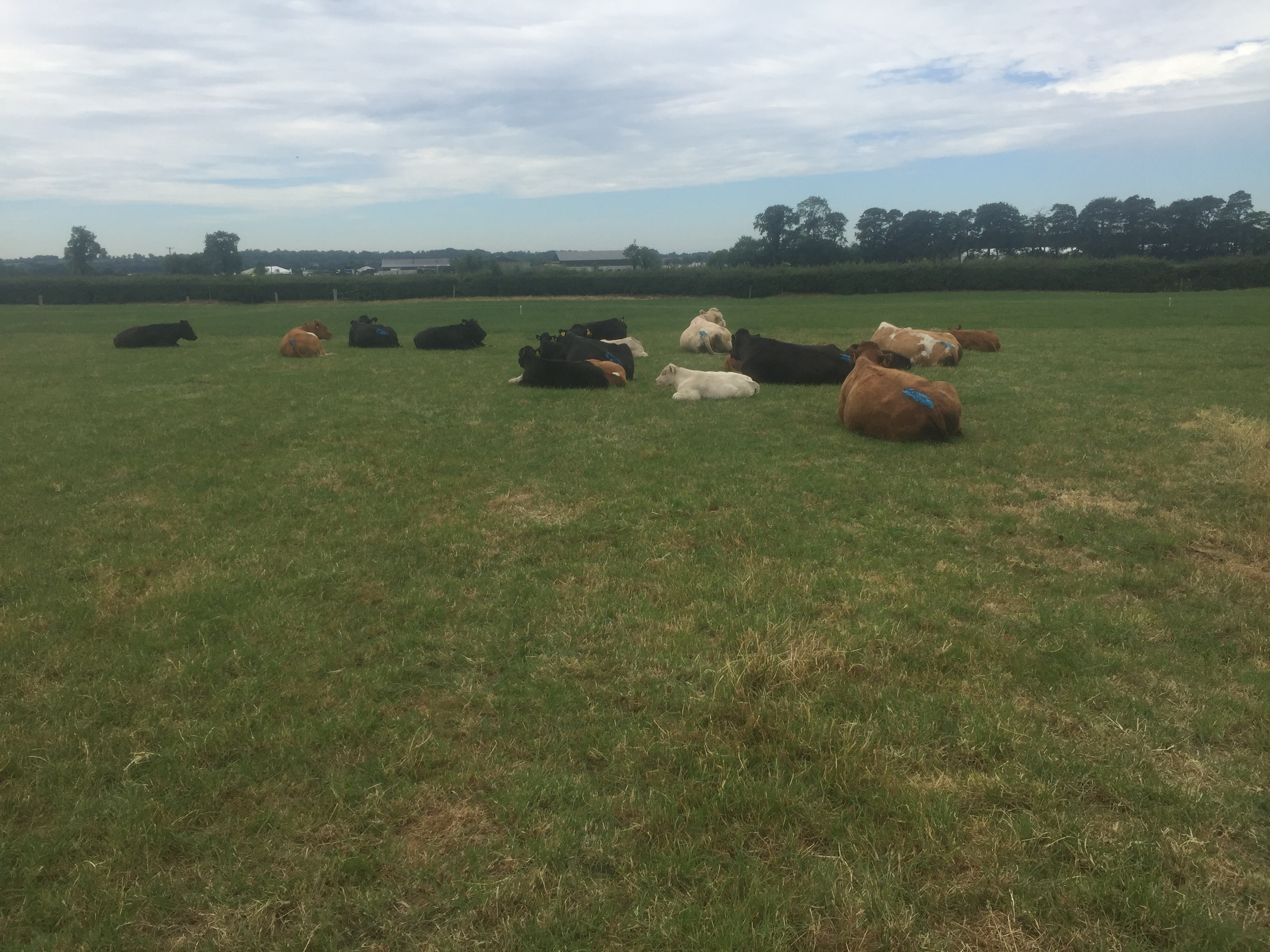 He also stressed that many of the farmers falling within the national average bracket feed concentrates to their cows over their winter months, due to insufficient silage quality and poor body condition scores at weaning.

In addition, he said: “A lot of concentrates are being fed to calves pre-weaning to increase growth rates and this is a cost.”

When pulled back to net margin terms, the varying concentrate feed levels result in a €52/cow difference between the high-performing and average herds, McGee concluded.

A focus on grazing infrastructure at BEEF 2018