What the selling agent hails as a ‘beautifully located’ 93.5ac residential and agricultural estate affording privacy and historic features is for sale by private treaty as a whole or in four separate lots.

Lying in a contiguous block, the land extends to about 93.5ac in total. The house is surrounded by gardens and has panoramic views of the south Wicklow countryside.

The property is accessed from a minor public road through a bell-mouthed stone wall with piers and cast iron gates. The gates open to an avenue, lined with beech trees and original stone walls, which leads to a parking area to the front of the house.

Originally forming part of the Meath estate, Upper Aughrim House is believed to date from about 1760. The front section of the house comprises a stone-cut façade, a later addition.

The main reception rooms are the focal point of the house, with large sash windows capturing the views over the manicured gardens and towards the Wicklow mountains. Throughout the house there are original features, such as ornate cornicing; hand-painted friezes; ceiling roses; and a mosaic-tiled hall floor.

The doors and windows in the main reception rooms are of note, with hand-painted timber panels and architrave surrounds. Attached to the rear of the house is a period cottage.

The extensive range of traditional outbuildings lie to the rear of the house, forming a spacious private courtyard.

A key feature of the land is the access via an integrated network of tree-lined private roads and tracks which benefit from many original features, including stone walls, steps and water features, as well as iron gateways. 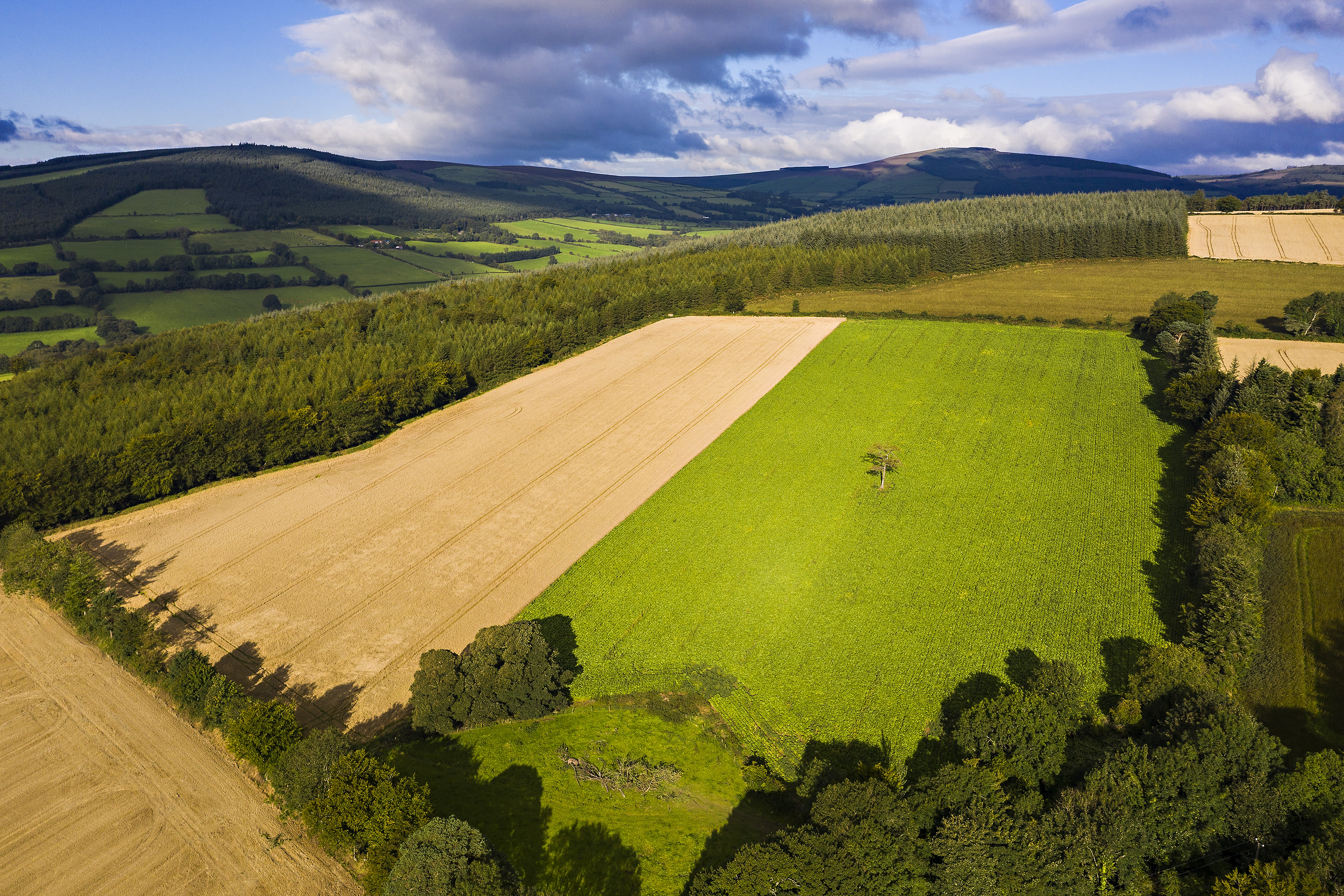 The fields are divided by mature hedgerows and are enclosed by a combination of stone walls and post and wire fencing. The land is currently leased on a seasonal basis and arable crops are grown on the farm, including winter wheat, spring barley and turnips this year.

Lot 1 comprises Upper Aughrim House on approximately 15.20ac to the south of the house. The land can be accessed off the main driveway and comprises two tillage fields. Lot 2, east land, consists of a ring-fenced block of tillage land, extending to about 26.30ac.

Lot 3 extends to approximately 23.10ac of tillage and a small area of mature woods. The land lies to the north of the property and is sheltered by mature deciduous trees.

Lot 4, west land – about 28.90ac – comprises what the agent described as a productive block of ring-fenced tillage land and permanent pasture. A field of permanent pasture offers amenity in the form of a stream and mature trees.

Picturesque Aughrim is famous for its granite and is often referred to as the ‘granite city’ due to the large amount of local buildings constructed using this stone. Aughrim has a long tradition of involvement in the national tidy towns competition and has won numerous tidy towns awards over the last 25 years.

Aughrim also received a gold award in the international Entente Florale competition. The Meath Arms country inn; Brooklodge Hotel and Wells Spa; and the Saturday country market are among the draws locally.

Upper Aughrim Estate is conveniently located for the market towns of Rathdrum (14km) and Arklow (15km), while the county town of Wicklow is 28km away. The M11 (19km) connects Dublin to Wexford. Annacurra National School is 4km from the estate.

The house is constructed of stone beneath a pitched slate roof, with accommodation laid out over two storeys. External features include a hipped roof, stone quoins and a portico. Stone steps lead to a reception hall which has a mosaic-tiled floor, ornate cornicing with hand-painted frieze and a centre rose.

The hall provides access to the two main reception rooms which are positioned to the front of the house and are facing south. The drawing room is an imposing light-filled room with timber flooring, decorative corniced ceiling and centre rose, and an open fireplace.

The kitchen is accessed off the sitting room through an open archway. It comprises an extensive range of floor and mounted units, as well as a Bosch cooker, gas hob and Aga range cooker. Directly off the kitchen is a pantry which includes storage and a double Belfast sink.

Two further reception rooms are on the ground floor, including an office and former school room, along with storage.

Bedroom accommodation is laid out on the first floor and is accessed via a staircase which opens to a landing that leads to five bedrooms and two bathrooms. All bedrooms incorporate large windows and expansive views. A separate staircase at the rear of the house leads to a sixth bedroom. 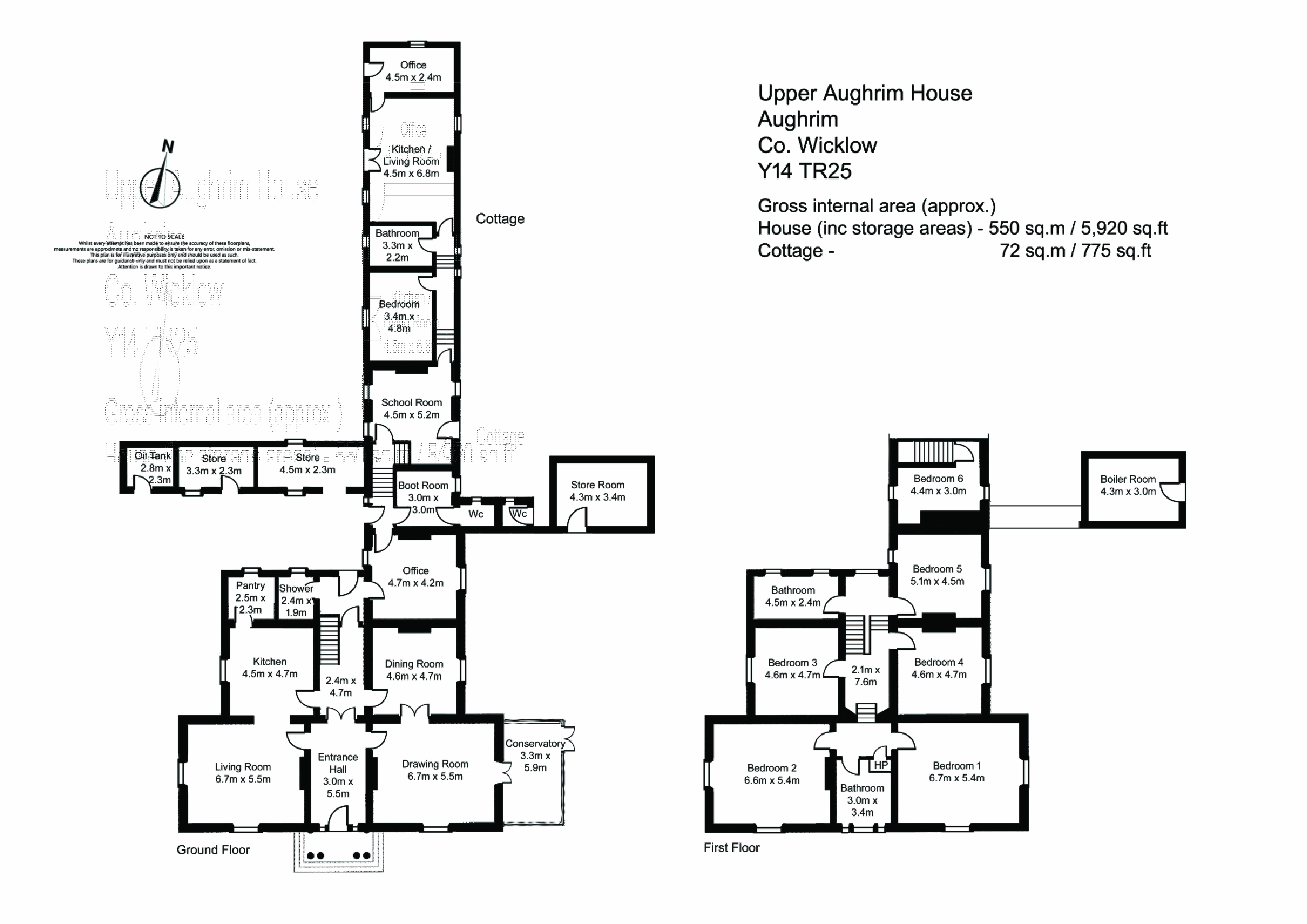 Adjoining the rear of the house is a cottage of traditional construction. It comprises an open plan living/dining/kitchen room with a wood burning stove, bedroom, office / second bedroom and a bathroom. The cottage has a separate entrance via the courtyard but can also be accessed through the school room. It includes a small garden.

The traditional outbuildings situated to the rear of the house have separate vehicular access. The walled yard can also be approached through an archway leading from the garden and features an array of outbuildings.

There is a two-storey granary and coach house with a workshop on the first floor. At the far side of the yard is an irregular L-shaped range of stone buildings housing stalls, a former dairy and multiple stores.

The courtyard buildings have undergone a programme of renovation, including extensive re-roofing and have water and electricity supplies. The extent and layout of the traditional range offers potential for conversion for a variety of uses, subject to obtaining the necessary planning consents, the agent said.

An archway from the courtyard leads into a substantial stone barn with high roof. Its scale and unique design are likely to have been industry-leading at the time of construction and it is reported to be one of the largest stone-cut barns of its type in the country. The barn has been re-roofed with slate and exposed timber beams.

To the south-west of the courtyard are the ruins of traditional buildings, believed to have been a stable yard.

Upper Aughrim is set within mature gardens grounds which have the backdrop of Croagh Mountain and the surrounding countryside. To the front of the house are sloping lawns with rhododendron together with specimen trees such as London plane; copper beech; monkey puzzle; oak; and cherry blossom.

Two original stone surround fountains take pride of place on the front lawn with a lily pond and terrace on the side by the sun room. 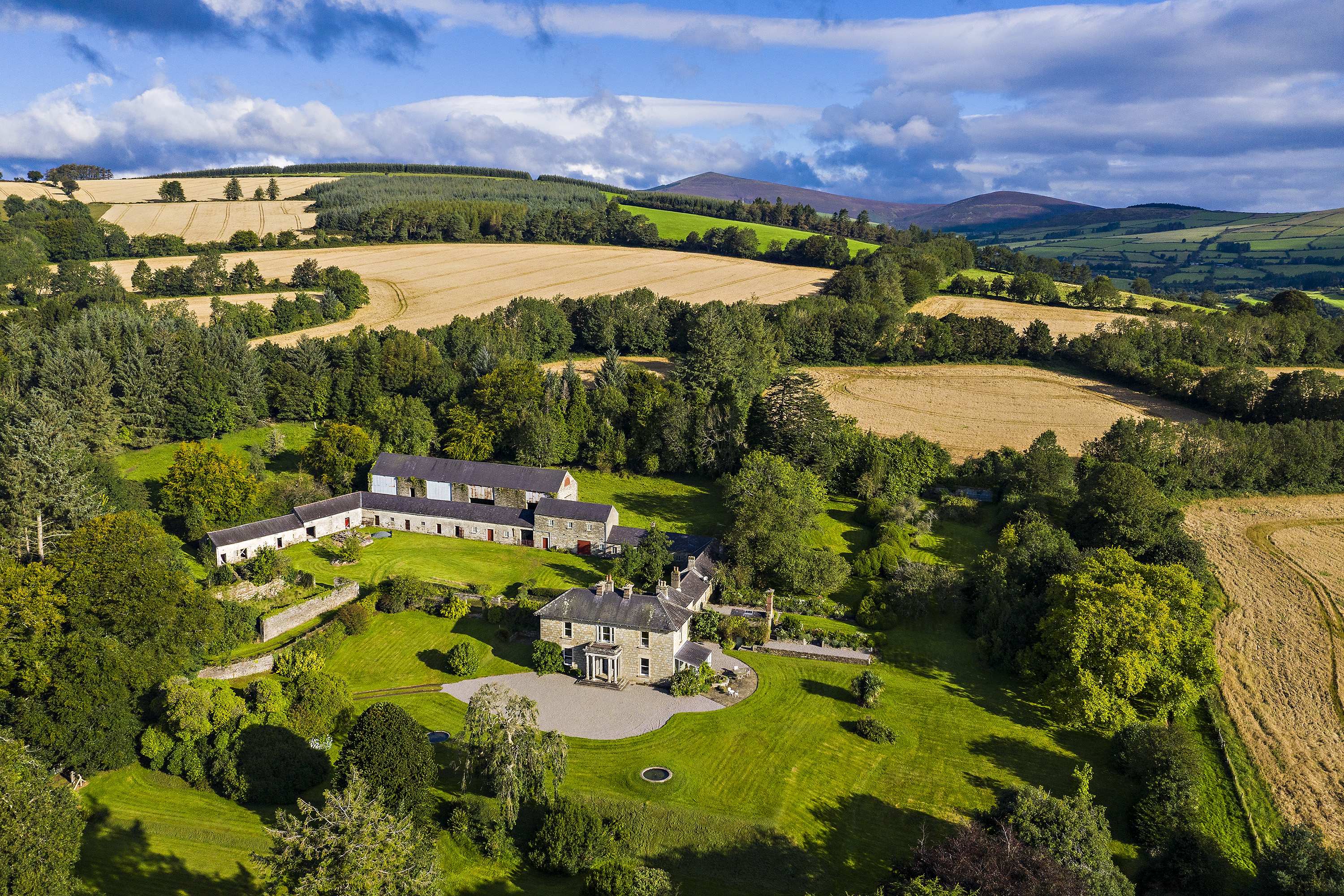 To the side of the house is a stepped terrace with flowerbeds. Rising towards the north of the garden is an apple orchard and box hedging which is believed to have once formed part of an original pathway.

At the top of the garden is a granite greenhouse. A store of traditional stone and slate construction adjoins the eastern side of the house and has external access. It includes a red brick chimney and is believed to have been constructed as a boiler room to serve a large palm house which was added to the eastern front of the house and is the site of the current conservatory.

The guide price for the whole property of the 93.5ac Aughrim estate is €1.8 million.

'Touch of boom activity evident in land sales amid uncertainty'