To date in 2016, up to September 30, there has been three confirmed findings of ash dieback in farm landscaping / agri-environment scheme plantings, the latest data from the Department of Agriculture shows.

Findings of the disease ash dieback, a disease of ash trees caused by a fungus, have been confirmed in a further 140 forestry plantations.

This brings the current total for forestry plantations to 255.

The data shows that 10 of these new forestry findings were in counties where up to the end of 2015 there had previously been no confirmed findings in forestry plantations.

These findings increased the distribution of findings in forestry plantations from 19 to 21 counties.

There were also notable increases in findings in forestry plantations in a number of counties where the disease had previously been detected, particularly counties Clare, Cork, Galway, Laois, Kilkenny, Mayo, Meath, Tipperary, Wexford, and Wicklow.

In the same period there were two new confirmed findings in commercial nurseries and two re-occurrences of the disease in two other nurseries.

One confirmed finding was in a private garden and 22 individual samples taken from trees in roadside / motorway landscaping plantings in counties Cork, Galway, Kildare, Kilkenny, Laois, and Westmeath tested positive.

The findings in trees in native hedgerows in counties Kilkenny, Mayo, Meath, and Wexford, which resulted from routine inspections as well as targeted and systematic surveys over the summer months, are the first confirmed findings in that context in these four counties.

This has also increased the distribution of findings in native hedgerows from 12 to 16 counties, according to the Department.

This increased the distribution of findings in roadside / motorway landscaping plantings from 13 to 14 counties.

Taken together the new findings to date in 2016 indicate a continual widening of the general geographic distribution of the disease and that the disease is present, to a greater or lesser extent, in all 26 counties in Ireland. 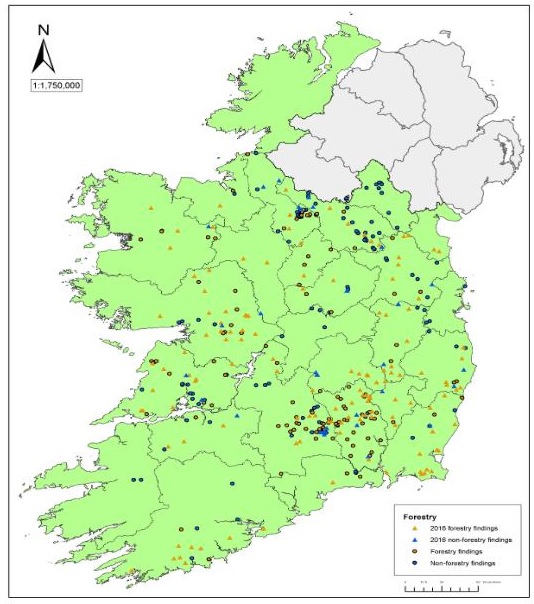 Distribution map of confirmed findings of Ash Dieback in Ireland.

*The locations of commercial nurseries and garden centres are not depicted.