Farmers in the Republic of Ireland received €118.72 less for a 280kg R3 grade heifer carcass compared to prices in Northern Ireland, figures show.

In the Republic of Ireland the R3 heifer price stood at 375.3c/kg in the week ending December 11, following an increase of 7.3c/kg from the same week in November, figures from the Livestock and Meat Commission show.

However, farmers in Northern Ireland were taking home 417.7c/kg on average for an R3 grade heifer in the week ending December 11, leaving the price difference between north and south at 42.4c/kg.

In the space of four weeks the R3 heifer price in Northern Ireland increased by 24.6c/kg.

The EU average price had increased by 4.2c/kg when compared to the corresponding week in November.

This meant that the R3 heifer price paid to farmers in the Republic of Ireland was 3.4c/kg below the EU average at the beginning of December.

The price difference between Northern Ireland and the EU average widened from 18.6c/kg in the week ending November 13, to 39.0c/kg at the start of this month. 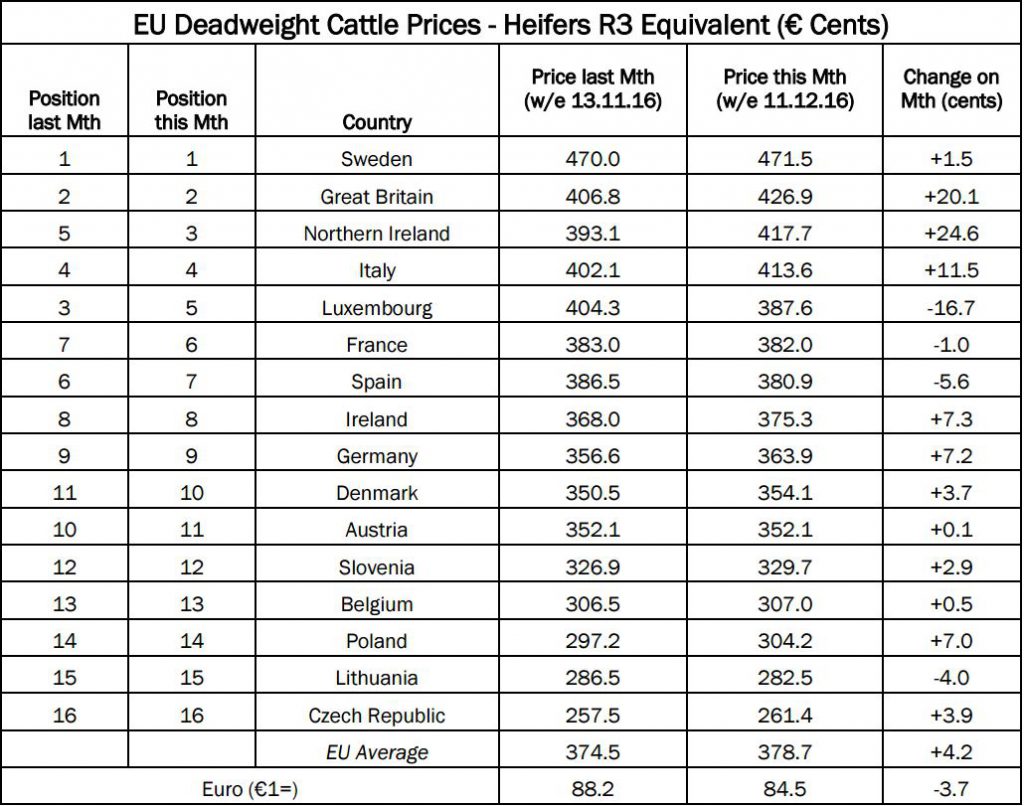 Across the Irish Sea, farmers in Britain were getting a R3 heifer price of 426.9c/kg in the week ending December 11.

Compared to the previous month, this was an increase of 20.1c/kg and left it 48.2c/kg above the EU average.

As it stands heifer prices in Britain are still well above prices seen in Northern Ireland and the Republic of Ireland, with a difference of 9.2c/kg and 42.4c/kg respectively.

With regards to the EU league table, the Republic of Ireland continues to remain in eight place.

However, both Britain and Northern Ireland place much higher up the table, taking up both second and third position.

In the space of a month, Northern Ireland managed to move from fifth to third, thanks to a price increase of 24.6c/kg.

There was very little movement in the table besides, with Sweden continuing to lead with an advantage of nearly 50c/kg over Britain.