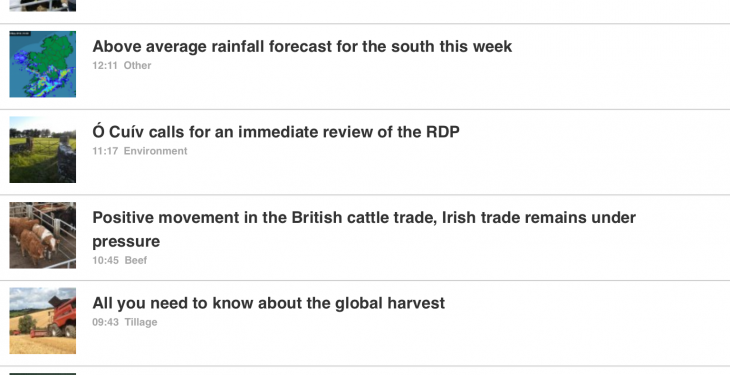 The team here at Agriland.ie is delighted to announce that it has just launched its first app this week.

The Agriland news app will make it easier for our readers to stay up-to-date with all the latest agricultural and farming news from Ireland, Northern Ireland, Europe and around the world.

Now, readers can have up-to-the minute news, information and features on all that is happening in the agri world.

The launch of the Agriland.ie app will allow readers access the most recent news stories as they happen, on their phone or tablet, on both IOS and Android.

Stories are arranged in categories including latest news; comment; EU and Northern Ireland. The app will also allow our growing readership to engage further with us, get involved in debate and to also share their favourite stories.

Features of the app include the option to save stories to read later, while innovative features such as swipe for the next story, make it easy to keep up-to-date while out and about on the farm, or while on the move.

“The last few years have seen a huge swing from traditional print media to digital media and everyone now wants up-to-the minute news and information at their fingertips. The news cycle has become shorter and to be reading about something that happened a week ago, especially in a rapidly-evolving industry, such as agriculture has become, is too late,” says Margaret Donnelly, Editor at Agriland.ie.

“Farmers are business people and need the latest information at their fingertips to make sound farming business decisions. They are also early adopters when it comes to new technologies and the rise of the smart phone in recent years goes hand in hand with this.”

Speaking about the launch of the news App, Agriland.ie Managing Director Cormac Farrelly said: “The news app was the next logical step in the evolution of Agriland.ie and was a result of listening to feedback from our rapidly-expanding audience. The site has seen huge growth in traffic month on month since its launch and, as the largest digital publisher in the agricultural space, we need to keep evolving to keep up to date with what our readers are looking for. The launch of the news app is the first step in a series of digital upgrades we have planned over the coming months.”

Agriland.ie is the both the largest, and fastest growing, agricultural portal in Ireland and is now considered by many as the premier site for agricultural news, from Ireland, Europe and the world. We deliver the most up-to-the minute, and relevant, news from all agricultural sectors, including dairying, beef, sheep, tillage and agri business.

And, of course, downloading the app is free and simple!