Coveney gives some ground on commonages, as protests continue at Taoiseach’s Castlebar office 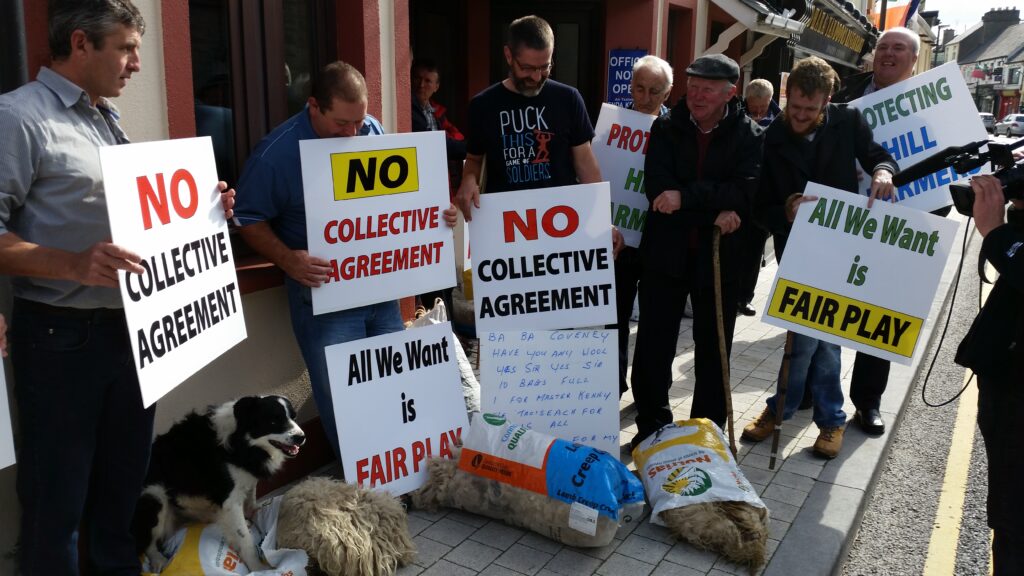 In advance of a meeting between the Commonage Implementation Committee and the farm bodies, Minister for Agriculture, Food and the Marine Simon Coveney has announced that a number of important decisions had been reached in relation to commonages.

However, the Concerned Hill Farmers Action Group are continuing its protest outside the Taoiseach’s Enda Kenny Constituency Office in Castlebar. It is seeking the support of Enda Kenny to secure a better RDP (Rural Development Plan) for commonage farmers and plans to stay picketing until their issues are resolved.

Minister Coveney said today that a lot of progress has been made and the forthcoming series of meetings will help to reassure Commonage farmers and provide the clarity that farmers have been seeking.

With respect to Pillar 1, the Basic Payment Scheme, the Minister said that there will be a maintenance grazing requirement for marginal lands. This will be equivalent to one ewe per 1.5 hectares, to be met by all claimants by end December 2015. A lower level will apply where this can be justified on environmental grounds. Above that maintenance level, the management of the grazing requirement is a matter for the individual claimants, provided that the commonage is kept in good condition and meets all the requirements for the Basic Payment Scheme.

The Minister has also said that the contentious issue of collective agreements remain a requirement of the new GLAS scheme. For Pillar 2, the Minister repeated that the only requirement for commonage farmers joining was that 50% of the active farmers would sign up to a GLAS commonage plan or sufficient farmers to bring in at least 50% of the land. He also said that small commonages of less than ten hectares in size would not be subject to any minimum participation requirement. Farmers on these commonages would be able to apply for GLAS in their own right.

According to the Minister in a significant development, he has announced that there would be no imposition of minimum or maximum stocking densities for commonages. Instead, the Department would provide these figures as a guidance to help frame the new GLAS Plans. It will be open to the shareholders through their planner to propose different stocking densities in their Plans, if they believe these can be sustained. There would be substantial flexibility granted to the shareholders joining GLAS as regards the management of the grazing requirement. Provided an individual minimum grazing requirement is met by each of the participants, it will be open to the shareholders, acting together, to manage any additional grazing needs themselves. Over the course of the GLAS plan, there would be a gradual progression towards meeting the optimal grazing level for the commonage.

For those farmers operating under a GLAS Commonage Management Plan, the Minister stated that where non-compliance could be clearly attributed to an individual participant, penalties would be applied to that person only. The rate of aid for commonage under GLAS remains at €120 per hectare. Commonage farmers with more than one priority asset will be eligible for the increased GLAS+ payment of up to €7,000.

The Minister also announced that in the coming weeks there will be a series of regional information meetings for commonage farmers in a number of key locations, including Donegal, Galway, Kerry, Mayo and Wicklow. The Department will also be hosting National Workshops for the benefit of planners, outlining details of eligibility requirements for both the new Basic Payment Scheme and GLAS, including commonages. These will be followed up with specific GLAS training sessions for planners.