Digital development within the agri-food sector is becoming big business and while online sales in Ireland have increased by 16.1% over the past 12 months – the food and agri-business sector is lagging “despite some notable exceptions”.

This is according to David Leydon, author of IFAC’s Food and AgriBusiness 2019 report – which was launched earlier this week in Dublin.

The report suggests that as a result of Brexit and climate change, trade deals and changing consumer behaviour, Irish food and agri-business owners have “much to contend with”.

It also highlights the fact that outside of dairying many customers of agri-businesses who trade predominately “are under pressure”.

Meanwhile, Leydon says there has been “a material uplift” in online trading since the 2018 report by the organisation.

Sentiment towards trading online has deteriorated.

He continued: “Despite increasing digital clutter in people’s lives, businesses continue to see good effectiveness in the use of Facebook, with three in four companies seeing value in the platform.

“Instagram saw the largest increase in effectiveness – up from 9% to 15% year-on-year.

“It is also an emerging platform of choice for food and agri-businesses.

“The food and agri-business sector has an opportunity to use social media and emerging technologies to build more effective connections with their customers and differentiate their businesses.” 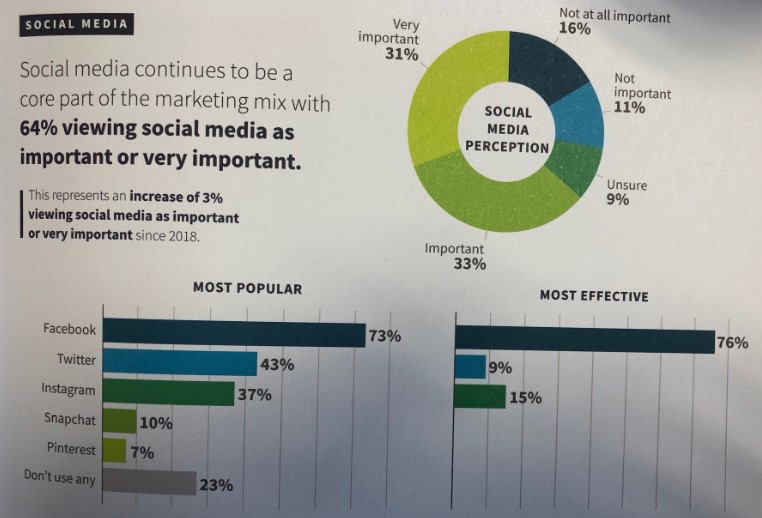 Meanwhile, according to the report, 66% of businesses surveyed have no plans to sell online.

Leydon says the reasons for the “slow uptake” of online sales opportunities are many.

They include the ongoing challenge of broadband and competition from online aggregators like Amazon.

He continued: “Other reasons include the lack of in-house expertise, cost concerns and the fact that market opportunity for online sales is not perceived as sufficiently large.

“However, in certain categories, online selling has an important role and can deliver on the good return on investments.”

Leydon then pointed to how social media continues to be “a core part of the marketing mix” within the sector.

64% of businesses surveyed view social media as important or very important – this represents a 3% increase on last year’s report.

He added: “Facebook is still dominant with 73% using this platform – 76% perceive it as the most effective social tool.

“Twitter usage has increased among food and agri-business SMEs from 34% to 43% year-on-year.