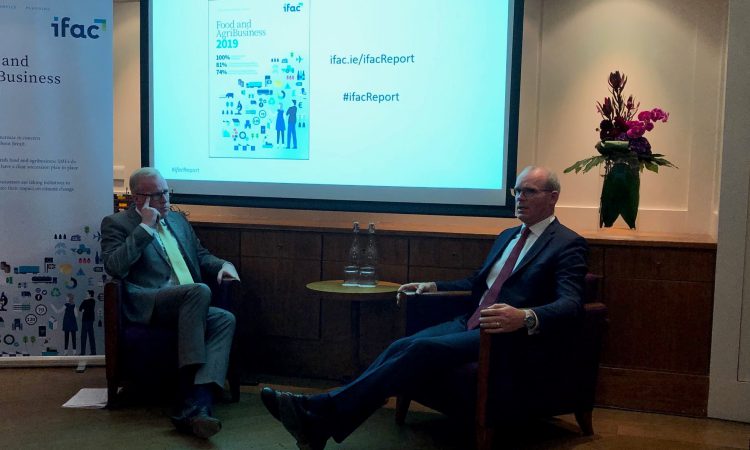 Ireland is not going to allow – as some would describe it – an ‘open backdoor’ into the EU single market through Northern Ireland without knowing what is coming, where it is coming from, how it’s produced, its origins and whether or not it is consistent with EU directives.

These are all things that Ireland and its people take for granted today but what can’t be taken for granted in the future – if the UK and Northern Ireland leave the EU and the single market, and the customs union – is that those standards and verification systems will apply any longer.

This is according to Tánaiste and Minister for Foreign Affairs and Trade Simon Coveney who provided an update on Ireland’s position in the event of a no-deal Brexit during the launch of IFAC’s ‘Food and AgriBusiness 2019’ report which took place today, Tuesday, September 10, in Dublin’s city centre.

Meanwhile, the minister pointed to the Government’s role in Brexit negotiations and how it approached the matter since it became clear that a no-deal outcome is very likely.

From an Irish Government perspective we are trying to prepare for multiple potential outcomes to Brexit and, obviously, the worst case scenario is a no deal.

Coveney continued: “We have planed – primarily – for what we call essential-case scenario which comprises a deal with a transition period and trade agreement thereafter.

“As a no deal becomes a very real possibility we have been working with our ports; we have also been working more closely with the European Commission on what it needs to do to manage contingency plans.

From a trade perspective we need to plan around the impact a no-deal Brexit is going to have on businesses here.

“We also need to work out how we will facilitate trade around haulage, aviation and a whole range of other regulatory issues that the EU collectively needs to plan for.

“There are also matters between Ireland and the UK around common travel area, legislation and preparation for a budget.”

The minister then pointed to how the UK will become a third country in the event of a no-deal Brexit and the impact this is going to have on business and the agri-food sectors.

Also Read: ‘We need to try and find solutions together as opposed to tearing ourselves apart’

“The UK will be a third county – tariffs will apply, regulatory checks apply, custom checks apply,” he added.

“For Ireland it will be like importing and exporting to a country that the EU has no stable trade agreement with.

“That could be very destructive given the scale of agri-food trade going both ways; it just so happens that a big part of that is the beef sector which is very vulnerable right now.”

‘A dual-challenge on the border’

Meanwhile, the Minister for Foreign Affairs and Trade pointed to the border and the “dual-challenge” that will be associated with that.

The border is another issue and we have very deliberately not attempted to resolve – with the European Commission – how to do this.

Coveney continued: “Because resolving the issue and being quite public about it when it’s done – in itself – causes a lot of disruption.

“So, it’s not the kind of thing we would do unless the problem is real and facing us as a very real possibility.

“So, we agreed in March with the European Commission that – when it became clear there was going to be an extension – we would work to use that time to address this dual-challenge of protecting peace; creating an all-Ireland economy in the event of a no-deal while at the same time protecting Ireland’s place in the single market.

The idea that I could allow a situation that Ireland would be dragged out of the EU single market by the UK’s leaving the EU with a no deal is something that I would never be forgiven for.

“We can’t do that and so we have to find a way of reassuring the rest of the EU – and also Irish consumers – that all the protections they enjoy today as part of the EU single market will remain intact.”