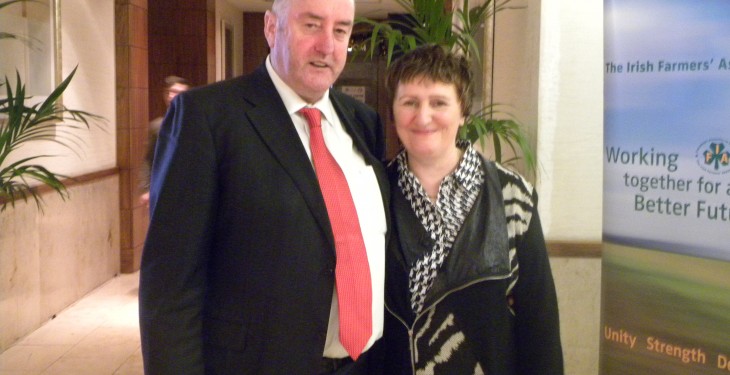 Irish Farmers Association (IFA) president John Bryan has indicated to AgriLand that the Government may well end up funding the next Rural Development Plan (RDP) to the tune of 45 per cent  to 47 per cent of total expenditure . This would be slightly below the full co-funding figure that had previously been demanded by the organisation.

“But this is still a good news story for Irish farming,” he added.

“But there is no doubt that the Government now recognises the pivotal role that agriculture and food are playing at the very heart of the Irish economy. Both sectors are driving exports and creating jobs in a very positive manner at the present time. And I expect this trend to gather further momentum during the years ahead.

“Given this background, I am expecting the Government to come forward with a number of very positive investment backed announcements that will have a direct bearing on the future viability of agri-food. This process will be kicked off with today’s publication of the mid-term forecasts for the Irish economy.”

Looking to the future Bryan firmly believes that Irish food exports will easily break through the €12bn per annum barrier before 2018, which ties in with the presidential term of his successor.

“We are already seeing a tremendous increase in the amount of value added being created by our food industry. This is set to increase at an exponential rate, once milk quotas at the end of March 2015.

“Exports will remain the life blood of Ireland’s farming and food industries. Bord Bía is doing a tremendous job in representing the interests of Irish food companies in markets around the world. But all of this good work must be added to over the coming years. There is also a need to have agricultural attachés based in our embassies around the world, ready willing and able to communicate the very positive benefits of our farming systems at all times.

“My successor can, certainly, look forward to a period of sustained growth for Irish farming,” he stressed

“But there will remain a core role for the IFA within all of this, and that is to ensure that the voices of Irish farmers are heard at the highest level of Government here in Ireland and in Brussels. One of the first challenges confronting the IFA’s new president will be to ensure that the RDP monies are spent in ways that benefit agriculture as a whole. Particular emphasis must be placed on meeting the needs of Ireland’s most vulnerable farmers. In practical terms this means ensuring the suckler farmers and producers in the most deprived pats of the country are adequately supported.”

According to the Department of Agriculture this afternoon, an announcement on the next RDP is expected later this week.