Niall Moore pictured on his farm

Operating on a grazing platform of 75ac, cows are usually let out to grass by mid-March. Herd average yield is approximately 7,000L/cow, at 3.3% protein and 3.8% fat.

Niall Moore and his family milk a herd of 125 British Friesian / Holstein Friesian cows under a split-calving system in Annestown, Co. Waterford.

Prior to installing a Lely Astronaut robotic milking system, Niall was milking in an old 10-unit herringbone parlour; two Lely A4 milking robots were installed on the farm in November 2017. The system was commissioned and milking began in January 2018.

Meanwhile, David O’Donnell runs a dairy herd with his family in Ballingaddy, near Kilmallock, Co. Limerick. They are currently milking 120 cows – 2.1 times per day – with two A4 Lely Astronaut robots.

What made you choose robotic milking?

Thomas said: “The main reason I purchased the robot was to save labour. I was spending five-to-six hours at peak in the six-unit parlour.

It was hard to ask for help as it was taking so long to milk, so things had to change. I am married to Una, with two young children, and the Lely robot has allowed me time to get away for the odd break and spend more time with the family.

“The two Lely robots have given me great freedom and flexibility to come and go as I please.”

Niall added: “If I hadn’t gone down the Lely robot route, I would be looking at installing a 16 or 18-unit parlour and employing an extra labour unit.

“With this system, I am saving labour because I am not milking myself. I plan in the future to look after 130-140 cows on my own for the majority of the year.

“I suppose I had to do the parlour anyway and financially weighing up both options, there wasn’t a big difference.

“Having travelled around locally, I could see how well it was working for people. There happened to be a group of Lely robot farmers nearby in Rathgormack and Clonea-Power that seemed to be doing very well; a great group to look at and all going well.

“The biggest thing I saw on all farms was how happy the cows were.”

However, David’s reasons were slightly different, noting: “We had been milking in a 12-unit herringbone parlour since 2001 and, as the herd grew, we were spending more and more time in the parlour; milking was taking up to three hours morning and evening.

“After seeing the Lely Astronaut in action at the ‘Ploughing’, we went to a Lely open day with a Montbelliarde herd.

What really convinced me that this was the way forward was when I saw two cows coming into the shed together and calmly walking past the crowd to the robot to be milked.

“On the way home in the car, I was discussing it with the lads and asked what they thought; they agreed, robots would be the future on our farm.”

How has your routine changed on-farm since installation?

Thomas said: “My daily chores at the moment involve 10 minutes morning and evening visiting the robot to change the filter sock, wash down the arm and attend to any cows on the Health List. 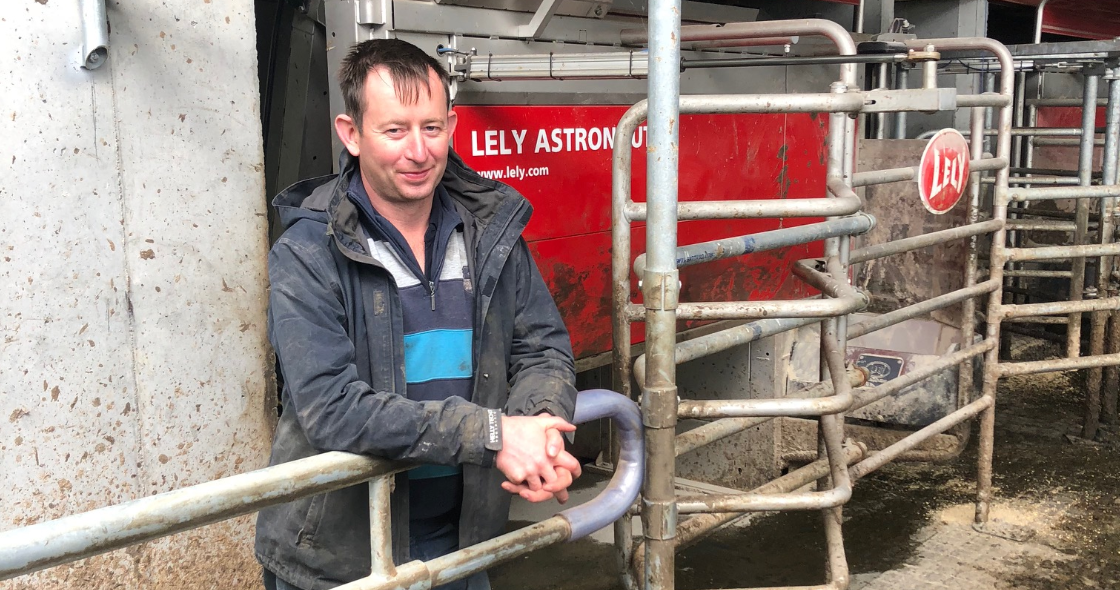 Thomas Prendergast pictured on his farm

“I spend a little more time moving the strip wire and preparing the next grazing for my cows. Granted, I am still busy here, but my time is not spent milking cows.”

David stated: “No early morning alarm calls to do the milking took a bit of getting used to.

“After start up, it took us a month to re-adjust to our new routine. It’s some change when you get up in the morning, look out, and see 80% of the cows already milked and in the paddock, instead of waiting to be milked in the collecting yard.

“The best way I could describe it is that it’s a different type of busy now. You have to plan your day differently, work with the cows and remember to leave gaps open.”

Niall added: “The biggest change for me was knowing that I don’t have to be here at 5.30am or 4.00pm in the evening every day, seven days a week.

You can treat any problem cows during the day when it suits. The flexibility is very important when kids are involved.

“All my kids are involved in sports. I am going to a rugby game on a Saturday and will be gone for the day and I am happy to leave the system to it.

“You can plan your day, whereas before your day was planned for you.”

What’s changed for the cows with the transition to automated milking?

“The cows are currently averaging 20L/day on 4kg of concentrates, with two milkings per cow. This year was a very tough year in terms of weather and I thought it would be more hassle, but the cows are travelling well and milking better than they would in the parlour.

“The heifers, in particular, are performing very well on this system,” Thomas noted.

“Contentment and temperament is very noticeable and cows are less stressed and healthier nowadays.

“Mastitis and SCC have never been a problem here, but the Lely Astronaut milking robot is a great tool for early illness detection.

“While it’s early days, lameness has certainly improved due to cows walking freely at their own pace,” Thomas concluded.

David added: “The cows are definitely calmer and more relaxed. The higher yielders and the fresh cows want to be milked more often, so they can. 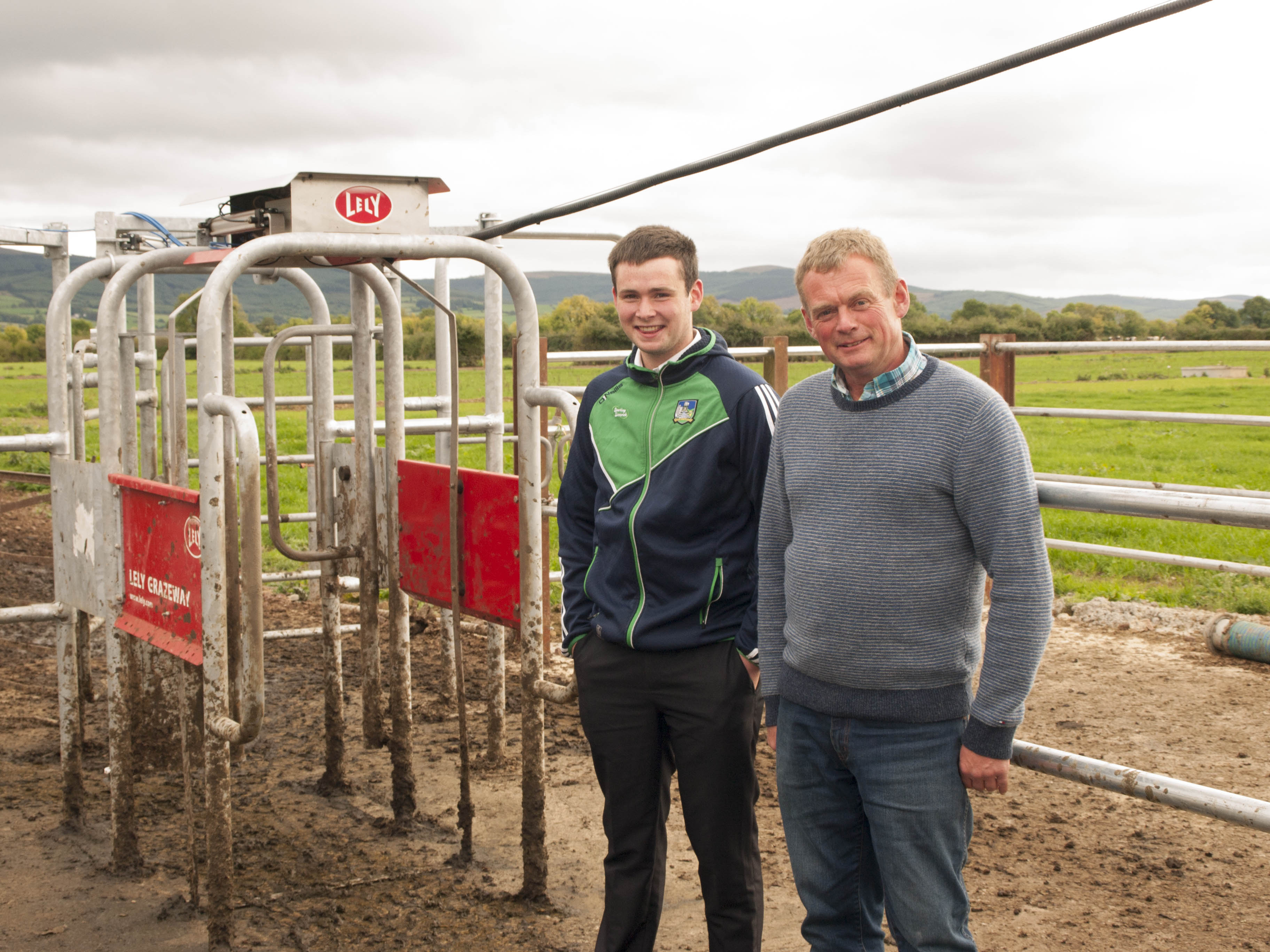 Members of the O’Donnell pictured with their Lely Grazeway

“Today, our best cow is doing 42.4kg and is milking 3.6 times per day and is 25 days in milk. We have a feed-to-yield system on the robots, so she’s getting 7kg, whereas the average cow is getting 4kg.

“It’s a pleasure when you don’t see milk on the slats from cows that were full of milk in the parlour. They still haven’t fully forgotten the evening time milking though, which is not surprising since we only switched over last June.

“You have to stand back and let the cows take over, have patience. I have noticed that the quieter and shy cows visit the robot when I’m not around.”

How did you set everything up for grazing on your farm?

“Between Lely Center Mullingar and myself, we came up with a simple design of an extended lean-to on the existing 86 cubicle cow house.

“The two Lely robots are sitting head to head with a straw separation pen to the back. I also have an underpass to put in this back end to cross the road and access the A block.

“We are currently walking them across in groups and its working for now,” explained Thomas.

Niall added: “This is my first season grazing in a robotic system. I used a 2ac paddock system in the past and my road infrastructure was always good.

“This has allowed me access to a lot of my grazing block without having to make many changes to the existing roadways.

“I am running an ABC paddock system off one block; however, we recently completed the construction of a relatively small underpass to allow me access to another block of ground that was cut off by road.

“I am surprised how well the cows are travelling considering it’s their first season and, as a result, I don’t have any cows to be collected when I’m changing the wire. If my grass is managed correctly, it allows cows to move and think for themselves,” Niall commented.

David goes into more detail, noting: “Our aim is to have cows out 10 months of the year if possible. We are using an ABC grazing system on an 85ac grazing block around the parlour.

“The Lely Grazeway is an excellent tool and it’s amazing to see how smart cows are and how fast they get used to it, after a few days training. They already understand when the gate change times are allowing them out to a fresh paddock.

“As the herd expanded, we needed more grass so we invested in a zero-grazer in 2013 to draw in grass from an adjoining farm, at the shoulder ends of the year or when grazed grass was tight.

“The aim here is keep grass in the diet for as long as we can; it’s the one ingredient to really get milk out of cows.

“Once you have grass in the diet, they respond well. On two separate occasions, we zero-grazed during the Christmas period and the milk jumped by 2L/day the minute grass was introduced.

“When we were short of grass this summer, the C block became the feed passage in the shed. The cows had access to silage or zero-grazed grass, but only if they went through the Grazeway between 6:00pm and 2:00am.

“For the other 16 hours, they were outside in the A and B paddocks. This worked really well and I feel this structure will help us graze next spring,” he added.

David O’Donnell and family, along with Lely Center Mitchelstown, invite you to their farm open day on Tuesday, October 9, in Ballingaddy, Kilmallock, Co. Limerick.

The farm will be signposted from the R512 Kilmallock to Kildorrery road. Eircode: V35 AV85.

The Moore family, along with the Lely Center Enniscorthy, invites you to come and see its Lely Astronaut milking system on-farm in Annestown, Co. Waterford, on Wednesday, October 10, from 1:00pm-4:00pm.

The farm will be well signposted from the N25 at Kilmeaden Village.

For more information, please contact David Redmond from the Lely Center Enniscorthy at: 087-2597861.

The farm will be signposted from the N60 (Balla-Claremorris) main road. For more information, call Alan Heaney from the Lely Center Mullingar at: 087-9066479.