Fast and furious at the dublin horse show 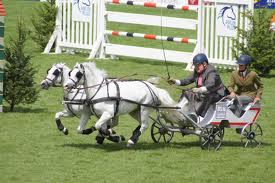 For the first time, the fantastic Osborne Scurry Group performed a series of demonstrations and races at the Discover Ireland Dublin Horse Show today and will continue until Sunday.

Scurry racing involves pairs of ponies pulling light weight racing carriages, galloping and weaving through cones at break neck-speed. It is fast, furious and one of the most exciting, action-packed equestrian sports in the world. The scoring is simple. It’s a race against the clock and a four-second time penalty is added for each cone the driver hits.

This Friday, August 9, the scurry drivers will have grooms of a different caliber as six celebrities have their own race just before the Nations’ Cup team event. The competition is not for the faint hearted!

The 140th Discover Ireland Horse Show was officially opened at 12 noon by the new Lord Mayor of Dublin, Cllr Oisín Quinn, who will arrive at the RDS show grounds in the spectacular Lord Mayor’s Coach. More than 100,000 people across Ireland are expected to attend the premier event over the next four days.