The inclusion of this technology will result in increased fuel efficiency and a better finish on both light and heavy materials, it says.

Last year it introduced the Power Shredder 2 with enhanced shredding technology which is now also incorporated in the hedgecutter range.

There are upgraded features with the Power Shredder 2 technology which include improved geometry for faster response on vertical to horizontal positioning, better hose routing for easier maintenance and improved heat extraction from the hydraulic oil.

Blaney Agri also says that its hedge cutters have a robust design, but can also be tailored to the individual’s needs.

The Blaney range of tractor hedge cutting machinery is available in 3 series.

These are compact, agricultural and contractor models which are built to suit the intensity of the work being done which have an interchangeable reach of 3 to 6.5m.

It says that models can be used by a wide range of users including contractors, farmers and gardeners.

The company also says that the angle of the cutting head can be maintained while the height is being adjusted.

All models are fitted with lift and angle float kits which allows the cutting head to automatically follow the contours of the ground without operator input.

Customers can add a power slew which allows the rotor arm to rotate behind the tractor to cut right into the corners of hedgerows.

The company also says a forward reach arm is available on the contractor series. This allows the cutting head to be forward in the operator’s eye line reducing fatigue and improving visibility.

All flail heads are fitted with bi-directional drive as standard for upward and downward cutting with the choice of direct drive or indirect belt drive system, it says.

The Blaney range of hedge cutters are suitable for anything from hedge cutting to verge or grass mowing along highways, it says.

Safety breakaway is also a standard feature on the Blaney hedge cutter range, it says, which allows the main arm to rotate back if it comes into contact with a fixed object which reduces the risk of damage to the machine.

It has also manufactured a unique excavator cutting head. This innovative design is fitted with flotation linkage which allows the cutting head to follow ground contours.

The new cutting head has been designed for optimum maneuverability to allow closer hedge cutting, it says.

These excavator cutting heads can be manufactured to suit any make and model of digger.

A powerbox is also fitted to ensure that the rotor functions at the correct speed, but it also protects the cutting head from becoming imbalanced, it says. 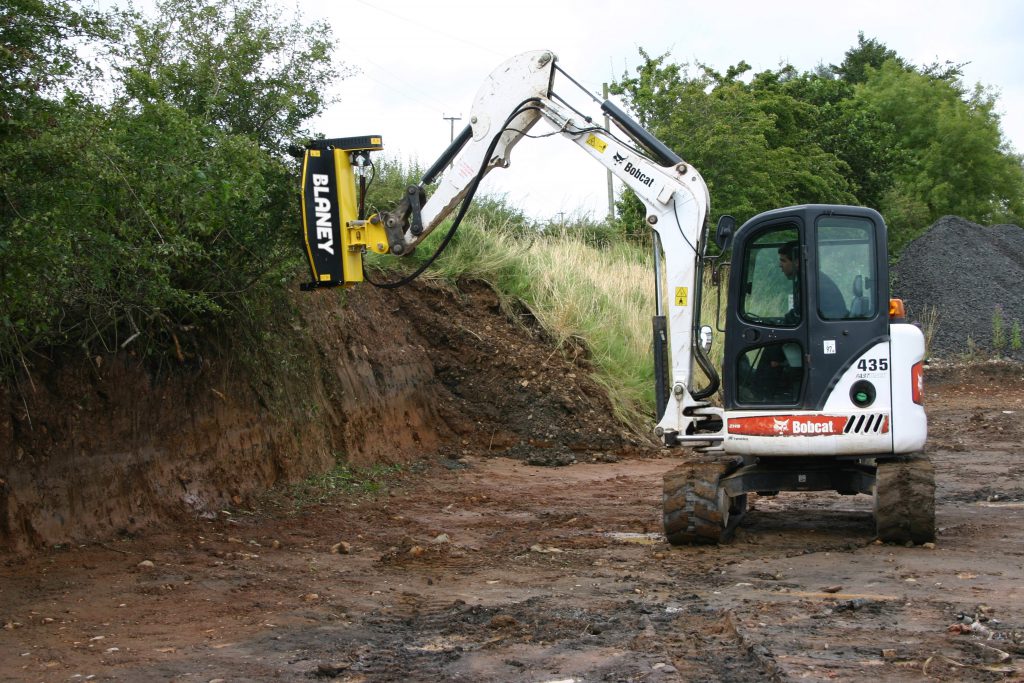