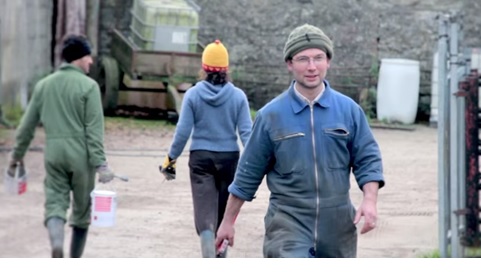 Teagasc says it has received reports of a number of cow close to or after calving attacking farmers.

It is advising farmers to keep the temperament of cows under review and to be particularly careful around cows which have shown signs of aggression previously.

Dominic Leonard is one of the survivors of a cow attack. The Co. Laois drystock farmer was shoved against a wall by one of his cows post calving and he cracked his skull.

“It was calving time, the cows were in the sheds and I went out around 8 to check the cows. A cow took exception to my being, maybe trying to tag the calf or I was too close to the calf, we don’t know. Basically [the cow] just shoved me against the wall and I cracked the back of my skull.

“Somehow I got out of the shed and managed to come back to the house. Unfortunately Saoirse, our daughter who was six at the time, came downstairs and she found me on the floor lying in a pool of blood.

“She went upstairs to get Ali [Dominics wife], and Ali came down and at this stage I think Saoirse was hysterical because she thought I was dead, that I was gone,” Dominic says.

Dominic says he disappeared essentially for four months and that it was very difficult on his wife and children. He says his wife had to learn how to run a farm, along with the house and taking care of their children.

“It was a lot of work for her, it was stressful and traumatic still. Emotionally after a head injury it’s not a good place. My emotions would be all over the place. When I came home I might have burst into tears for no apparent reason and like that for a few months.

“It made life very hard. I lost my independence, I was dependent on someone. It was not as serious as it could have been, because I had insurance. Financially the farm was beginning to look a bit sad, there really wasnt much money left in the account by that time,” Dominic says.

The Co. Laois farmer said that if he was to think back, to before the accident, if he was to say something to himself back then he would have to say that it’s worth maybe putting in another gate now and not waiting until maybe you’ve survived a coma or maybe you haven’t.

“Just to make it as safe as I can so it doesn’t happen again, because it could happen again and I might not be so lucky,” Dominic says.

After the accident Dominic made changes to the farm to make it safer, so that it is not necessary to go in with the calf and the cow.

The Health and Safety Authority (HSA) says that 65% of all farm accidents involve livestock. Teagasc advises to keep the temperament of all cows under close review, but as this trait is heritable, give particular attention to cows which have shown signs of aggression in the past.

“Installing a calving pen where the cow can be haltered from the passageway and where the front gate can provide protection to the operator greatly improves safety. Culling aggressive cow and breeding for docility leads to less risk of serious injury from a cow attack in the long term,” Teagasc says.