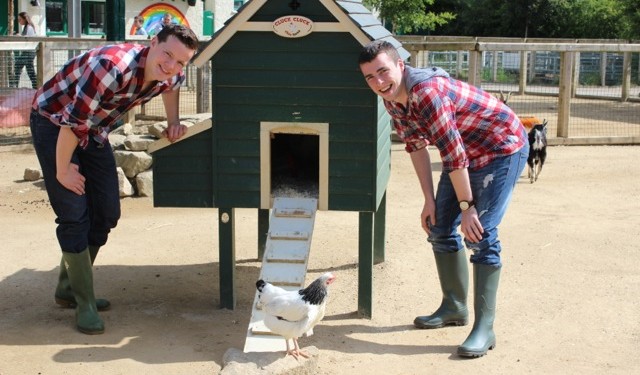 Visitors to Family Farm in Dublin Zoo over the coming months will have a new attraction in the form of Agri Aware’s ‘CAP Agri Ambassadors’.

The new ambassadors, Dallan Shovlin and Darragh Smith, have taken up duty at Family Farm, developed by Agri Aware and Dublin Zoo, and will be telling the story of Irish farming and food production and explaining the benefits of the common agricultural policy (CAP) to the hundreds of thousands who will visit Dublin Zoo between now and the end of September. Visitors can avail of farmyard tours where they can meet the farm animals and learn about Irish agriculture.

The initiative is part of a major information campaign being delivered by Agri Aware on the benefits of the CAP to urban and rural dwellers of all ages. The campaign is co-financed by the EU, Directorate General for Agriculture and Rural Development, the Irish Farmers Association and FBD.

The two ambassadors, both third-level students, beat a host of applicants for what is regarded as Ireland’s dream summer job.

Dallan Shovlin from Stranorlar, Co Donegal, is a third-year student in communications at Dublin City University while Darragh Smith from Dunshaughlin, Co Meath has completed his first year in teacher training at St Patrick’s College, Drumcondra.

At the Family Farm, visitors of all ages can learn about farm animals, food origin and quality. In the farmyard itself, visitors will learn about the animals, from cows to chickens, while in the Farmhouse Classroom, Ireland’s agricultural history comes to life in the Farm’s heritage exhibition complete with touch screens, photographs and video footage.

As CAP reform negotiations reached boiling point in Luxembourg this week, Agri Aware’s newly appointed CAP Agri Ambassadors, Dallan Shovlin (left) and Darragh Smith took up duty at Family Farm in Dublin Zoo.  The ambassadors will be telling the story of farming and food and explaining the benefits of the CAP to the hundreds of thousands who will visit Dublin Zoo between now and the end of September.