Cathal McHugh is a 26-year-old farmer in Co. Roscommon who is in a farm partnership with his father Des.

In April of this year, the McHughs were issued with a compulsory purchase order (CPO) in respect of 14ac of their land – just outside Strokestown – to accommodate a new route that will see the extension of the N5.

The route is now all set to cut straight through the McHugh’s land.

In early May the Minister for Transport, Tourism and Sport Shane Ross approved the construction of the €200 million N5 road project from Ballaghaderreen to Scramogue.

The new road will also bypass the towns of Frenchpark, Bellanagare, Tulsk and Strokestown.

Currently at tender stage, the project will see the installation of 34km of new single carriageway from the western end of the N5 bypass. A contract is expected to be awarded next year and it is anticipated that the road will take three years to complete.

Meanwhile, just six years ago, Cathal and his father Des made the switch from suckler farming to dairy.

They started off with just 30 cows and this year the pair are milking 105.

Going forward I’d like to see us milking 120/130 cows but I suppose we will just have to wait and see now how things go.

Cathal now finds himself in a place where he can’t plan too far ahead because at this stage he cannot determine the impact – if any – there will be on the farm when the new N5 road is built.

For the young dairy farmer with his hopes and aspirations for the future this has become a “very disappointing” turn of events.

And, while Roscommon County Council has provided impacted farmers like the McHughs with a compensation package, as Cathal added: “No compensation is going to make up for losing 14ac of your land and having to reduce or cut cow numbers.”

‘This land is your land’

The new route, meanwhile, is destined to cut straight through the McHugh’s farm and just a very short distance from the farmyard.

It will open up their whole farm making the enterprise very public to passing motorists.

We have a very private set-up here but it won’t be like that when the N5 is built.

Cathal continued: “Our land will be divided with one third on one side of the route and two thirds on the other.

“Where we have two access roads [through the land] for the cows, there will be just one when the new road is built.

“The compensation just doesn’t pay for the hassle and the grief.”

The McHugh’s also know that an underpass will have to be built on their land to allow the cows travel from one side to the other. 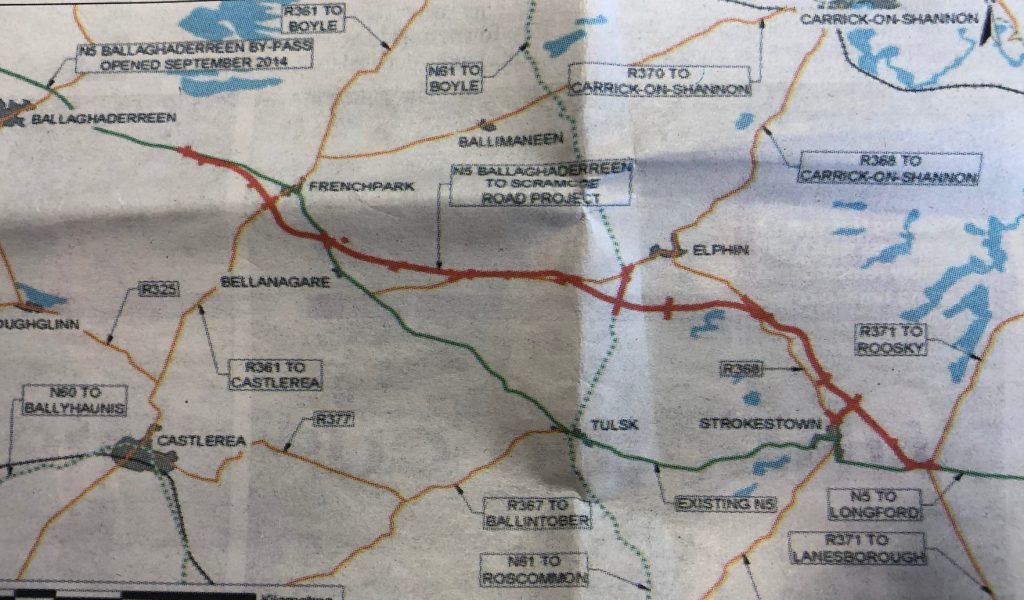 This will be part of the compensation deal, however, its construction will add 1km of walk time onto the animals’ daily routine.

Cathal also pointed to the local opposition to the project while alluding to the fact that the initiative has been in the pipeline “for the last 10 or 12 years”.

“The community here has voiced its concerns about this road; we have our TDs telling us its a great idea, but we all know that this is going to destroy the smaller towns around here like Strokestown, Tulsk and Bellanagare,” he continued.

The passing trade – which is a very important factor to all of these towns – will be lost.

“Anyone around here that is actively farming their land does not want this route to go ahead.

“People are farming because of their love of the land – it’s not for the love of anything else. Seeing it destroyed by a road is very disheartening.”

Will new planning laws see an end to one-off housing in rural Ireland?