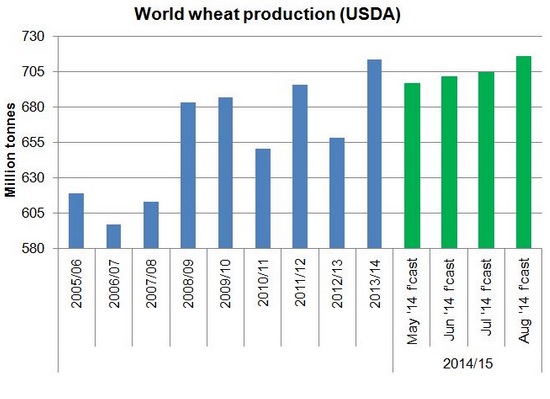 The wheat market has come under intense pressure as the USDA put US and world production higher than the trade expected.

The Government department estimated the US 2014 all wheat crop at 2.03 billion bushels, versus the 1.99 billion it had forecast in July, and the 2.01 billion that the trade had predicted.

According to market reports there was surprise among traders particularly over the hike in global wheat production this year of almost 11 MMT to a record 716 MMT, due to a 6 MMT increase for Russia, a 2 MMT rise for China and 1 MMT extra from Ukraine.

According to Teagasc Crops Specialist Tim O’Donovan Irish farmers are very nervous about prices. “Tillage farmers really need a price at least break even and it looks like that’s the best they’ll do at the moment. Farmers who took conacre and couldn’t have foresaw what would happen to the price are especially under pressure. There is a real depression on the market at the moment.”

He added that: “Pressure is coming on conacre from the livestock sector, and they way cereal prices are at the moment there will be a lot of land not utilised for cereals next year. It is simply uneconomical to do so on conacre land at the current prices.

“Initial reports on yields are good. However, high yields will not make up for the price loss and any negative market news at the moment certainly won’t help.”