A Co. Wexford GAA club will be holding a fodder auction and tractor run tomorrow, December 29, partially in aid of an Enniscorthy cancer charity.

Oulart the Ballagh GAA are hosting the event to raise their own funds, and also for the Hope Cancer Support Centre in Enniscorthy, which organisers call “a very worthy cause”.

The day kicks off at 11:30am, when registration for the tractor run begins in the community centre in The Ballagh – a parish that lies in the extreme southeast of Ireland, to the east of Enniscorthy and north of Wexford town.

Between registration and the tractor run actually getting underway, a fodder auction is scheduled for 12:00pm, which will see hay, straw, silage and washed beet go under the hammer.

The organisers say that the auction will give farmers the much-needed opportunity to get their hands on some fodder stock for the new year.

“This provides a great opportunity for farmers short on fodder to get a hold of some much-needed stock, which could be extremely valuable come the middle of March,” they said.

Among the produce up for sale in the auction are about 150 bales of silage, straw and hay, donated from around 60 local farmers.

The produce is “good-quality stuff”, according to Martin Fortune of Oulart the Ballagh GAA club, who added that: “We would like to thank all the farmers in the locality and beyond who have kindly donated fodder to the cause, given the difficult year it has been.”

“It shows the great community spirit that we have here,” said Fortune.

When all is said and done with the fodder auction, the tractors will pull out at 1:00pm, the proceeds of which will be halved between the club and the Hope Cancer Support Centre. 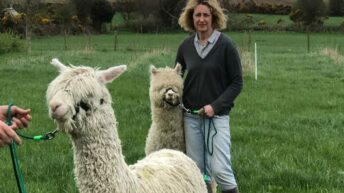