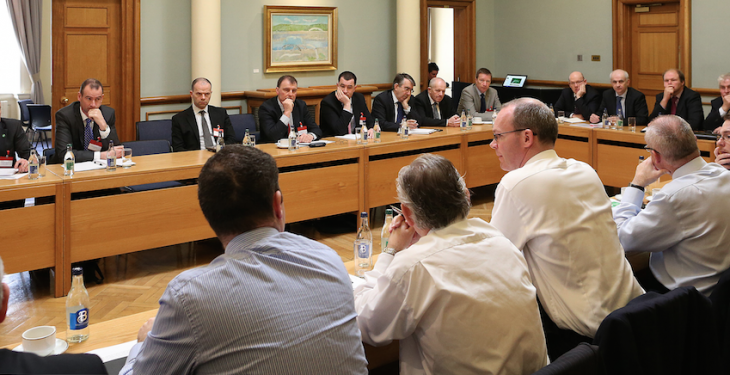 The news this week was dominated by the beef summit, which took place on Thursday when the Minster for Agriculture, Food and the Marine called the key stakeholders together for a beef summit in Dublin Castle. A seven-point action plan was drawn up. There was no regulator appointed and the meat factories responded afterwards saying that they have consistently delivered price increases. IFA President Eddie Downey spoke to us during the week, about the beef crisis, saying it would drive live exports to help beef prices and funding of the organisation.

Further afield, it looks like the Mercosur bloc countries are set to move this stalled trade agreement along again with plans for a proposal to be on the table for Europe to consider before the end of this month.

It seems there is a shortage of young people looking to go into shared farming, according to Macra’s land mobility service. Teagasc held an open day on collaborative farming in Clonmel and farmers heard that the new farm partnership register is to be signed off by mid-summer, but that the land mobility service has more older farmers looking for younger farm partners than young farmers looking for access to land.

It will be a relief to many farmers to hear the country will finish less than 1% over quota this year, although it is believed quite a number of individual producers will be well over and facing significant fines.

The Irish Dairy Board announced its results on Wednesday. It warned of price volatility over the short-term, and told farmers to put something away for such rainy days. On a positive note, IDB’s sales are on the rise and it has cash reserves of €50 million and will be investing €70 million this year.

If you’re still unsure about the future of dairy expansion in Ireland, take a look at our analysis which looks at where we’ve come from, where we’re going and what we need to do.

Farmers in Northern Ireland are being asked to ‘hurry up’ and send in their Single Farm Payment application forms! With less than a month to the deadline over 34,000 are still outstanding.

Some 95% of Irish wool is exported and it seems China is dictating the worldwide wool market, accounting for 40% of global sales.

And finally, for anyone with some spare cash lying around, the UK’s Co-op group is selling its 15 farms, which comprise 17,000 acres. It is hoping to offload the 15 farms as one unit. No guide price has been given – it seems to be if you have to ask the price you can’t afford it!