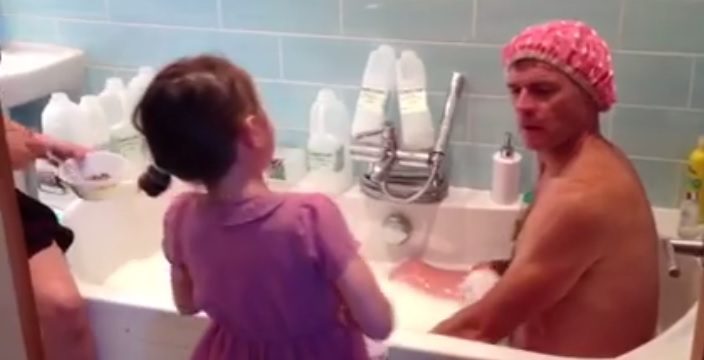 Last year we had the Ice Bucket Challenge this year it’s the turn of the milk bucket challenge to raise awareness of the plight faced by the UK farming industry, the Farming Community Network (FCN) said.

Farmers are challenged to dunk themselves in milk to raise awareness and FCN are also asking participants to donate to the network.

Dunking kicked off on August 10 with UK farmers uploading videos of themselves swimming, diving and dunking themselves in milk.

Many farmers have already taken part in the challenge with some really crafty challenge videos.

Once such video is from Joanne Jones, the Co-ordinator for the FCN and a dairy farmer, where she puts on a cow onesie and with her inflatable tyre proceeds to jump into a pool of milk.

One farmer has also gone to the extreme lengths of bathing in milk and his video has 90,000 views already.

Nick from Devon YFC is asked by one of his daughters why he’s washing his hair with milk.

To which he replies: “Well it’s cheaper than water and I’m worth it.”

For some very strange reason 56 k have watch this clip. Let hope that’s 56,000 that support British Farmers……. Thank you FCN milk bucket challenge to raise awareness of the plight faced by the UK farming industry. Dunk yourself in milk & text FCNM22 followed by the amount to 70070. It can be between £1 & £10. E.g. Text FCNM22£5 to 70070 to raise money for FCN – a charity that supports farming families through difficult times. Please buy your milk from a farmer or a retailer with a responsible milk sourcing policy. # FCNmilkbucketchallenge #buylocal #lookfortheredtractor Please copy @The Farming Community Network into your Facebook posts & @FCNDevon into your twitter posts.