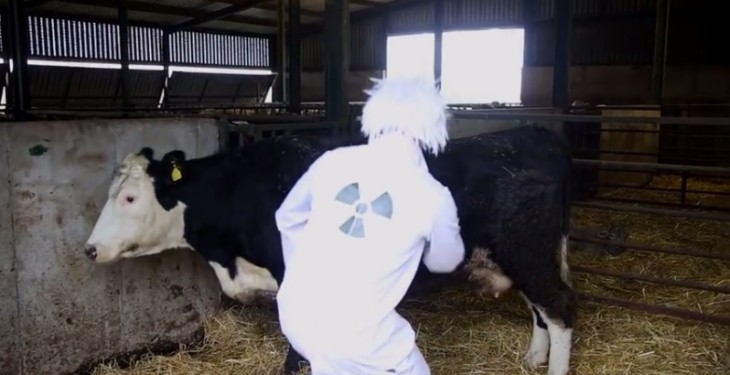 One such candidate is the Fine Gael TD for Kildare South, Martin Heydon, who has styled himself as a modern day Marty McFly.

Heydon launches off into what he has done so far in his position, which also shows him working on his farm, before being interrupted by Doc Brown.

“Quick Marty, you gotta come with me! The future of Kildare South and the country depends on it.”

However, Heydon tells Doc that he’s busy right now that Daisy is about to calve, but Doc being able to tell when Daisy will calve with some sort of gadget tells him that the calf isn’t due for another week.

“Look Marty you’ve got to come and remind the voters the great work you’ve done in this constituency over the past five years.

“If we don’t, the consequences are dire and you’ll lose your seat.”

Doc fills the car with weanling creep ration to get it going and they take off in the DeLorean around the Kildare South constituency.

Moving to Kerry and Michael Healy Rae has released not one but two campaign videos aimed at helping his cause with voters.

The first is a cover of Marty Mone’s Hit The Diff, but Healy Rae has called it ‘Make The Diff’.

Healy Rae sings in the video himself:

Make your vote and pray, that he goes all the way. He’s flat to the mat with his black cap and there’s no time for tae.

“Make the diff and vote him in, it’s Michael Healy Rae.”

He also released a second video covering Walk the Moon’s Shut Up and Let Me Dance but has called it Back to the Dail.

It shows McGrath making his way around his constituency and also with boxing gloves with the names of two of his rivals, Fine Gael’s Tom Hayes and Labour’s Alan Kelly, taped to them.

Looking to Cork and Jerry O’Sullivan an Independent running in Cork North West has a video for the election.

He believes that his video tells you a little about him and his position on issues facing us all. It’s called the Road Song and it shows him on the road around his constituency.