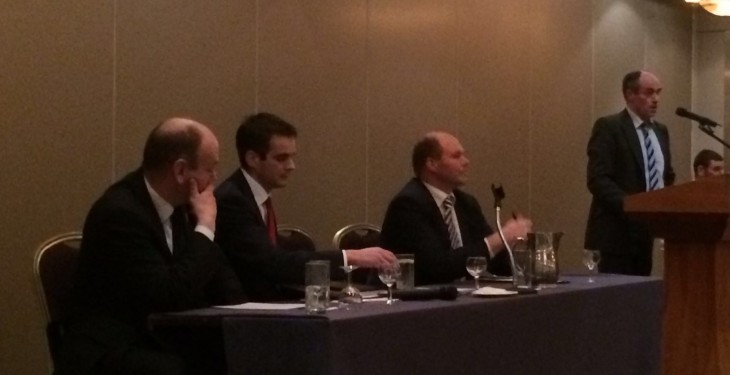 A strong crowd of around 200 people attended the meeting at which the three Presidential candidates, Flor McCarthy, Joe Healy and Henry Burns, were all questioned about the levies issue.

Up first was Joe Healy, who said that there is a lot of disquiet out there amongst farmers in relation to the levies.

“If they are to stay as they are, farmers need transparency [on them]. We do need to sit down and come up with an alternative to them.”

Flor McCarthy said that the levies are a major part of IFA income and that farmers feel that they pay the big wages.

Should he be elected, he said that he will look at alternatives to the levies, such as raising the membership in IFA.

Next up to answer the levy question was Henry Burns, who said that he doesn’t believe that any levy should be compulsory.

“There are other things to consider, such as Macra, which takes a good chunk of the levy.”

Meanwhile, earlier in the evening the Deputy Presidential candidates were also asked about the levies.

Limerick’s Richard Kennedy said that levies have come up as an issue every night of this campaign, particularly in the meat factories.

“It needs to be taken seriously by the association. As far as I can see the levies cannot continue as they exist at the moment.

“I’ll have to qualify how that income would be made up [should the levies go].”

Pat Farrell responded by saying that he’s hearing what IFA members are saying with regard to the levies.

“We have to look at some formula of collecting the money without the levy.”

Alternatively, Nigel Renaghan said that he has come up with a solution to the levies issue.

“It was mentioned that we should park IFA telecom.

“There’s 13,000 members in it, if all of our members took out a phone through IFA telecom we wouldn’t need to collect it at the factory.”

Other issues that came up at last nights debate were farm incomes, price volatility and farm safety.