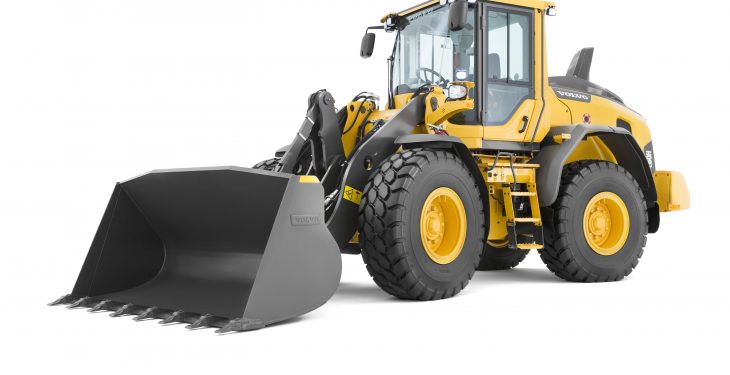 Every summer, these machines (along with JCB, Komatsu, Caterpillar and other counterparts) travel from one farmyard to another, building silage pits in rapid succession.

But where did these machines originate from and how were they developed?

It all started in Sweden in 1832, when Johan Theofron Munktell founded an engineering workshop in Eskilstuna. There, he produced printing presses, traction engines and threshing machines and even Sweden’s first steam locomotive.

As the business grew, production moved to nearby Hallsberg. This site remains a Volvo Construction Equipment factory to this day. In 1913, the factory produced the first Swedish tractor.

The two companies merged in 1932, under the name AB Bolinder-Munktell (later to be known simply as BM). During the 1930s and 1940s BM produced a range of farm machines, most notably tractors.

Meanwhile, during the 1920s, the Volvo car manufacturing company was established. BM worked together with Volvo to manufacture tractors and other equipment.

By 1950, BM had been acquired by Volvo. Major milestones were reached with the production of the first diesel-powered tractor in 1953, followed by the first wheeled loading shovel in 1954.

The Lihnell company, from the south of Sweden, joined the fold in the years that followed. This collaboration resulted in the world’s first articulated hauler in 1966. That machine was the forerunner to today’s 6-wheel drive, pivot-steer dump trucks (A25G, A40G, etc).

By the mid 1970s, the name had changed to Volvo BM – a name that will be familiar to many Irish farmers and contractors.

The company then began to concentrate on the development and manufacture of machines such as wheeled loaders and articulated dump trucks. Agricultural tractors were no longer part of the product mix.

In the mid 1980s, Volvo BM merged with Clark Equipment Company to form the VME group. Its roots stretched back to the early 1900s. Clark, through its Michigan brand, was involved in the manufacture of loading shovels and other construction equipment. Clark had also acquired Euclid, an American company best known for its range of heavy-duty haul trucks.

Clark Michigan, as a brand, did have a presence in Ireland in its own right. Some Irish agricultural contractors of an older vintage will have fond memories of the Clark Michigan 35B.

These were, in some parts of the country, regularly seen scaling steep silage pits during the summer months.

Yet another acquisition was that of Zettelmeyer. Hubert Zettelmeyer had founded a road construction business in Germany in the late 1800s. The company later began to produce its own machines; the first being a steamroller. By the 1950s, Zettelmeyer had become an established manufacturer of small wheeled loaders. VME bought Zettelmeyer in the 1990s.

Higher up the food chain, also during the 1990s, the Volvo group bought out Clark’s stake, giving it complete control of VME. That triggered yet another name change; this time from VME to Volvo Construction Equipment.

Volvo’s, or rather BM’s, first wheeled loader was the H10. Where did it come from?

To start with, engineers simply turned an agricultural tractor back-to-front. By placing the loader unit over the bigger wheels, they reasoned that it would be capable of lifting heavier loads.

The H10 wheeled loader was based on a series of different tractors, including the BM 470. The H10 was a major success at the time; it was the world’s first wheeled loader with a parallel linkage, double-acting lift rams and a purpose-designed attachment bracket.

1959 saw the introduction of the LM218. Though broadly similar to the H10, it was designed from the outset as a dedicated loading shovel (instead of being based on an existing tractor). This approach enabled the engineers to fit purpose-built axles and wheels, along with a heavier counterweight. It was also the first shovel to officially bear Volvo’s characteristic yellow livery.

The 1960s saw the advent of the LM620 and LM640. These had brand new transmissions, with torque converters and powershift gear-changes (4F 4R). Notably, the LM640 was equipped with 4-wheel drive.

With the launch of the LM845 in 1970, Volvo moved to articulated-steer loaders. Previous rear-wheel steer units, while capable, had cab doors that opened forward. This created all sorts of access problems, especially with a load on the front.

The frame-steered loaders boasted a smaller turning circle and much improved manoeuvrability. There was no going back. However, the LM845 still had different sized front and rear wheels, just like the earlier ‘back-to-front’ machines.

Other leaps forward included the fitting of a Z-bar linkage and newly-designed attachment brackets.

The late 1970s heralded the arrival of the 4300 and 4400 models; the heavy-duty 4600 appeared in 1980. Many of these machines would later find their way to Ireland, typically working in quarries but also on larger farms and in agricultural contracting fleets.

1991 saw the arrival of the next-generation ‘L’ series, characterised by the distinctive, square-cut Volvo Care Cab and a new lift arm system. These machines were new from the ground up, with a new frame, transmission and axles.

The following year saw the advent of load-sensing hydraulics, initially on the L50B – the first Volvo loader with this feature. This system delivered the exact quantity of oil needed for each operation. 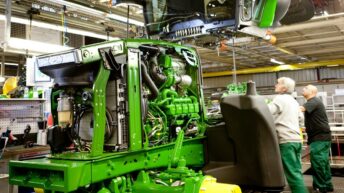